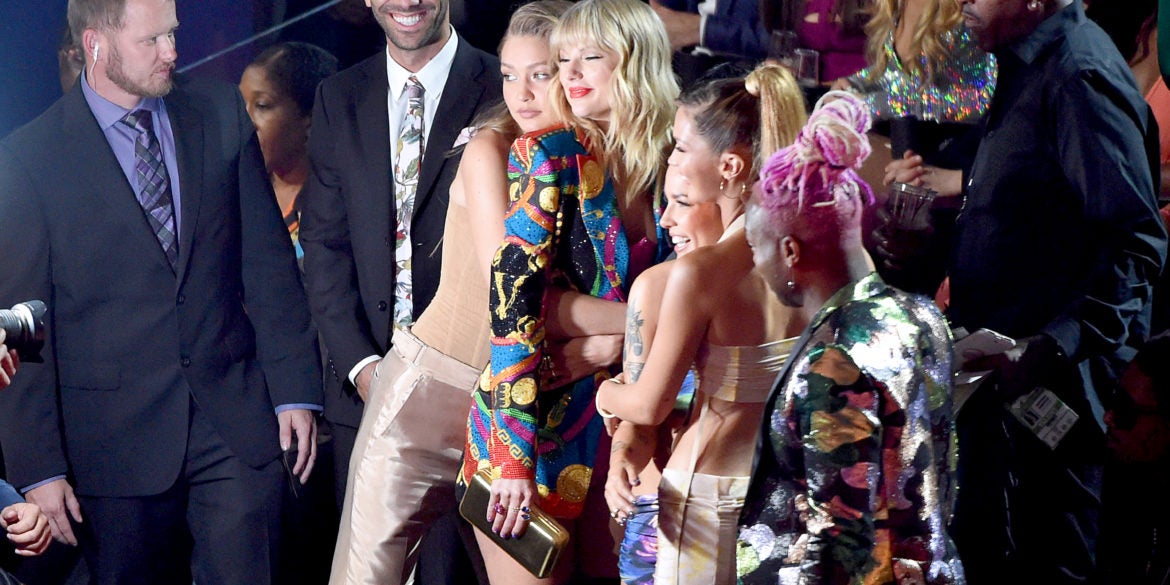 By: Aron Ranen, with Maggy Donaldson in New York

Pop superstar Taylor Swift lit up MTV’s annual Video Music Awards Monday, taking home the award for Video of the Year and nodding to her winning song’s celebration of LGTBQ rights in accepting her prize.

Swift was among the top award-getters at this year’s edition of the awards show held in Newark, New Jersey and considered television’s wildest night for its eminently meme-able viral moments.

Swift nabbed the coveted award for her track “You Need to Calm Down” on the heels of releasing her new album “Lover,” which became the year’s top US seller after just two days.

“In this video several points were made,” Swift, wearing an oversized rainbow-colored suit jacket, said to applause.

That it won the fan-chosen award shows that “you want a world where we are all treated equally under the law,” the 29-year-old said, noting the video ended with a petition in support of the Equality Act, which would prevent discrimination based on gender and sexual orientation.

Swift, one of the night’s top nominees, also won an award for the top “Video for Good,” thanks to her clip’s anti-homophobic message — though when it was released, just in time for Pride Month, the star was accused by some critics of using LGBTQ imagery as a marketing technique.

After Elliott electrified the audience with a medley of her greatest hits including the classic “Get Ur Freak On,” rap queen Cardi B dubbed the 48-year-old rapper a “living legend” in presenting her with the iconic moon man statuette.

“I promised I wouldn’t cry; I cry every award,” Elliott, wearing a black leather hoodie tracksuit with gold trim and a visor, said before nodding to her storied career: “I’ve worked diligently for over two decades.”

A notably absent Ariana Grande, who posted a banner first half of the year, won three awards including Artist of the Year.

Breakout artist Billie Eilish, who couldn’t attend because she’s on tour in Russia, won the trophy for Best New Artist.

“Videos and visuals have been one of the top priorities in my life,” the 17-year-old said in a pre-taped video clip. “It feels really, really good to be recognized for that.”

Swift — donning her signature red lipstick, along with a gold bustier and matching booties paired with a glittering violet hot-pant suit — had opened the show with a rainbow-colored performance of “You Need to Calm Down” and “Lover,” guitar in hand.

Speaking earlier on the red carpet, she alluded to the infamous incident when rapper Kanye West crashed her attempt to accept an award for female video of the year, telling the audience it should have gone to Beyonce instead.

A decade later, Swift said with a smirk: “You never know what can happen on this show, I have learned.”

Cardi B — sporting a gladiator-style crimson dress with booty-high slits that showed off her enormous peacock tattoo — won the award for Best Hip Hop Video, while Spaniard Rosalia and Colombian J Balvin took home the prize for top Latin video for the hit “Con Altura.”

“Thank you for allowing me to perform tonight singing in Spanish,” Rosalia said to cheers, while J Balvin urged more support to go towards protecting the Amazon rainforest that is currently ablaze.

The duo performed a steamy rendition of that hit, which jumped this week to overtake Eilish and Lil Nas X on the top US songs chart.

In a hat-tip to the host city, local legends including Queen Latifah and Redman performed a medley of rap songs that came out of New Jersey, while cast members of the iconic show “The Sopranos” appeared among the gala’s presenters.

Fellow Jersey natives The Jonas Brothers, who took home the award for Best Pop Video, delivered a filmed performance offsite at the Jersey Shore’s Asbury Park, where icons including Bruce Springsteen were regulars.