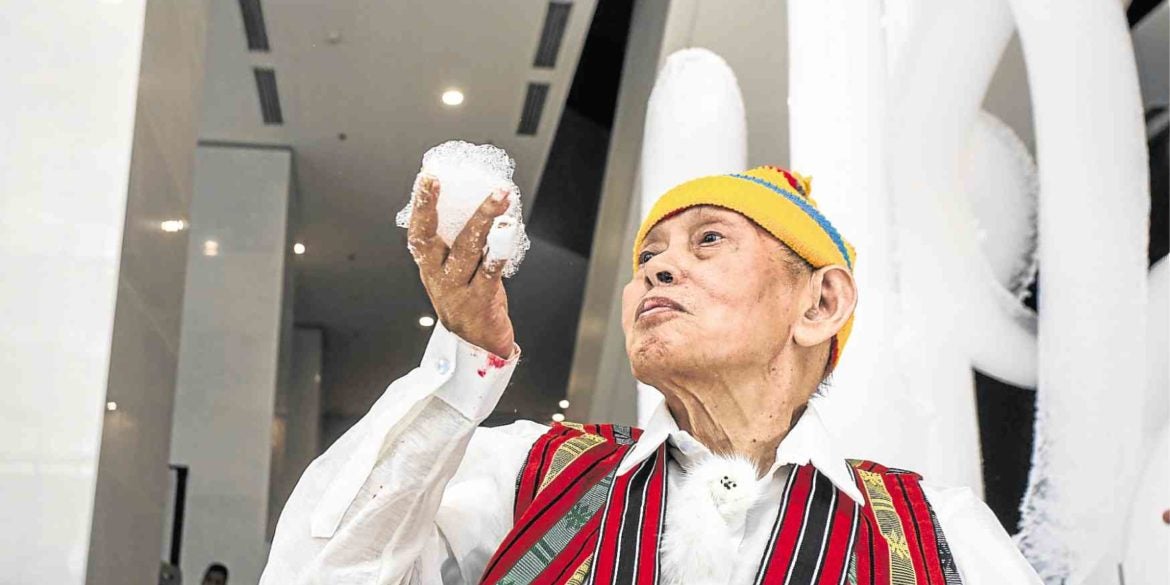 This acquisition is a watershed moment in PH corporate art. The first in the Medalla series in 1961 was lauded as the first ‘auto-creative’ sculpture, drawing praise from Marcel Duchamp. Its variations have been seen in museums worldwide

A watershed moment in Philippine corporate art is the acquisition by Banco de Oro (BDO) of David Medalla’s “Cloud Canyons No. 31,” for display in its Ortigas headquarters.

The artist himself was guest of honor at the unveiling last Aug. 31 at the BDO Corporate Center in Ortigas, where the kinetic sculpture will be on permanent display in the lobby.

Medalla is acknowledged in the international contemporary art scene as a leading figure in conceptual, performance and participatory art. Although he has spent most of his creative life in Britain, he returned to the Philippines earlier this year.

Art has become an increasingly important means of corporate image building. Traditionally, companies have preferred its public art to be more “monumental,” carved in stone or forged from steel, their static mass communicating stature and permanence.

Meanwhile, corporate collections tend to be defined by the tastes of its top executives, although many companies now hire art consultants to vet its acquisitions.

If one were to hazard a guess, BDO’s decision to go in a more avant-garde direction might have something to do with Mara Coson now overseeing its art collection.

Though better known in hip circles as a writer, the Sy scion is apparently as plugged into the global contemporary art scene as her visual artist sister, Nicole.

“Cloud Canyons No. 31” is essentially a bubble machine, though hardly anything like the ones you see at children’s parties or a nightclub floor show.

Six clear Plexiglas columns on a white Formica platform, containing the mechanism for generating a continuous volume of white foam, is the medium, but the foam itself is the sculpture, as it cascades down the tubes, forming a constantly morphing mass of shapes, changing and evolving from moment to moment.

Medalla has said he was inspired by childhood memories—of his mother cooking guinataan, the bloody foam from the mouth of a dying guerrilla during the Japanese occupation, beer foam from a vat in a Scottish brewery, and clouds viewed during a Manila sunset.

When Medalla made the first in the series in 1961, it was lauded as the first “auto-creative” sculpture, drawing praise from no less than Marcel Duchamp, who created a series of sculptures he called “Medallic Object” in honor of the Filipino artist.

Now considered a landmark in contemporary art, “Cloud Canyons” has become Medalla’s signature work. Variations have been exhibited in museums and galleries throughout the world.

First exhibited in London in 1964, “Cloud Canyons No. 3” has since been acquired by the Tate Modern.

Other works in the series have been acquired by the National Gallery of Singapore and other museums.

Acquiring such a historic and significant piece is quite a coup for BDO.

“The most important thing is to give life to materials, so that instead of finding ourselves separate from them, we find a complete dialogue with the material,” Medalla was quoted as saying in 1968.

Even from his wheelchair, the 77-year-old artist cut a striking sartorial figure with a brightly colored Nordic ski hat, a vest of indigenous weave over a barong Tagalog, Mondrian socks and a pair of white Crocs. Appearing with Adam Nankervis, his constant companion, Medalla apologized for his hoarse voice.

In any case, he said it all with a couple of artistic gestures: taking a handful of white foam and blowing into the air, and playfully blowing air through a straw into a glass of soda.