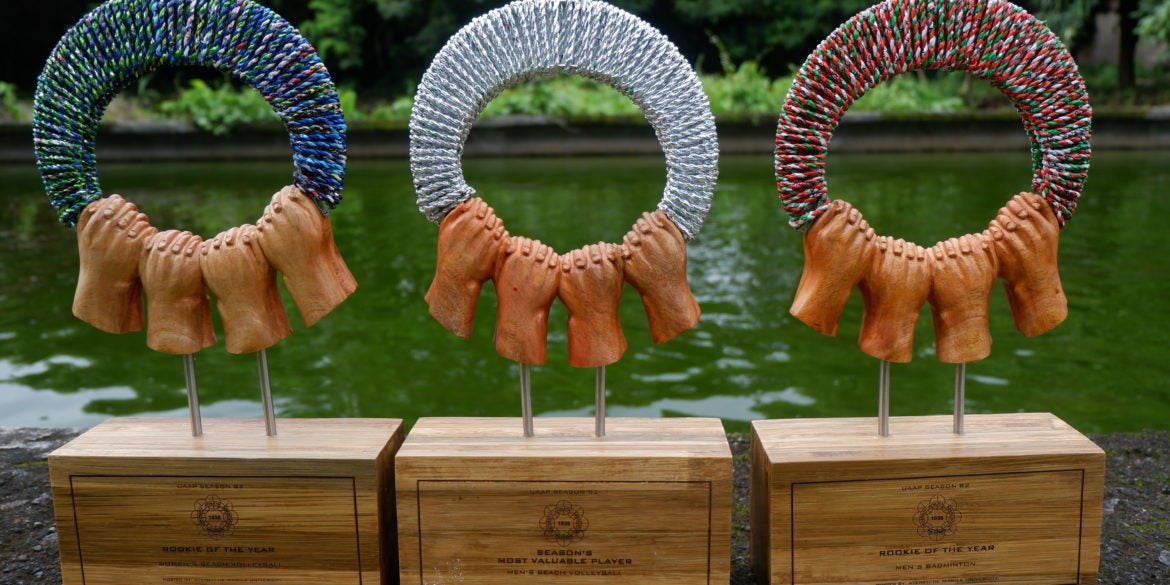 UAAP trophies are made of repurposed bamboo and wood carved by an Ifugao carver. —Photos by Angellizza Ramirez

UAAP Season 82 medals made of bullet shells from Marawi siege

Trophies use recycled bamboo and wood

In a show of sustainability, Tokyo, the host of the 2020 Summer Olympics, recently announced that it’s using recycled mobile phones and other electronics to make the gold, silver and bronze medals.

The medals are made from bullet shells, doorknobs and pipes from the 2017 Marawi siege. Brassmaking in the city uses scrap materials instead of metal from mining, a practice that destroys the environment.

The straps that hold the medals are made from plastic trash collected from Taal, Batangas, and woven by members of the Maranao tribe. Weaving has been the tribe’s therapy since its city was destroyed in the armed conflict between rebel groups and government forces.

Apart from being sustainable, these medals make winning much more meaningful, as they represent history and the efforts of people to overcome crisis.

Season 82’s trophies are made of sustainable materials such as repurposed wood and bamboo, carved by an Ifugao carver.

The trophies show hands joined together holding a ring, a symbol of victory through unity, according to AdMU president Father Jett Villarin, SJ, in his opening ceremony speech.

More than being competitors, the teams of UAAP’s member schools, he said, should be one big community, as well as models of good sportsmanship.

Wilhelmina Garcia and her interior design company Junk Not designed and transformed discarded materials into medals and trophies. The firm also collaborated with indigenous people, making the awards more relevant and special.

Ultimately, the UAAP is much more than sports. It touches lives beyond its member universities, and gives hope to those who need it.—CONTRIBUTED