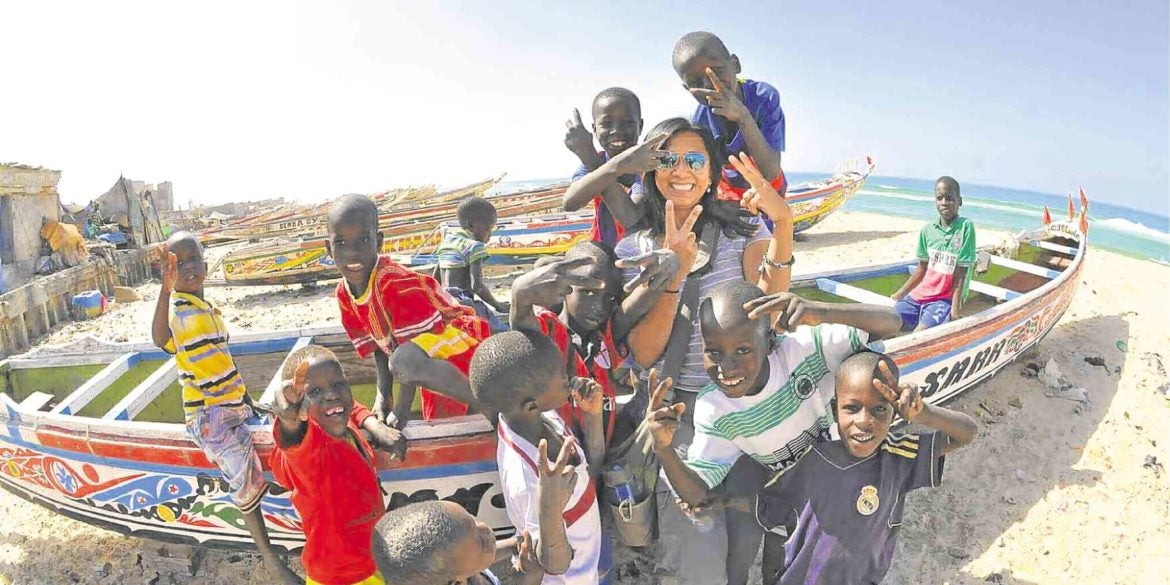 From Sudan to Africa, from the biblical route to the path of Alexander the Great—they choose the road less traveled

“He did not think of himself as a tourist; he was a traveler. The difference is partly one of time, he would explain. Whereas the tourist generally hurries back home at the end of a few weeks or months, the traveler, belonging no more to one place than to the next, moves slowly, over periods of years, from one part of the earth to another. Indeed, he would have found it difficult to tell, among the many places he had lived, precisely where it was he had felt most at home.”—Paul Bowles, “The Sheltering Sky”

At a convivial dinner party south of Manila, three members of the newly minted Philippine Global Explorers gathered to talk about their plans.

Once they started swapping travel stories, however, it could have been a gentlemen’s club of some bygone age where adventurers gathered before a blazing fireplace to recount tales of going to the farthest reaches of civilization and beyond, encountering wild creatures, roaming the ruins of ancient cities, and experiencing first-hand the truth that all men are brothers.

Except, of course, that now, women are equally adept at going where few have gone before.

“You are probably looking at some of the most well-traveled Filipinos here,” says Riza Rasco, the group’s lead convenor.

On sabbatical from her job as a biotech executive in the United States, Rasco herself has just returned from a journey through Scandinavia, Russia and Siberia, ending with a bracing plunge into the freezing waters of Lake Baikal, the largest freshwater lake in the world.

Also on hand were lawyer Dominador Buhain and Marcelino Mendoza.

Buhain is a book publisher and, like Rasco, a longstanding member of the Travel Century Club, a society of travelers who have visited at least 100 countries or territories.

Now 75, he is still ticking countries off his bucket list. The last item: space, which he hopes will be accessible to travelers in his lifetime.

Mendoza, who runs a socialized housing developers’ group, is not a member of the Travel Century Club, but he has walked in the footsteps of the Buddha, traced the Ganges from its origins in Gangotri in the Himalayas to its exit at the holy city of Varanasi, and traversed North Korea from the Chinese border to the DMZ.

Think of them as the League of Extraordinary Travelers.

In an increasingly homogenized global culture where everything is becoming Disneyfied by mass tourism, they go the extra hundred miles or two to seek out authentic experiences of other lands, other cultures.

Many Filipinos’ idea of travel is taking the Koreanovela tour of Seoul, a weekend at Hong Kong Disneyland, or taking selfies at the most cliched tourist spots in the world.

The Philippine Global Explorers is interested in going beyond, off the beaten track, where the romance of travel still lives and breathes.

This is not snorkeling in the Maldives, a shopping spree in Kuala Lumpur, or a culinary tour of the hawker stalls of Singapore.

For Rasco and her fellow travelers, it could be Cameroon, where wild gorillas thrive; or Christmas Island, overrun by red crabs, where Australia “houses” refugees and asylum seekers; Togo, where the ancient African religion of vodun, or voodoo, originated; or magical places like Caral in Peru, where you can see 5,000-year-old pyramids unhindered by tourists, who are all at Machu Picchu four hours away—anywhere where one can still have an authentic, unfiltered experience of the world in all its wonderful weirdness.

“The purpose of the Philippine Global Explorers is to bring travelers together to form a network,” says Rasco. “It’s going to be open to any Filipino traveler. As of now we have 10 starting members. The reason it’s good to be part of a network of travelers is to share resources.”

Most adventure travelers journey by land, where border crossings can pose challenges quite different from the immigration and customs hassles one encounters in major airports.

Each destination is different, and some journeys—say, from Peshawar in the Pakistan tribal areas to Kabul in Afghanistan—can only be done with a reliable local guide.

Don’t expect any B&Bs either.

“Accommodations are very basic,” says Rasco. “It’s usually just a bed in someone’s home. And sometimes the conditions are not very sanitary at all. But we go through all that to see how people really live in these places.”

Knowing beforehand how to navigate the terrain, where to find help, how to get along with the locals—information found only in certain travel forums and websites—could prove critical.

With the Philippine Global Explorers, anyone interested in planning a trip to, say, the Sudanese desert to see the Nubian pyramids, which are older than Egypt’s, can find out the best and safest route from other travelers who have been there, where to find a room, what to eat, and so on.

“The reason we formed the group is to entice other world travelers, share information for future travels, and create peace and harmony instead of hostility,” says Buhain.

“Also to provide support and help for young world travelers,” adds Rasco. “Neo-globetrotters. Some of us have access to those resources, and we can relay that information to young travelers. I think this is the future of travel.”

The usual travel advisories need not be a hindrance, but is it safe?

“I took a nine-month trip to Africa in 2015, circumnavigating the continent and visiting over 30 countries,” says Rasco.

“I just did it by land, visiting villages and all that. My experiences have been positive, there was not a single time I felt my life was in danger while I was there. I had pepper spray and a personal alarm, but never once did I think of using those. By and large, you’ll be surprised that, in general, people are good, all over the world. There are only a few bad ones, the chance of you coming across one would be the same anywhere in the world, or if you had just stayed home.”

Adds Mendoza: “In my experience, the bad ones are usually in the touristy places.”

Buhain recounts the time he was mugged in Oslo and woke up the next day stripped of all his belongings.

There was the time he was held at the Bulgarian border, where the sheer number of visas on his passport aroused suspicion. He ended up in jail in Montenegro, where he spent five days before being sprung after some “under the table” negotiations.

In another incident, he and his party were inexplicably attacked while riding the Trans-Siberian railway, and they had to fight the attackers off.

Even these hassles and snafus are part of the adventure.

“Off the beaten track, when you immerse yourself in the culture, that’s when you get the real great experiences,” advises Mendoza.

“We are independent travelers. We feel constricted by the itineraries of tour groups. Avoid the tourist traps, look at the highlights but go deeper. Find out how people really live their lives. That’s more interesting.”

It’s also best to keep an open mind when on the road, say our extraordinary travelers.

“I went to Ethiopia with just one image in mind: starving children,” recalls Rasco. “And it’s nothing like that at all. It’s a beautiful country, the landscape, the people, the food.”

Some people, it seems, are just born with this wanderlust. Rasco, who grew up in Los Baños, Laguna, says she’s always wanted to go out and explore the world.

“We had a kind of forest in Laguna and I was prohibited from going there and climbing trees, but I went anyway,” she recalls. “I always wanted to go on an adventure.”

Eventually, she built a career in biotechnology, working for Dupont and later, Johns Hopkins Technology Ventures in the United States.

“I’ve always been passionate about traveling, but it was only in the last five years, after my mom died, that I intensified my traveling,” says Rasco. “I realized that life is short, so I traveled more and started a blog called ‘Midlife Funk,’ because at the time I was kind of depressed and restless. I took a sabbatical and now I’m traveling full-time.”

She has started Explore Africa for Impact, a travel agency and social initiative based in Togo that aims to encourage travel to Africa to benefit the local communities there, ploughing profits into education and women’s projects.

“My heart is in the Philippines, but my soul is in Africa,” she says. “Ethiopia is my top country. Civilization started there and it’s the seat of orthodox Christianity. I like Rwanda, Namibia, Cameroon, Tanzania, Botswana, South Africa and West Africa. Africa remains my favorite place.”

For his part, Buhain was first bitten by the travel bug after a family trip to Japan, Hong Kong and Singapore.

“My eyes were opened to the beauty of the outside world,” he says. “From then on, I imposed upon myself to work hard, save a lot, keep in good shape so I could pursue more travels.”

His brother encouraged him to join the Travelers Century Club, which he did about 30 years ago.

At 75, Buhain now travels with an assistant, and makes use of the wheelchair facilities whenever possible, but he’s not done with his travels just yet.

“Let us always seek Divine Intervention in order that the three important requirements to satisfy travel which are money, time and health, will always be present when we decide to travel,” he prays.

“For me it’s all about the journey,” says Mendoza. “It’s not really the destination. Essentially, I like ancient civilizations.”

Mendoza’s travels have mostly been planned around historic routes.

“For instance, I went the route of the three oldest continuously inhabited cities in the world: Jericho, when it was still part of Yasser Arafat’s Palestine, Byblos in Lebanon, and then Damascus in Syria.”

Once, in Libya, he found himself in the presence of none other than Muammar Gaddafi, a fairly surreal experience.

“Another journey took me to the places where Alexander the Great went—a good number are in conflict countries now like Erbil in Kurdistan, Taxila in Pakistan, Samarkand and Bukhara, and of course Persepolis in Iran.

“I went to the plains of Nineveh (in Iraq) which is in the Bible, then I went to Harran and Urfa in southern Turkey, which is the route that Abraham took in the Bible from Ur to Israel. That’s where the first temple is, which is 7,000 years old. These are the kinds of things we do.”

“Travel gives you an idea of what else you can do with your life,” says Rasco.