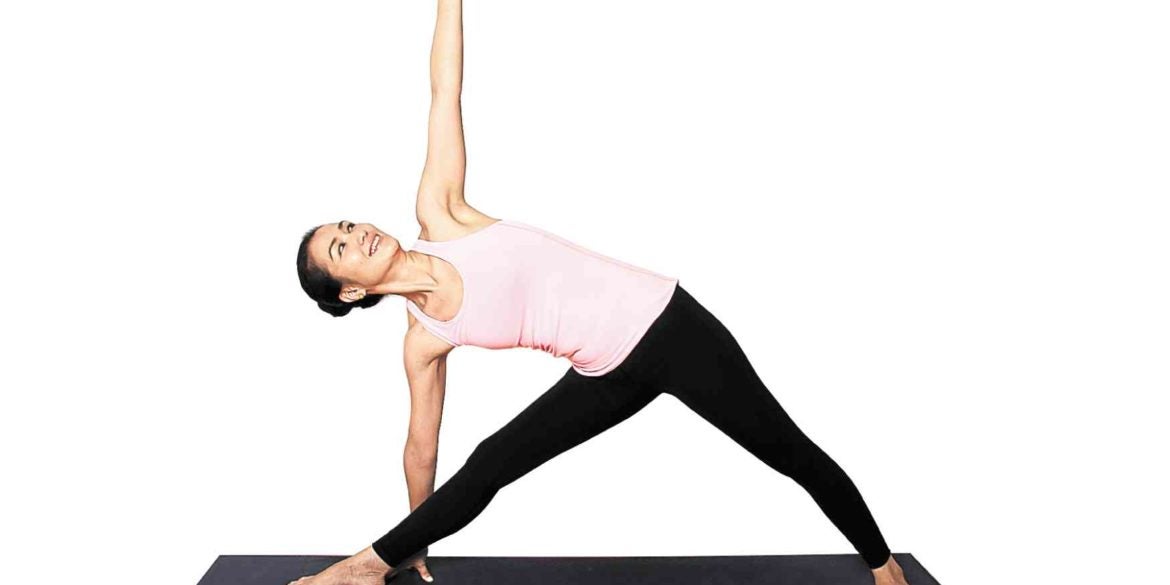 JPCox in a triangle pose. It improves circulation and stretches the hips, back, arms and legs.

Margie Duavit and Vicki Abary: Yogini sisters are stronger, fitter in their 40s

After years of yoga practice, they report stable hormonal levels, which are crucial for perimenopausal women

Eight years ago, entrepreneur and congressional spouse Margaret “Margie” Abary Duavit couldn’t get her arms past her knees in the bending exercises despite her regular gym workouts. But after consistent yoga practice, not only can her hands reach the floor in bending, she can also perform arm balances and inversions with ease.

Her sister, Victoria Marie “Vicki” Abary, also an entrepreneur, practices yoga to balance her life. “As you get older, you realize you need self-love. It means being able to wake up and say, ‘I’m going to yoga class because I know it’s good for me,’” she says.

Yoga has taught Abary not just to get into a pose, replete with joints and limbs perfectly lined up with each other, but also to get absorbed in the practice.

“There is so much busyness in this world that when I don’t do yoga, I feel the effects,” says Abary. “When I do yoga and the same stuff happens, I’m able to handle it better and say, ‘Okay, just let it go.’ To tame my monkey mind from overthinking is a benefit of yoga. You put into practice the mindfulness as you turn off your phone for 90 minutes, get on your mat and think about your poses and breathe.”

Duavit and Abary are pioneer students of Urban Ashram Yoga (UAY), whose teachers have been trained under the YogaWorks method.

Founded by the late Maty Ezraty, an Israeli émigré in America, YogaWorks is a fusion of Vinyasa with its slow, choreographed sequences of movements leading to a climactic pose, intense Ashtanga and Iyengar, a similarly intense style concentrated on alignment and precision.

The YogaWorks method was developed to provide safe training for the practitioner to get the maximum benefits. The classes start with foundation movements based on what students with no exercise background can execute. As students progress, they learn preparatory poses before getting into the challenging poses.

The method also encourages self-acceptance where the practitioner doesn’t feel bad about one’s limits. “It’s a journey to well-being. On Monday, your body will not be ready for that pose, but by Friday, your mind is clear and you can do it,” says Duavit.

At 48, Duavit was part of a study for her gym trainer’s masteral thesis on the effect of resistance training on hormonal changes affecting mood in perimenopausal women.

It measured the cortisol, testosterone, estrogen and progesterone levels of the subjects over three months. Most of the subjects reported high or fluctuating cortisol levels. Cortisols are hormones that regulate metabolism and response to stress.

Duavit’s results, on the other hand, showed that she had her most stable cortisol levels despite her busy schedule as congressional spouse (husband Jack Duavit is congressman of the first district of Rizal) and owner of Hydration Nation, a supplier of insulated water bottles. Her trainer attributes Duavit’s stable hormonal levels to yoga.

Abary claims to be more fit at 44 than when she was younger.

The sisters tested their strength when they took on a Lagree Workout, a robust workout on a resistance carriage that targets large muscle groups. Abary likens it to “Pilates on steroids.”

Despite the fact that they were in a class with twentysomethings, the sisters finished the workout with flying colors.

“After the second class, I had no downtime with pain because yoga had strengthened my muscles so that I was able to perform. We do the real work while the millennials are more interested in taking videos of themselves,” says Abary.

The sisters love the headstand among all the poses. It took years of preparatory poses to build strength in the upper body and core muscles, mastering hand placement and practicing against a wall for support.

“When you’re upside down, you feel the blood flow and the energy surging,” says Duavit. She also likes poses that open the hips, and the upward facing dog which elongates the spine and stretches the chest and abdomen. These are antidotes to slouching or sitting all day.

Yoga is also bonding time for the sisters. “We are always looking out for each other’s best interests,” says Duavit.

“We always enjoy talking about yoga, the challenges we face and its benefits,” adds Abary.

They credit their teacher, Johanna Paula “JP” Abinuman-Cox, for their development. Cox explains that the sequences of the postures, backed by knowledge of anatomy and movement principles, enable people to progress into more physically demanding poses.

“If you have no athletic or ballet background, it’s impossible for a normal person to get into those fantastic Instagrammable poses,” says Cox. “With intelligent sequencing of poses, deep back bends and arm balances become doable through consistent practice. Once the mechanics of a posture are firmly in place, the body will just get into it.”

Cox’s classes provide a total body workout, minimizing exercises that bear too much weight on the wrists, before reaching peak poses such as arm balances.

“The best part about practicing yoga is not just building strength and flexibility,” Cox says. “It’s about developing fearlessness. You create a narrative in your mind that makes the practice accessible. Margie and Vicky are open and willing to try new things.”

As UAY’s faculty director, Cox will be the first Philippine-based trainer who will lead a YogaWorks teacher training class with American trainor Jennie Cohen in February 2020.

Most of UAY’s teachers have been certified by the YogaWorks system. “A solid foundation is essential in teaching good classes,” says Cox. “The instructors have the same way of teaching classes that’s accessible to everyone, yet is challenging to advanced students. After coming regularly to these classes, you can practice yoga anywhere in the world. No teacher can say your body is a little mis-aligned because we all come from the same foundation.”—CONTRIBUTED