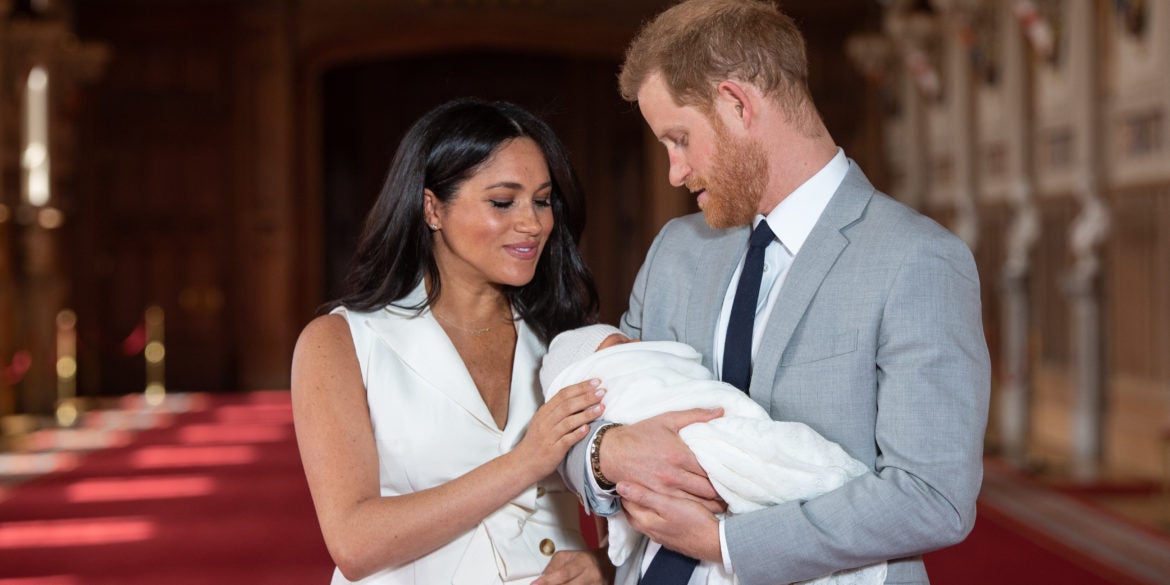 Britain's Prince Harry, Duke of Sussex (R), and his wife Meghan, Duchess of Sussex, pose for a photo with their newborn baby son, Archie Harrison Mountbatten-Windsor, in St George's Hall at Windsor Castle in Windsor, west of London on May 8, 2019. (Photo by Dominic Lipinski / POOL / AFP)

Britain’s Prince Harry, his wife Meghan and baby Archie are expected in South Africa on Monday to begin their first official tour as a family since their son’s birth in May.

The Duke and Duchess of Sussex will begin the 10-day trip in the coastal city of Cape Town — an international tourist destination where stunning beaches and rolling vineyards sit alongside some of the country’s most violent townships.

“Our family will be taking its first official tour of Africa, a region of the world that over the past two decades has been a second home to me,” said Harry on Instagram earlier this month.

“On a personal note, I can’t wait to introduce my wife and son to South Africa!”

Harry has travelled widely across Africa and jointly founded the charity Sentebale in 2006, to help support children affected by HIV, after spending a gap year in Lesotho.

Another Instagram post detailing the royal visit’s itinerary shows a picture of the smiling couple, followed by a photo of Harry’s late mother Princess Diana meeting landmine survivors in Angola in 1997.

Diana famously walked through a cleared minefield in Huambo, clad in a protective visor and vest to campaign for a worldwide ban on mines.

More than one million landmines were planted during Angola’s 27-year civil war, which started immediately after independence in 1975.

Diana was killed in a car accident shortly after her trip, when Harry was 12 and his brother William — now second in line of succession to the throne — was 15.

Harry, 35, will follow in his mother’s footsteps with a stop in Angola next week, when he is scheduled to visit another minefield in Huambo and remotely detonate a mine in the south of the country.

He will also travel to Botswana and Malawi to promote conservation work and HIV prevention projects.

Meanwhile, mother and baby will remain in South Africa, where the Duchess will undertake various activities to raise awareness about women’s rights.

The couple, who had a trip to Australia, New Zealand, Tonga and Fiji last year, have kept a low profile since the birth of their son.

After the first five months of his life were spent largely shielded from the public eye, baby Archie will become one of the youngest royals to take part in an official visit.

Prince William’s son George, 6, accompanied his parents to Australia and New Zealand when he was eight months old.

While cameras will be fixed on the royal family’s latest addition, Meghan may feel under pressure to avoid anything judged controversial by the British public.

Despite a fairytale wedding that conquered hearts last year, the former American-born actress has come under fire from some newspapers for her expensive tastes and dealings with staff.

British tabloids have lashed out at Meghan for her lavish baby shower in New York and for guest-editing an issue of British Vogue.

The cover — featuring 15 influential actresses, models, politicians and writers — was blasted by some for being “left-wing” and endorsing “divisive” causes.

And last year one of her personal assistants told the press she quit after the Duchess’ demands reduced her to tears, stoking another flurry of criticism.

The couple has also faced criticism for using a series of private jets to fly to France this summer, and for undertaking costly renovations on their Windsor Estate home.

Vogue reported this week that the family would be travelling to South Africa on a commercial flight — more in line with the Duke’s environmental advocacy.

‘We camped under the stars’

Harry and Meghan holidayed in Botswana together in 2016, only weeks after their first date.

The country and its national parks cemented their blossoming romance.

“I managed to persuade her to come and join me in Botswana. And we camped out with each other under the stars,” Harry told the BBC during an interview with the couple after their engagement.

“She came and joined me for five days out there, which was absolutely fantastic.”

Though they have since returned to Botswana as a couple, Meghan is not expected to accompany the Duke to Chobe National Park next week.

Tutu and his wife have described their meeting with the Duke and Duchess next week as a “rare privilege and honour”.

Cover image: Britain’s Prince Harry, Duke of Sussex (R), and his wife Meghan, Duchess of Sussex, pose for a photo with their newborn baby son, Archie Harrison Mountbatten-Windsor, in St George’s Hall at Windsor Castle in Windsor, west of London on May 8, 2019. (Photo by Dominic Lipinski / POOL / AFP)