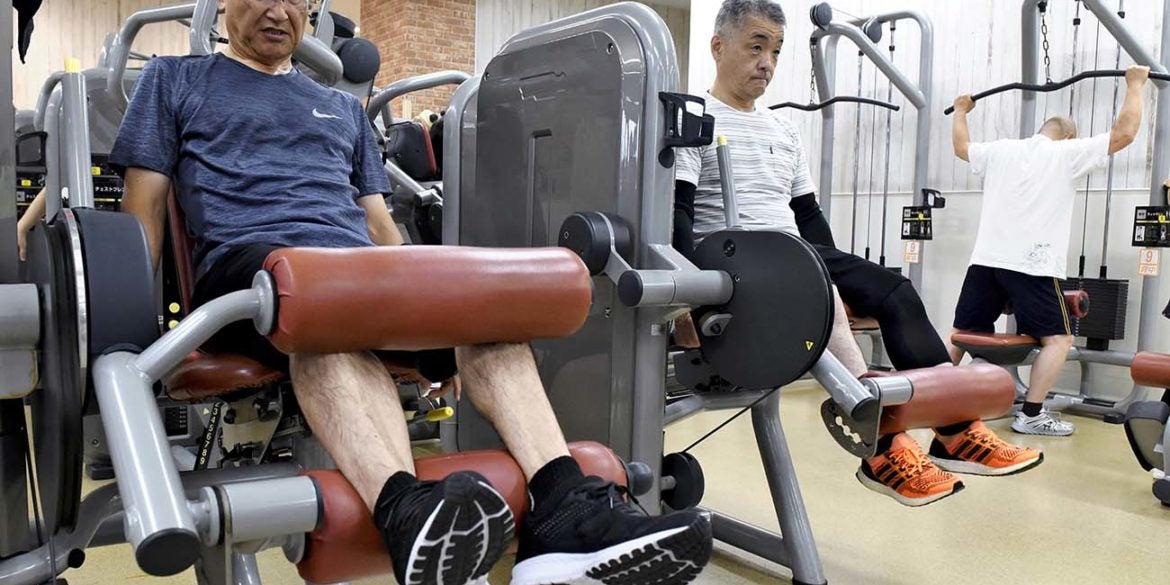 TOKYO — Fitness club Tipness in Katsushika Ward, Tokyo, was crowded with seniors one afternoon this month.

“[Coming here] helps to prevent my chronic ailments from getting worse. It’s also fun to chat with other members,” a 76-year-old said.

A company executive, 59, said he came here on his days off: “I want to keep working energetically even when I get old,” he said.

Tipness Ltd., which operates 55 gyms in the Kanto and Kansai regions, said 29 percent of its members as of the end of August are aged 60 or older, up seven percentage points from five years ago.

The company is trying to boost membership by offering programs for seniors that put less strain on the body.

According to a “Market Intelligence and Forecast” survey conducted by the Mitsubishi Research Institute Inc. in June, 15 percent of people in their 60s use sports facilities such as fitness clubs. Among 70 year olds, the figure is 18 percent, and 17 percent for those in their 80s.

The results also showed that the percentage of seniors using gyms was higher than other age groups.

The Fitness Industry Association of Japan has said the promotion of elderly health is one of the industry’s missions, and it has put importance on launching programs tailored for them.

In April, a study group of Liberal Democratic Party lawmakers on social security reform proposed income tax deductions on fees for health promotion facilities, such as fitness clubs, in an effort to encourage senior citizens to go to gyms.

The proposal may be considered by the government as Health, Labor and Welfare Minister Katsunobu Kato — who joined the Cabinet in the recent reshuffle after serving as chairman of the LDP General Council — was an adviser to the study group.

The government is willing to support senior citizens in their efforts to improve their health on the ground that it could help to curb medical and nursing care expenses if people live longer healthy lives.

If more seniors remain in the workforce for longer, thus continuing to make contributions to the pension pot, it will lead to an increase in individual pension payments and a stabilization of the pension system. The ministry is considering either easing or ending the system of reducing the pension paid to retirement-age workers who earn above a certain amount, to increase the willingness of seniors to continue working.