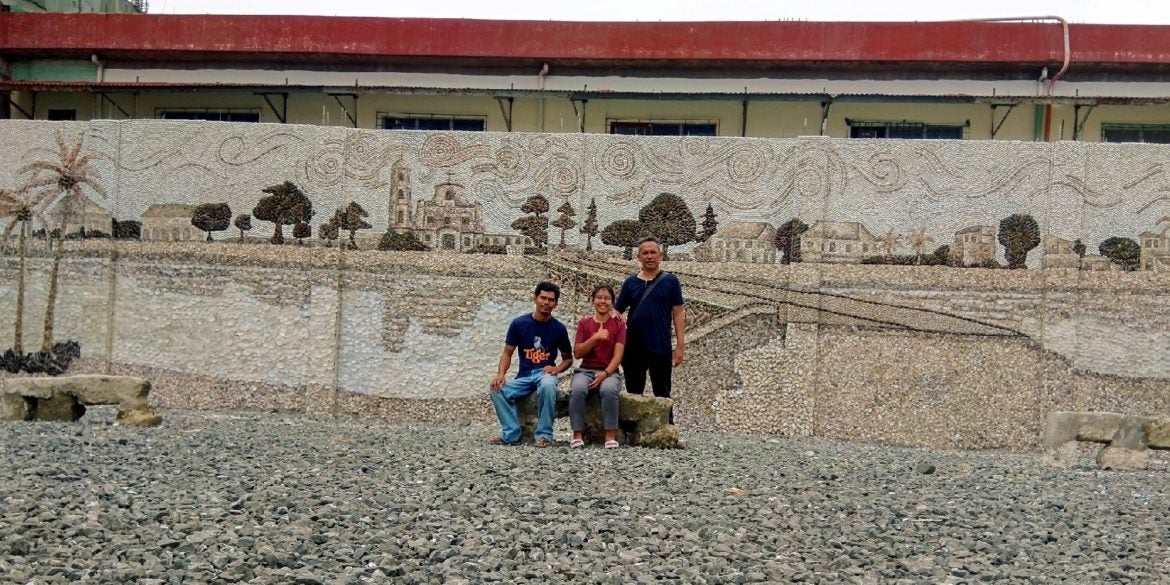 Lhee Taneo (center) poses with Danger Sanchez and Roxas City local artist Lloyd Develos. Taneo is the artist behind the shell mural shown at the Primero at the Planta event. PHOTO from Danger Sanchez

ROXAS CITY, Capiz, Philippines — When it comes to learning history, the generation of today would find the subject too boring or uninteresting.

The kids of today would rather educate themselves visually, rather than reading facts on books.

Cebu-raised artist Lhee Taneo is an artist who was able to educate today’s youth about history through an avenue in Roxas City, Capiz.

The artwork was a product of 50 bags of different shell varieties, ranging from “talaba,” “tahong” and “ilok-ilok,” among others.

The shell mosaic was paired with a colorful mural that showed various images, stretching 361 feet wide.

These two were the centerpieces at the Primero at the Planta event in the town, held last Sept. 20-22.

Taneo, 27, was part of Danger Sanchez’s 21-man team, who transformed the walls of the Primero site from being dull to vibrant.

Sanchez was the man who gave local artists their big break, thanks to a mural.

READ: Giving back: How one man gave Roxas City local artists their break through a colorful mural

According to Sanchez, it was the lot owner who requested another mural aside from the huge painting. The two initially planned to have a mural made out of bathroom tiles.

Later on, they both decided to go with shells instead.

Why a mural made of shells? Aside from Capiz being “the seafood capital” of the country, Sanchez said that it was the owner’s way of “giving back” to his hometown.

Coincidentally, “giving back” was also the concept the owner gave Sanchez and the artists for both murals.

So when the owner gave this assignment to Sanchez, he immediately thought of Taneo, who herself is known for producing artworks made of shells.

Sanchez added that Taneo’s participation in the project was also “the right timing.”

But when Taneo was told of how huge her work will be, she initially felt overwhelmed with it.

“I started working with large scale portraits, it was way back in 2013. But I have never worked with such a massive scale in terms of a ‘mural’” Taneo told INQUIRER.net in an online exchange Thursday.

“I have worked with murals before but never in mosaic on paintings, the largest [I did was around 3 meters by 6 meters,” she added.

Nevertheless, she added that she felt excited about the project too.

With Taneo agreeing to be part of the project, she wasted no time and immediately flew to Roxas City last Aug. 1.

Stepping in the town, Taneo shared that she initially thought the local artists who she will be working with, found her “intimidating.”

“I went to Capiz really overwhelmed. [I thought they were] typical Probinsyanos (provincial people) who automatically feel intimidated by the idea of imperial Manila stigma,” she shared.

But once she got to work with them, Taneo said her perspective had changed.

“When we started working together, I was shocked to realize how everyone was super humble and welcoming,” Taneo went on to say.

The artists too also helped Taneo with collecting the shells, which she said most of it were bought from vendors in the local Baybay beach.

“Most of the shells we used came after we went on the spot to check out other available shells na pwede magamit, kasi nung dumating  ako,  talaba lang ang meron,” Taneo shared.

(Most of the shells we used came after we went on the spot to check out other available shells that we can use, because when I arrived, “talaba” was the only one available.)

“Yung iba din dun (some shells too) we picked from Baybay beach along the way back to the site after buying from local shell merchants,” she shared.

Taneo revealed that while she was in Capiz for the shell mural, she missed the opening of an exhibit back in Makati City, which she was a part of.

Still, Taneo chose to focus on finishing the mural, which took a total of 22 days to complete.

And although she was not present at the three-day event itself as she was back home in Cebu, Taneo expressed happiness when she was told that many of the Roxas City residents were delighted with her work.

In fact, she said that she not only impressed the residents but herself as well.

“I always have self-doubt, not just as an artist but as a person in general, I always feel intimidated with everything and I have this weird anxiety of crying when [I’m] asked to express my thoughts verbally,” she said.

And after finishing the mural, this was her realization: “If I was able to pull off conquering such a massive wall, then I now have grounds para i-reconsider ang self-doubts ko next time and i-cheer up sarii ko na kakayanin ko.”

(If I was able to pull off conquering such a massive wall, then I now have grounds para i-reconsider my self-doubts next time, also to cheer up myself that I can do it too.)