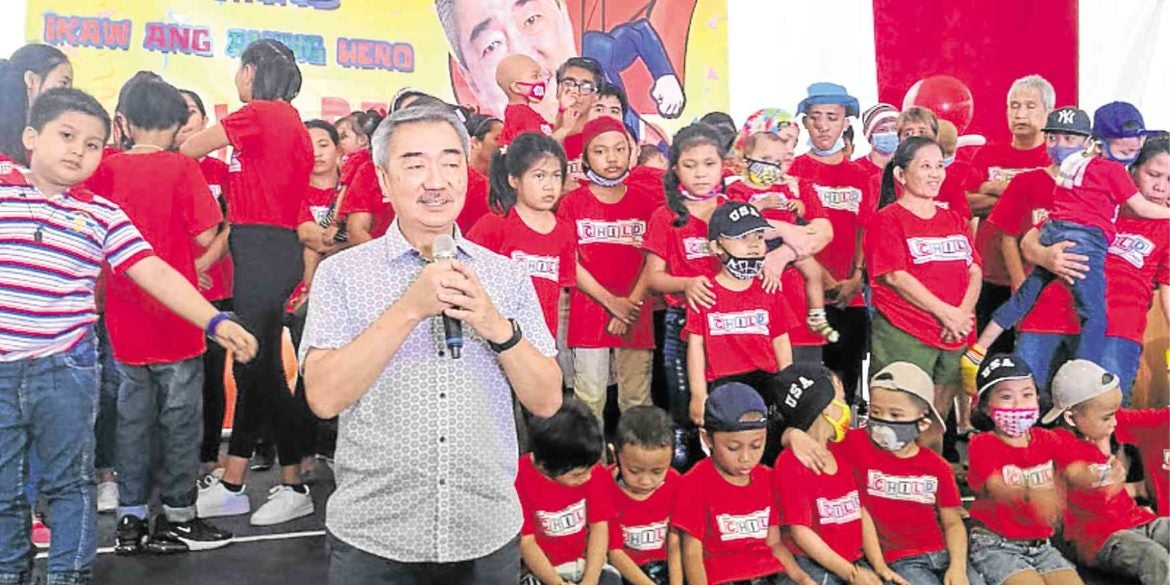 ‘It gives me inner happiness,’ says the SM Prime Holdings director who celebrates his birthday at Child Haus, which he built 4 years ago as a halfway home for kids and adults awaiting medical treatment

At 64, Hans Sy has just about everything in life—a happy family, good health and enormous wealth. This year, Hans, together with his five siblings, Teresita, Elizabeth, Henry Jr., Herbert and Harley, made it to the top of Forbes magazine’s list of the Philippines’ richest people—a post held for the past 11 years by his father, SM Group founder Henry Sy, who died on Jan. 19.

But something that Hans considers heartwarming and priceless is helping children with afflictions and spending time with them.

“It gives me inner happiness,” he told Inquirer Lifestyle while celebrating his birthday recently at Child Haus, a halfway house for kids and adults suffering from cancer.

Child Haus, a seven-story building in Paco, Manila, with complete facilities to assist and care for cancer patients from all over the country awaiting medical evaluation and treatment at the Philippine General Hospital (PGH), was built in 2015 from Hans’ own money.

Hans, who arrived with his wife Carol to join the celebration that has become an annual event hosted by Child Haus founder Ricky Reyes, recalled being moved to action after catching Ricky crying on TV.

In 2011, he was watching the news and saw Ricky pleading to the government to stop an eviction order against Child Haus, which was then sharing space at the Philippine Charity Sweepstakes Office compound in Quezon City.

The idea to set up Child Haus took off 15 years ago, soon after then Inquirer editor in chief Letty Jimenez-Magsanoc took Ricky to the Cancer Institute of PGH to help female cancer patients. Ricky saw young patients and their families sleeping on the hospital corridors and the yard because they had no place to stay.

Hans recounted that he asked Ricky about the eviction notice: “I said the children didn’t deserve to be involved in those issues. They don’t even understand why they’re sick. The first thing I did was buy them a house in Quezon City.”

After a couple of years, Hans said he saw that the kids were doing fine, but he wanted to do more: “So, on my 60th birthday in 2015, I decided to build this (Child Haus’s own building on Agoncillo St.).

The program began with a Mass held under a tent across the Child Haus building. About a hundred children with their parents sat in the center, with Hans, Ricky and Child Haus donors and supporters at the sidelines.

After the priest gave his blessings and sprinkled holy water on everyone, Ricky took the mic and started thanking special guests, especially the ones “na mabilis pumirma ng cheke para mag-donate sa amin.”

He explained that Child Haus operates on an average budget of P20 million every year from donations. But the best thing about it is, each time they needed more funds, the money would come.

Child Haus has opened its doors to thousands of cancer patients, and has even helped those with different ailments.

For Hans’ birthday party, other kids with various afflictions were invited.

He dreams of becoming a chef and wants to finish college for his parents.

Patricia Siaboc, 13, has been suffering from bone disease since she was 1 and a half years old. She’s been undergoing chemotherapy, which she said is masakit. She attends a school at PGH called Silahis ng Kalusugan.

Like John, she said she finds hope in her family and God.

Moments after all the kids went onstage to perform a musical number for Hans, the guest of honor was silent for a moment: “I’m … speechless. I’m so happy.”

Like a child, Hans looked bashful but his eyes twinkled with delight.