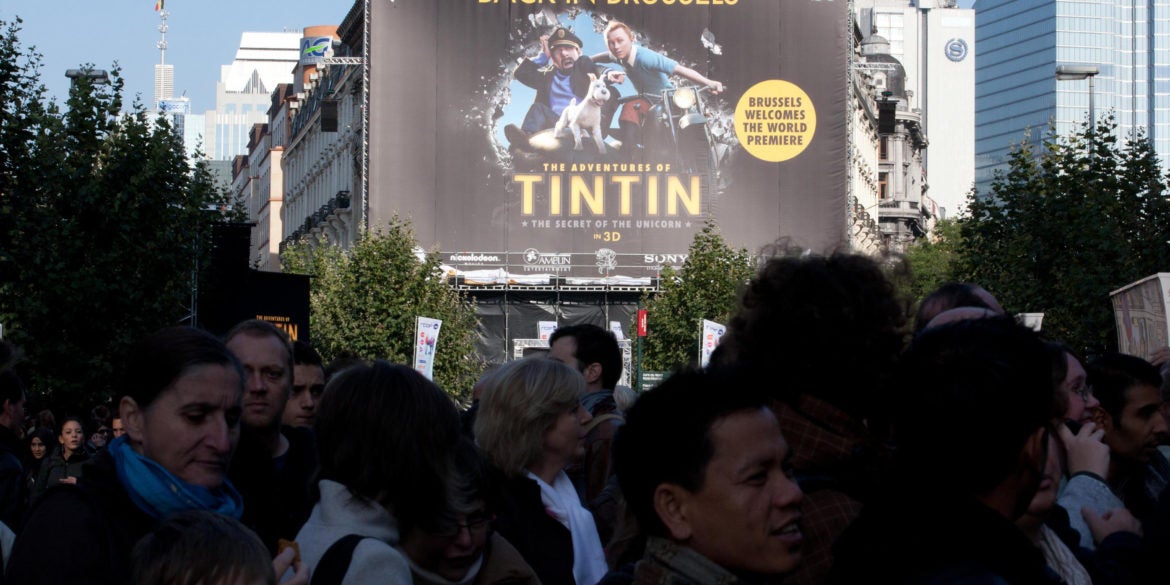 The public queue up for the world premiere of the film 'The Adventures of Tintin: The Secret of the Unicorn' (Les Aventures de Tintin: Le Secret de la Licorne) at UGC cinema at the Brouckere square in Brussels, on October 22, 2011. Belgium rolled out the red carpet Saturday for Tintin, its most celebrated son, as Steven Spielberg premiered his blockbuster-to-be to enthusiastic crowds in the comic book hero's home city. "It is a great honour for us to bring Tintin home," Spielberg told at news conference. "It was important to me. Brussels is his birthplace. Tintin is coming back." AFP PHOTO / BELGA / JULIEN WARNAND ***BELGIUM OUT*** (Photo by JULIEN WARNAND / BELGA / AFP)

It’s the moment experts say that Tintin stopped being quite so racist, and began his long journey towards what we might now call culturally sensitive “wokeness.”

A key drawing of the crime-fighting cub reporter from his British adventure, “The Black Island,” will go under the hammer in Paris next month.

Worth an estimated 300,000 euros ($326,000), the A3-sized ink drawing from 1938 marks a turning pointing in the development of the comic book boy hero as a more rounded, self-aware individual.

Having engaged in full-blooded Russophobia in “Tintin in the Land of the Soviets”, and piled on the racial stereotypes in subsequent scrapes in the Congo, America and the Middle East, Tintinologists say the story marks a “stylistic and ideological change.”

And they credit Tintin putting on a skirt — or a Scottish kilt, to be more precise — for this radical transformation.

Professor Laurence Grove of the University of Glasgow told AFP that in the story Tintin “goes from looking at other cultures from the outside to taking on other cultures.”

“He’s not saying, ‘I’m going to tell you what to do,’ as he did he in the Congo where he wanted to turn the natives into good little Belgians.

“This time Tintin is saying ‘I’m going to be like you and by doing that I’m going to help solve the problem,'” said the specialist, the president of the International Bande Dessinee Society, the French name for comics.

Loosely based on Alfred Hitchcock’s classic film, “39 Steps”, the story has Tintin and his dog Snowy pursuing a gang of counterfeiters across Britain, ending up in the Scottish Highlands where a “ferocious beast” kills anyone who dares to set foot on its island.

The scene being auctioned in Paris on October 11 shows Tintin confronting the giant gorilla, which was the cover of Le Petit Vingtieme, in February 1938, the children’s magazine Herge’s edited for the Belgian Le Soir newspaper.

Grove said the story was “the only one that Herge redid twice”, sending his assistant Bob De Moor to Scotland on a research trip before work began on the final version in 1966.

He clearly did his homework. For as the Scottish newspaper the Sunday Post later noted, “Tintin had the legs for a kilt, enjoyed a pint, and had a fierce wee dog.

“If he didn’t have a Scots granny, he should have had,” it added.

The Paris sale also includes a preparatory drawing for the 1967 story, “Flight 714 to Sydney”, and the cover of “The Shooting Star,” produced during the German Occupation of Belgium — both of which comics expert Hugo Frey has said contained anti-Semitic tropes.

Grove said “The Shooting Star” was “overtly pro-Nazi, and the story is really the Axis against the Allies,” with the baddie Blumenstein a stereotypical Jewish capitalist.

Herge made significant changes to the story after World War II, including reducing the size of Blumenstein’s nose.

The flight to Sydney drawings, which feature his sidekick Captain Haddock and friend Professor Calculus, are likely to go for up to 100,000 euros, with the explosive mushroom scene cover from “The Shooting Star” fetching a little less.

Four images which show members of Tintin’s gang — including Thomson and Thompson — bumping into each other is expected to make 20,000 euros.

They are going under the hammer alongside works by “Asterix” creator Uderzo and the Italian graphic novelist Hugo Pratt, the creator of the “Corto Maltese” stories.