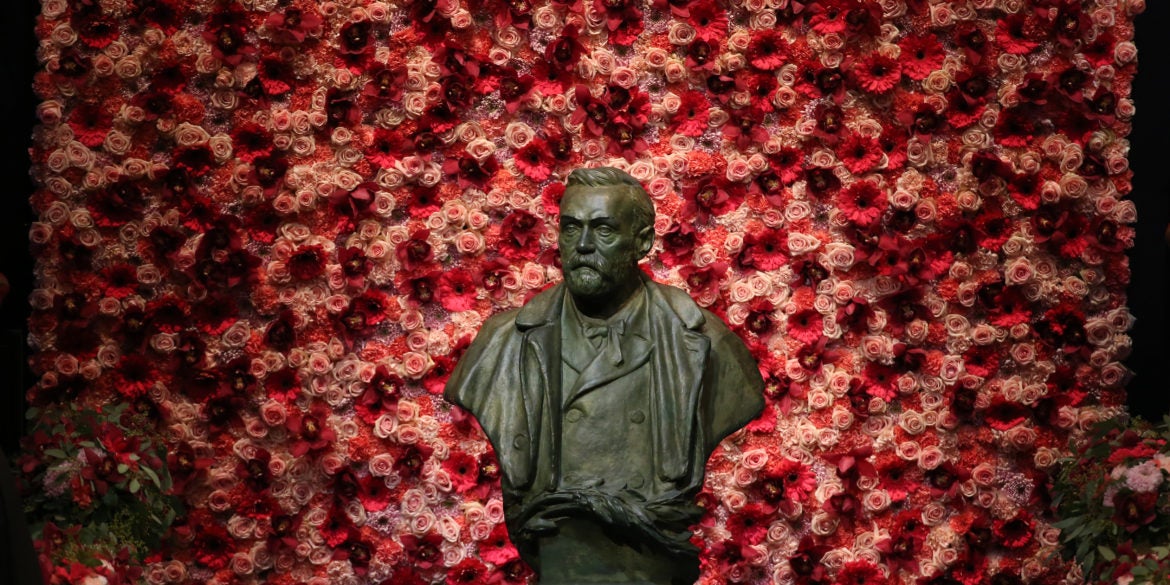 (FILES) In this file photo taken on December 10, 2016 A bust of Alfred Nobel is pictured prior to the awardings of the Nobel Prizes in medicine, economics, physics and chemistry in Stockholm, Sweden. - Nobel laureates are honoured every year on December 10 -- the anniversary of the death of prize's founder Alfred Nobel, a Swedish industrialist, inventor and philanthropist. (Photo by Soren Andersson / AFP)

Five things to know about the Nobel prizes

Since 1901, the Nobel prizes have been awarded to men, women and organisations whose work has led to great advances for mankind, in line with the wishes of Alfred Nobel.

Here are five things to know about the prizes and their creator.

Nobel went down in history as the inventor of dynamite, but he was also keen on English poetry and a fan of Shelley and Byron.

He wrote poetry his entire life, sometimes in his native Swedish but mostly in the Bard’s language.

In a letter to a friend, he wrote: “I have not the slightest pretension to call my verses poetry; I write now and then for no other purpose than to relieve depression, or to improve my English.”

In 1862, at the age of 29 and questioning his literary talent, he sent a letter to a young woman that said in French: “Physics is my field, not writing.”

The year of his death, 1896, he wrote a scandalous tragedy in four acts entitled “Nemesis”, inspired by Shelley’s play “The Cenci” about a woman in 16th-century Rome who murders her incestuous father.

Since the Nobel prizes were first awarded, six children have followed in the footsteps of their parents, becoming Nobel laureates themselves.

The Curie family alone clocked up a grand total of five awards, as each individual winner receives a prize.

Two went to Marie Curie, who first won the physics prize in 1903 with her husband Pierre and Henri Becquerel, and then the chemistry distinction in 1911.

Irene, her eldest child, was awarded the chemistry Nobel with her husband Pierre Joliot in 1935.

Since 1901, five Nobel peace laureates have been unable to attend the prize ceremony in Oslo:

In 1936, German journalist and pacifist Carl Von Ossietzky was detained in a Nazi concentration camp.

In 2010, Chinese dissident Liu Xiaobo was in prison. His chair remained empty, where the prize was placed.

In 1975, Russian dissident Andrei Sakharov was represented by his wife Yelena Bonner.

In 1983, Polish union leader Lech Walesa declined the invitation to come to Oslo for fear he would not be allowed back into Poland.

Myanmar opposition leader Aung San Suu Kyi was under house arrest when she won the prize in 1991. Given permission by the junta to travel, she declined for the same reason as Walesa.

Why is there no Nobel prize for mathematics?

In the 1980s, researchers were able to put to rest longstanding rumours that Alfred Nobel’s lover had had an affair with mathematician Gosta Mittag-Leffler. There’s nothing to support the rumour, and everything suggests otherwise.

So why is there no prize? There are two likely explanations.

In 1895, when Nobel wrote his will, a maths prize already existed in Sweden and he saw no need for a second one.

And at the beginning of the 20th century, the applied sciences were in public and scientific favour. The contribution of mathematics to humanity was not as obvious as it is today.

The statutes of the Nobel Foundation stipulate since 1974 that the award may not be given posthumously: but a person may be awarded the honour if she or he dies between the time of the announcement in October and the formal prize ceremony in December.

Before the change, only two people had won a Nobel posthumously.

One was Dag Hammarskjold, the Swedish secretary general of the United Nations who died in a plane crash in 1961 but was awarded the Nobel Peace Prize later the same year.

And in 1931, the Nobel prize for literature was awarded posthumously to another Swede, Erik Axel Karlfeldt.

In 2011, the medicine prize committee honoured Ralph Steinman of Canada, unaware that he had passed away just three days before its announcement.

The foundation decided nevertheless to give him the prize.

Cover image: A bust of Alfred Nobel is pictured prior to the awardings of the Nobel Prizes in medicine, economics, physics and chemistry in Stockholm, Sweden. Nobel laureates are honoured every year on December 10 — the anniversary of the death of prize’s founder Alfred Nobel, a Swedish industrialist, inventor and philanthropist. (Photo by Soren Andersson / AFP)