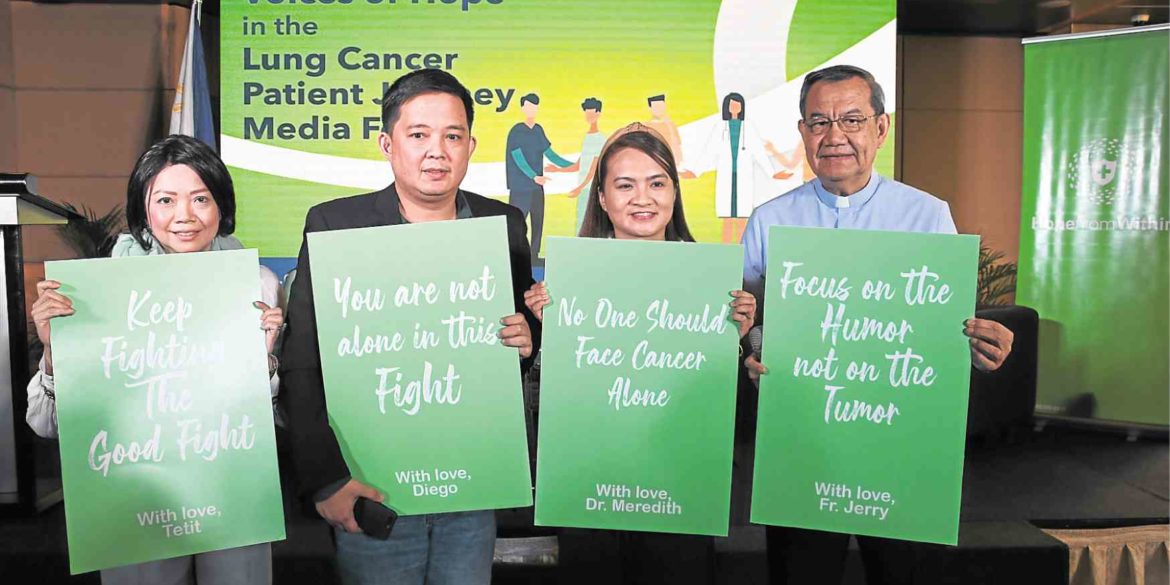 Don’t rely on Google; know symptoms of lung cancer—recurring infections, among them

It’s often detected at its later stages, but regular screening can decrease mortality by 20%

Tetit Melendres-Aristan follows a healthy lifestyle. She goes to the gym, has no vices and watches what she eats.

So when she was diagnosed with Stage 4 lung cancer last September, the news stunned everyone around her.

Aristan recalled how her symptoms started—a cough that wouldn’t go away, which she quickly dismissed as seasonal allergic rhinitis. When her cocktail of meds didn’t work, her EENT referred her to a pulmonologist, who diagnosed her with asthma. A third opinion finally gave the correct diagnosis.

Aristan, with Inquirer columnist and Stage 2 lung cancer survivor Fr. Jerry Orbos, was guest in this year’s “Voices of Hope: Winning vs Lung Cancer,” an initiative of Hope From Within, an advocacy that promotes lung cancer awareness, better access to new treatment options, and hope for survival.

“One problem in lung cancer is that most of the time, it has an insidious onset,” said Dr. Meredith Garcia, an oncologist. “Most commonly, we find patients in the later stages. That’s why it’s very important for people to know the symptoms, so that the earliest that one experiences these symptoms, the patient will already consult a doctor.”

Lung cancer is now tied with breast cancer as the most commonly diagnosed cancers in the world, according to the World Health Organization. Lung cancer, however, is deadlier, responsible for 18.4 percent of all cancer deaths worldwide.

“Sometimes [it creates a] false reassurance that they are getting better, only to find out later that cancer has spread. And then that’s when they come to the medical oncologist when it’s very difficult to treat already,” Garcia said.

“That’s why it’s important to get also screened because lung cancer is asymptomatic. And, please, don’t rely on Dr. Google,” Garcia said. “Through screening, we’re able to catch the disease at a very early stage in which it can still be cured.”

Regular screening specific for lung cancer decreases the mortality of patients by about 20 percent, she said.

Father Orbos, who admitted smoking early on in his calling, was diagnosed in February last year.

“The joy of the Lord is my strength. If you are joyful, the healing is faster,” Orbos said. “You have to hope, and you have to trust. I thank God I had cancer. It’s a blessing. It cleansed me a lot and made me humble,”

Hope From Within aims to increase access to the novel treatment options for lung cancer, such as immunotherapy and targeted therapy. It addresses key concerns of the lung cancer patients’ journey. With the introduction of new ambassadors, it aims to lessen the burden of the cancer disease, renew hope and save more lives.