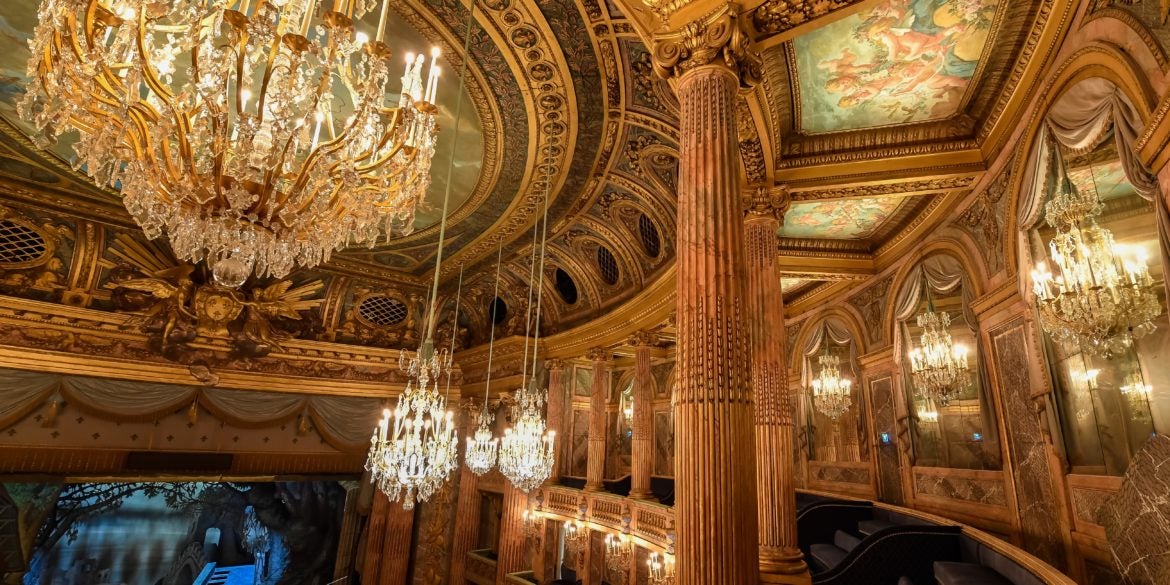 This photograph taken on October 2, 2019 shows the Royal Opera of the Chateau de Versailles, west of Paris. - On October 10, 2019, at the Royal Opera House, "Richard Lionheart", a famous opera by André Grétry, Marie-Antoinette's favourite composer alongside Gluck will be performed. It also heralds a 'small revolution' for Versailles and will be its first "in-house production" since 1789. In the hall, an architectural jewel that will celebrate its 250th anniversary in 2020 on stage, behind the scenes, among costume designers, the final touches are being put to the production of this opera which had been forgotten. (Photo by BERTRAND GUAY / AFP)

The last time the strains of the aria “Oh Richard! Oh my king!” echoed around the Opera Royal at Versailles it was for Louis XVI and Marie-Antoinette just before they were dragged off to Paris and their doom by their revolting subjects.

The piece from “Richard the Lionheart” by Andre Gretry, one of the tragic queen’s favorite composers, was last performed by the Palace of Versailles’ own opera company in 1789, as the ancient regime crumbled.

This week it returned to the gilded chocolate-box opera, commissioned by the Sun King Louis XIV, after a 230-year break.

The lavishly decorated theatre was used less than 20 times — most famously for the festivities that followed Marie-Antoinette’s marriage when she was just 14 — before she and her husband lost their heads in the French Revolution.

And it was the singing of the aria by the king’s bodyguards when the royal couple appeared at a banquet at the opera on October 1, 1789 that lead to their downfall, Versailles’ theatre and events director Laurent Brunner told AFP.

Such a defiant display of royalist sentiment three months after the fall of Bastille incensed the hungry people of Paris, whose women marched out a few days later to take the royals back to the capital.

“It caused a scandal in revolutionary Paris,” said Brunner, with radical leaders like Marat and Danton branding the banquet “counter-revolutionary”.

Rumors circulated “that the revolutionary tricolor rosette has been trampled underfoot” by the royalist revellers, he added.

“Three days after (the news broke), the women of Paris marched on Versailles and the day after the palace was empty,” Brunner added.

By then the three-minute song about Richard the Lionheart, the English king who had also been taken hostage while he was returning from the Crusades, had become a royalist anthem.

It was quickly banned by the revolutionary government.

Even before the monarchy fell, the comic opera had never been fully performed on the Versailles stage — which was formally inaugurated on Marie-Antoinette’s wedding day as a gift to the opera-loving teenager.

She later built her own little theatre, the Trianon, in the grounds of the palace where she would put on amateur dramatics starring herself and her friends, and stage concerts by her favorite composers like Gretry and Gluck.

Having hardly hosted another opera from the revolution right up until its restoration in 2009, the theatre is something of an 18th-century time capsule, with machinery to match.

Its design may have been revolutionary in its time — allowing for the stalls to be removed for balls and banquets — but today it takes  brawn as well as brains to operate.

Six levels above the stage, Carlos Casado hauls the backdrops up and down by hand, one of the last machinists in France to do so.

“It is quite tough physically,” he admitted. “It is like working at theatre’s very beginnings.

“The movements need to be very quick, and a lot depends on ‘feeling’ so it all goes with the music,” he added.

Even though “Richard the Lionheart” is a story from the Middle Ages, American director Marshall Pynkoski has set the new production in Versailles’ 18th-century heyday.

“There is a real emotion about working here at Versailles,” said Camille Assaf, the wardrobe mistress. “The atmosphere gets deeply into you,” she told AFP.

She reproduced costumes “by looking at an awful lot at paintings by Watteau, Fragonard and Boucher” to catch “the very particular grace” of the period.

The next production at the Opera Royal will be another nod to the palace’s rich history — “The Ghosts of Versailles,” which was created by the New York Metropolitan Opera nearly 40 years ago.

In it Beaumarchais — the author of “The Marriage of Figaro” — tries to change the course of history so that Marie-Antoinette keeps her head and never has to face “Madame Guillotine.”

Cover image: The Royal Opera of the Chateau de Versailles, west of Paris. On October 10, 2019, at the Royal Opera House, “Richard Lionheart”, a famous opera by André Grétry, Marie-Antoinette’s favourite composer alongside Gluck will be performed. It also heralds a ‘small revolution’ for Versailles and will be its first “in-house production” since 1789. In the hall, an architectural jewel that will celebrate its 250th anniversary in 2020 on stage, behind the scenes, among costume designers, the final touches are being put to the production of this opera which had been forgotten. (Photo by BERTRAND GUAY / AFP)