Why even Khloe Kardashian supports this mompreneur | Inquirer Lifestyle 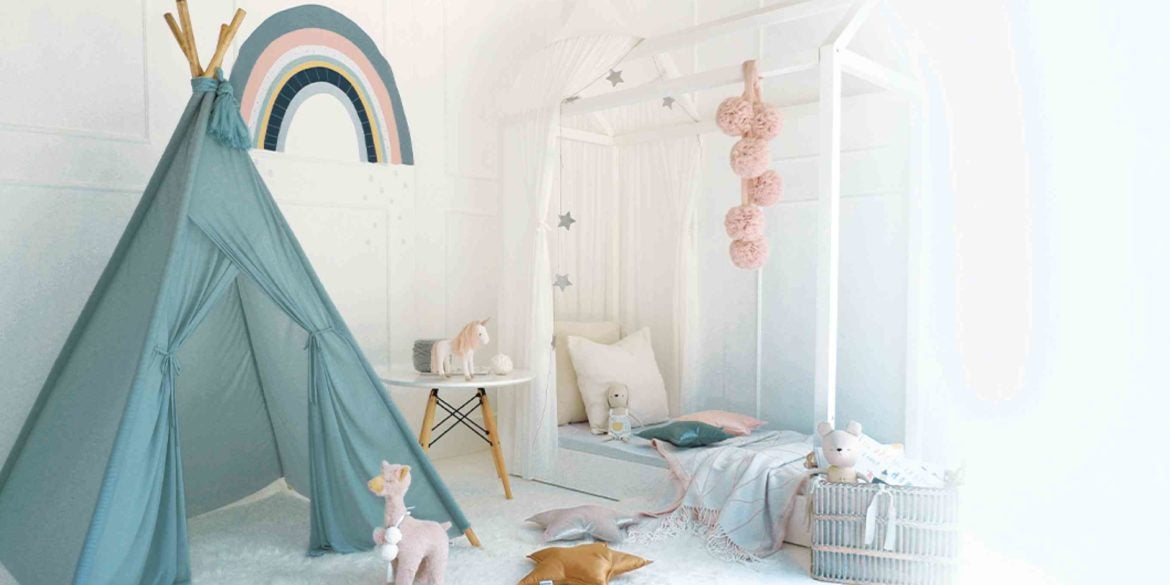 Give the toddler a private space for play with this tepee. Room is decked with pom-poms and stuffed animals.

Why even Khloe Kardashian supports this mompreneur

Ex-corporate executive Mutya Buensuceso answers the need of millennial moms for a creative, intimate space for their children

A mother from the southern United States waxed enthusiastic about a Philippine-made, pink tulle canopy which she used as  focal point in her daughter’s room. The room was featured in Modern Texas Living, a lifestyle magazine.

Mother and blogger Candace Paterra described how she furnished the pink room with a crocheted area rug, cushions, dolls, floral decals and artwork.

“I needed that essential piece that would transform the room and bring softness, texture and color into the space,” wrote Paterra. “I fell in love with the Spinkie canopies, especially the Dreamy Canopy.”

She gushed over its ethereal quality and the silky softness of tulle that lent a luxurious feeling.

Paterra is a typical user of Spinkie, an infant and children’s décor and fashion company founded by a mompreneur.  The product portfolio consists of canopies, tepees, soft toys, pom-poms, garlands, pillows, blankets and stylized tutus for little girls.

“I’ve always envisioned Spinkie as a global brand, designed in the Philippines but serving the world,” says Mutya Buensuceso, founder and creative director of Spinkie.

The Dreamy Canopy, Spinkie’s signature product, is known for its ornamental crown with flowing drapes. It adds intimacy to a space.

Observing the social media feeds of mothers in Australia and Scandinavia, Buensuceso noted that more millennial mothers enjoyed decorating their nurseries and children’s rooms and sharing their work.

“I asked myself, ‘How could I be a part of their process in creating a very important space—the children’s room?’ This is where they sleep, study and play. I want to enable moms to produce a space where the colors, details and the total look stimulate creativity and curiosity. These play a role in a child’s development,” she tells Lifestyle.

In 2016, Buensuceso assembled Spinkie’s now flagship product, the canopy, and crafted accessories such as pom-poms, hanging puffs and garlands. She decorated her children’s rooms and hallways with these elements and posted the photos on Instagram. Soon she started getting orders from abroad.

Spinkie’s vision is to produce children’s products sewn by local mothers and sold by mothers.

“Our philosophy is to provide livelihood for mothers,” says Buensuceso. The toys, décor and clothing are outsourced to workshops in the Philippines. Spinkie’s fabrics are customized in China, which has the capacity to produce large volumes.

Following its launch on social media, Spinkie had its first international stockist from Australia.

After two years, Spinkie now has over 64 stockists in 22 countries from Australia, the US and Scandinavia. These mothers want to work at home so they can look after their children. They opened online stores. The more successful ones have built brick-and-mortar stores.

The business has been experiencing quantum growth as Spinkie has become a popular site for children’s décor.

Buensuceso says 98 percent of the business is derived from the overseas market. “We are getting known for our tagline, ‘Creating magical spaces with you,’” says Buensuceso.

The canopy has been the most sought-after product, especially by celebrities. Reality TV star  Khloe Kardashian discovered Spinkie through IG trends. Kardashian’s assistant ordered the canopy and pom-poms for baby girl True.

Then pregnant Australian TV actress Lauren Brant, a former member of the musical group Hi-5, contacted Buensuceso on IG to buy a canopy.

Ever since Spinkie’s canopies have been visible on IG, it has set a trend in children’s décor. The style has been knocked off by other companies.

As an alternative to plastics, the soft toys such as unicorns, animals, rabbits and dolls in tutus are safer. Children learn social skills such as bonding and affection, because the toys provide security when hugged.  Mothers loved the dolls with tutus, such that they started requesting tutu-styled dresses for their daughters.

Buensuceso ventured in infants’ products  in 2011 when she was on maternity leave. Back then, she and her husband, sculptor Jinggoy Buensuceso, were based in Singapore, where she was posted as global brand director of a multinational personal care company.

While waiting in the obstetrician’s office, she noticed an infant on a stroller. The latter kept bobbing despite the fact that her head was supported by a U-shaped pillow.

Buensuceso had a light bulb moment. She started researching on orthopedic pillows. On the internet, she came across an American mother who specialized in pillows. They worked together to develop the butterfly-shaped pillow that secured the baby’s head and neck. Spinkie was launched in boutiques in Singapore.

With her creative juices on overdrive, Buensuceso went on to hand-sew hair accessories for children. When orders for the hair bands amounted to 500 pieces, Buensuceso stayed up late, alternating between sewing and breastfeeding her first-born, Mayumi.

The family moved to the Philippines, where Buensuceso was active in Mommy Mundo, an online community for mothers. It became her platform for Spinkie’s butterfly pillows and hair products.

Buensuceso returned to corporate life as country manager of a global cosmetics company  to help her husband build their home in Alfonso, Cavite. Meanwhile, Spinkie continued through her team of sewers, a local distributor and e-commerce.

With her 20 years of experience in marketing and brand building, she noticed that there was huge business potential among millennial mothers. Three years ago, she decided to leave the corporate world and become more hands-on with Spinkie.

Her two children, Mayumi and Malaya, were growing up and needed her attention. As a creative person, she wanted to develop new products for infants and tiny tots.

On Oct. 19, Spinkie will be launched in the local market at Green Sun Hotel in Makati. It will have a pop-up store, bedroom vignettes and a styled photo booth for children.

Buensuceso hopes to open a brick-and-mortar store for customers to experience the brand.  “It will complete the omni-channel strategy,” she says. —CONTRIBUTED