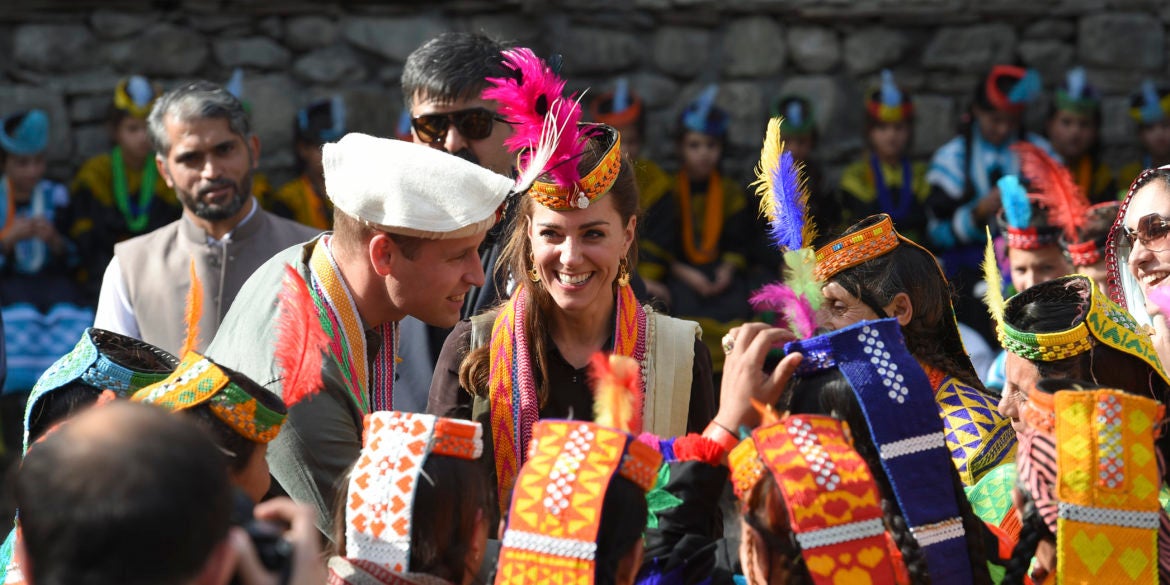 Britain's Prince William (2L), Duke of Cambridge and his wife Catherine (C), Duchess of Cambridge, talk with member of the Kalash tribe during their visit to the Bumburate Valley in Pakistan northern Chitral District on October 16, 2019. - Prince William and his wife Kate flew near the Afghan border to visit a remote Hindu Kush glacier on October 16, after a morning spent trying on feathered traditional caps and luxurious shawls in Pakistan's mountainous north. (Photo by FAROOQ NAEEM / AFP)

By: Farooq Naeem and Muhammad Daud

Wearing traditional headgear and clapping to music, Britain’s Prince William and his wife Kate met a tiny animist tribe in northern Pakistan on Wednesday, after flying by helicopter to a remote Hindu Kush glacier near the Afghan border.

The Duke and Duchess of Cambridge spent the afternoon witnessing the effects of climate change on the Kalash, Pakistan’s smallest religious minority — an ancient, polytheistic tribe who live in three valleys.

Believed to be descended from Alexander the Great, they worship their gods with music and dance.

Men and women mingle freely, and women can choose their husbands but also move on to new loves, setting them apart from much of patriarchal Pakistan.

But their way of life they have practiced for centuries is under threat, both by global warming and the gradual absorption of their people into Islam.

Before visiting the Kalash, the royal couple travelled by helicopter to a melting glacier in Broghil Valley National Park, near the border with Afghanistan.

They walked around the northern tip of the glacier and saw how far it has retreated in recent years, a statement from Kensington Palace said.

Pakistan’s north is one of the most glaciated regions in the world, and experts say its vast, hoary rivers of ice serve as a water store for 250 million people.

But rising temperatures have alarmed residents who watch helplessly as the glaciers melt so quickly that they have unleashed devastating floods.

In Chitral district — where the Kalash live — floods in 2015 left thousands of families camping in the open just as the cold winter approached.

The couple met with environmental experts to discuss the melting, and later spoke with residents who have suffered in the floods.

Emergency response teams demonstrated first aid and a river crossing, then posed for selfies with William and Kate.

The Duke of Cambridge called the glacial melt an “impending catastrophe” in a speech delivered at a glittering reception in Islamabad late Tuesday.

Earlier Wednesday, during a refuelling stop on the way to the glacier, the Duke and Duchess tried on a Chitrali cap given a touch of luxury with a peacock feather, which local media said was a gift to them from residents.

The flat, woollen hats, also known as “pakols”, are popular in northern Pakistan and throughout Afghanistan, though feather decorations are usually reserved for special occasions.

They also tried on chapans, long bulky embroidered coats popular in Central Asia; as well as a lush woollen shawl for Kate, who snapped her own share of pictures during the trip.

The verdant, plunging valleys of Chitral have long attracted tourists for their natural beauty and their brush with legend as the home of the Kalash.

But the diminishing tribe — who now number only around 3,000 people — fear that their unique culture will not endure.

Not only are their young people increasingly converting to Islam, but the modern world beckons for many eager to see beyond the valleys, where internet and mobile access can be patchy at best.

Even the peace of those valleys is being eroded as tourists from other areas of Pakistan arrive in droves, eager to see the colourful tribe.

An AFP reporter said Prince William listened eagerly as a local guide explained the steps to the dance performed by the Kalash for the royal couple.

Kensington Palace has called the Cambridges’ five-day trip, which ends Friday, their “most complex” tour to date.

Security is extremely tight for the trip, during which the couple is also set to visit Pakistan’s second-largest city Lahore, once the capital of the Mughal Empire.