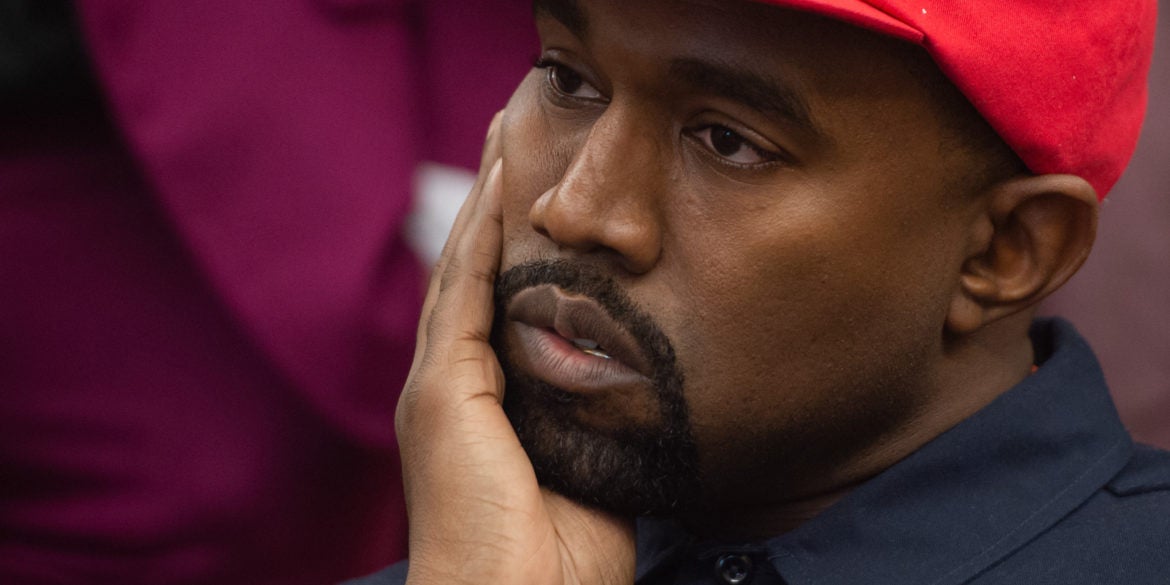 Kanye West is a man who wears many hats — including the Trump campaign’s signature red MAGA cap — but in recent months, he has shed his myriad personas to reveal himself as a born-again weaver of gospel and rap.

After blowing past yet another release time for his long-anticipated album, West finally dropped “Jesus Is King” on Friday, coinciding with the release of its companion IMAX film of the same name.

His new work paints a portrait of the artist as a saved man, coming in a year that’s seen West tour with his impromptu “Sunday Service” performances, a church-esque concert series featuring gospel choirs.

The IMAX film, which clocks in at approximately 30 minutes, shows a Sunday Service at Roden Crater in Arizona’s Painted Desert.

It primarily features static shots of a choir, and ends on West gently singing a rendition of his song “Street Lights,” from 2008’s “808s & Heartbreak,” to a baby that appears to be his son Psalm.

Elements of the old Yeezy appear — clever rhymes, catchy beats, smart samples — but the artist decidedly tilts the balance toward music with a stronger message of evangelical salvation.

“I been working for you my whole life / Told the devil that I’m goin’ on a strike,” West raps on “Hands On,” the ninth song on the 11-track album that features appearances from jazz saxophonist Kenny G and rapper Ty Dolla $ign.

‘The sacred and the profane’

The genre known as gospel rap emerged in the 1980s, not long after hip-hop itself, but stayed in underground circles and received little formal industry backing.

Josef Sorett, a religion and African-American studies scholar, correlates the hiving off of gospel rap to the emergence of gangster rap, which sees artists boast of violence, misogyny and drug use.

“There is a perception of hip-hop as being fundamentally opposed to religious tradition — a distinction between the sacred and the profane,” the Columbia University professor told AFP.

But largely thanks to West and fellow Chicago artist Chance the Rapper, a new holy hip-hop has re-emerged in the mainstream.

West’s overt faith on his 2004 critically beloved hit “Jesus Walks” — which featured gospel wails and martial beats — did not prevent its play on non-Christian radio, marking a shift of sorts.

After “Jesus Walks” but prior to West’s revivalism, Chance had furthered the mainstreaming of gospel-influenced hip-hop with his much-touted 2016 mixtape “Coloring Book.”

Sorett sees West’s efforts to “transcend boundaries” of genre as “less of a gospel aesthetic than maybe a broader sense of an artistic vision.”

“It seems to be a notion of personal spirituality — what is often described as indicative of a new generation that is less tied to institutions or to politics, but to individually driven spirituality.”

Some critics have dismissed West’s new direction as little more than marketing — his Sunday Service merch includes sweatshirts in the $200 range and $50 socks.

“Folks often think of commerce and Christianity as opposed, but they’ve long been entangled, so it sort of makes sense,” Sorett said.

Some critics link West’s biblical shift to his tabloid-perfect outbursts, brush with politics, and struggles with mental health in recent years.

The Grammy-winning performer has openly discussed his battle with bipolar disorder, telling talk show host David Letterman this year: “I feel a heightened connection with the universe when I’m ramping up.”

“It’s like a sprained brain, like having a sprained ankle. And if someone has a sprained ankle, you’re not going to push on him more. With us, once our brain gets to a point of spraining, people do everything to make it worse.”

At a recent Sunday Service in Utah, West defended his decision to back Trump; last October, he delivered a lengthy soliloquy to a president who many deem racist, telling him he loved him to the dismay of many Democrats and fellow artists.

On Thursday, he offered another explanation: “For the greatest artist in human existence to put a red hat on was God’s practical joke to all liberals. Like, ‘No! Not Kanye!'”

Considering the shambolic “Jesus Is King” rollout, fans probably shouldn’t plan a listening session under the tree just yet.

“The more I am in service to God, I just clear my head and just wake up more empty every day and let God do the driving and just use me as he may,” West said in the interview.

“You make plans and God laughs.”