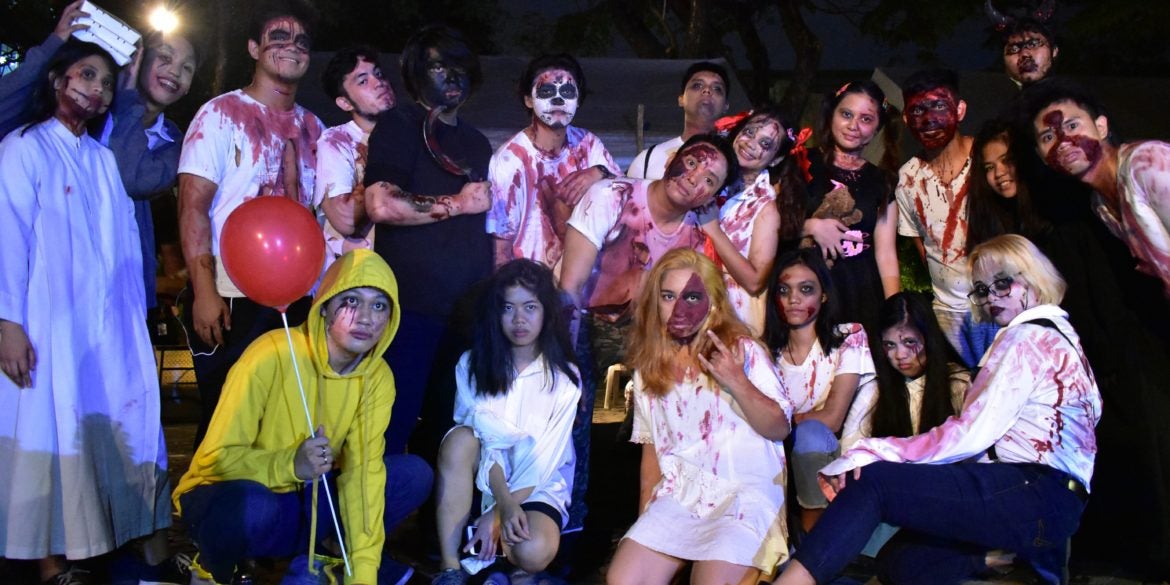 Members of the FEU Cultural Groups in their Halloween best —photos by Ceryl Joyce B. Garay and Sophia Louise Pascual

CreePIYU’s goal isn’t just to scare students, it also aims to impart knowledge about the university’s history in a unique and exciting way.

Thrilling, terrifying, yet informative—these are the words that best describe the tour in FEU Manila at night.

Held on Oct. 23 and with the theme “Asylum,” CreePIYU IV started at 6 p.m. at the FEU Plaza with over 135 participants.

The plaza was transformed into a carnival with different booths, such as the minigames dubbed “Ano ang mas nakakatakot?” (What is scarier?), What’s in the Box, and charades.

There were also tarot card readings and a photo booth where you could take a picture of yourself inside a casket.

Accompanied by two guides, each batch of participants was led to various buildings in the campus, all rich in history and horror stories. Guides opened the tour with the words, “Do not be scared, for this is proof that we, Tamaraws, are brave.”

As they entered each of the buildings, students listened in fear as guides retold the chilling experiences of professors and students.

There was the time a professor saw a headless priest walking by the chapel one night, sightings of a spirit seated on a bench outside the Arts Building, and lost souls roaming around the Alfredo Reyes Hall and the Science Building.

But aside from these stories, the guides also explained the history of each building. For instance, the Nicanor Reyes Hall is one of the oldest buildings on campus, designed by National Artist in Architecture Pablo Antonio.

At the end of the tour, participants were required to enter two rooms. There, they were challenged to find certain objects to successfully escape from the rooms and end the tour.

As spooky as it was, CreePIYU IV was also a fun and memorable way for students to learn more about their school.—CONTRIBUTED