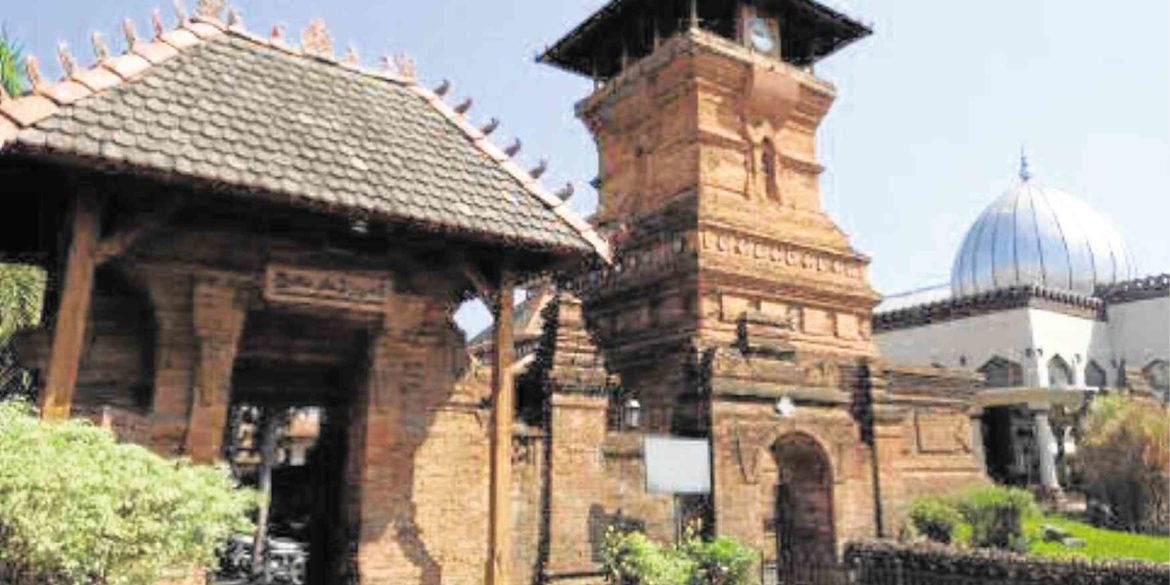 Entrance to the shrine of one of the saints, Sunan Kudus,with Majapahit and Islamic elements

The journey from Surabaya to Cirebon exposed us to a Java far removed from the oily, orange rice Filipinos associate it with

No other country welcomes its guests with whiffs of perfumed tobacco smoke.

While others probably didn’t notice it in the air, I gleaned vicarious pleasure from the sweetness of Indonesia’s iconic clove cigarette, kretek, upon exiting the airport. It was first in a series of sensorial treats to come.

Sometime ago, I went to Surabaya—capital of the Indonesian province of East Java—with a group of Filipinos who have roots in Muslim Mindanao, on a pilgrimage to the graves of the nine Sufi saints.

The trip, supported by Indonesian travel group Aneka Kartika Tours, began in Surabaya and ended in Cirebon on the western part of Java.

The saints or Wali Songo were Sufi missionaries who proselytized Java at the twilight of the Hindu Majapahit empire around 600 years ago.

They brought a persuasion that defines an identity of Indonesia to this day: the largest Muslim country on earth.

Devotees from all over the Indonesian archipelago perform an annual ziyarah or pilgrimage by visiting their tombs across Java and performing Sufi rituals.

The gray stone graves we visited, ultimately memorials of life and reminders of mortality, were sporadic cues for us to enjoy the color of an animated present—tree-lined streets of green Surabaya, motifs of Majapahit’s majesty contrasted by Islamic sobriety along the way, and, of course, cuisines worthy of pilgrimage themselves.

Breakfast at the Bumi Surabaya City Resort shook off any somnolence brought about by the trip from Manila the day before. The warm, mouthwatering spice that wafted from buffet stations set up along the courtyard was enough to stimulate.

It started with sayur lodeh, vegetable broth laced with turmeric plus other aromatics; and tahu tek, fried tofu with cucumber accoutrements for coolness and texture. The eggs, desserts, entrees and beverages were also anointed with spices of local provenance.

At the center, amid trees and morning prattle, were stations for wok-singed fried rice or nasi goreng; stir-fried noodles locally known as mie goreng jawa; and rawon, an East Javanese specialty of beef and broth blackened by fermented keluak seeds. All these, redolent with olfactory delights like fried shallot and lime, pushed the perfunctory “continental” options to obscurity.

One of the lunches we had was in a branch of Ikan Bakar Cianjur or IBC, a local chain that serves Sundanese-style food. IBC’s gurami goreng, deep-fried gurami akin to our binukadkad na tilapia (but tastier and dignified sounding), had a faint trace of anise; while their tart tamarillo smoothie, terong belanda, provided smart contrast.

Another lunch was at Tempo Doeloe, IBC’s ritzier sister. Among its specialities is gurami pesmol, fried fish dressed in a way much like our sarciado sans egg. Apparently, tropical opulence was another speciality, since we enjoyed our lunch al fresco, but with air-conditioning in full blast.

It seemed that our meals were constant streams of pleasure: familiar vinegary ikan bandeng (bangus to us) in Gresik; vernacular expressions of the Southeast Asian fish-vegetable-rice triptych in the quaint countryside; rich carabao meat soto in Kudus; lumpia and bistik of colonial Semarang; sate kambing glistening with strategically placed fat and piquant peanut sauce in Cirebon; and all manner of onomatopoeic crackers kripik and krupuk.

To me, each visit to a grave was associated with the food, accompanied by melismatic sambals that came before or after.

As the different sambals amplified each bite, both envy and questions crept in. Why didn’t Filipino palates develop fondness for such things? Most of the ingredients used in the sambals are endemic and available in the Philippines anyway.

Aside from ingredients, we perceived so many similarities that comparison seemed subliminal and inevitable. Most of us were quick to point out resemblance with our languages and practices.

Since we’re Austronesians, our most evident commonality is the contour of our faces and tan complexion. We were in a different country, but there was a lingering feeling of being at home.

There was, thus, an unarticulated comfort as we experienced different parts of the pilgrimage—strolling around the moonlit gardens of the Hotel Majapahit where nationalist revolutionaries tore away the blue part of the Dutch tricolor, turning it into the red and white Indonesian standard, relishing the obsolescence of rickshaws in Tuban, cheating death going up the winding slopes of Mt. Muria on motorcycles in Colo, smelling sweet ylang-ylang as an elderly lady sprinkled it on the graves of Kadilangu, taking in the culture and clutter at the shrine of Sunan Gunung Jati, praying with the community in a centuries-old mosque in Cirebon.

While we sat cross-legged near the tombs of the saints, listening to lore about them, I wondered about the pervasive theme in the narratives—the Wali Songo’s spirit of tolerance.

It’s said that during their time, outwardly disparate beliefs of Islam and Hinduism coexisted in relative harmony. Of course, their intention was to bring the people to the fold, but it was carried out with gentle ingenuity.

One of them, Sunan Kudus, employed wayang golek puppetry to proselytize. Another of the Wali Songo, Sunan Kalijogo, is known to have used elements of local culture in promoting religion. He used gamelan music, in addition to another form of puppetry called wayang kulit, in his missionary endeavors. Art and music then, not coercion or violence.

The nine-day journey along its northern coast exposed us to a Java far removed from the oily, orange rice that Filipinos associate it with. There, we were reacquainted with the practice of visiting graves, a tradition popular among Muslims in Mindanao in a time before the advance of fundamentalist streams of Islam from the Middle East.

We went at a time when we struggle to protect our identity from puritanical incursions.

As an unlikely pilgrim, I prayed that I be given another chance to come back to revel in Java’s simple joys and once again be confronted with life’s immediate profundities. —CONTRIBUTED