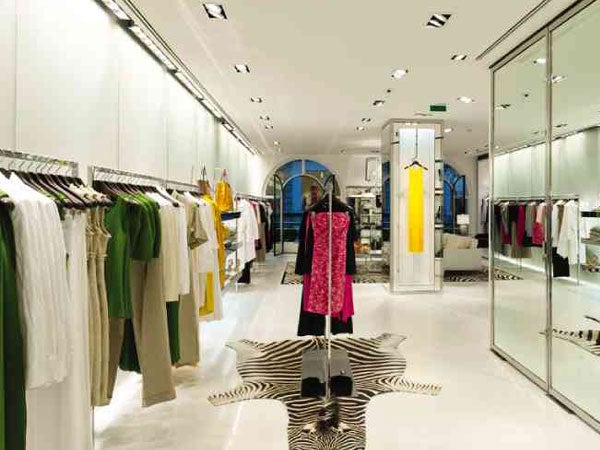 PARIS—IT was the press launch of the Michael Kors boutique on Rue du Faubourg St. Honoré during the recent women’s Fashion Week in Paris for the coming Fall-Winter collections. The Paris store had opened a few days before.

The space, new and expansive, welcomed journalists from around the world. An array of accessories was displayed in glass enclosures; shelves were lined with bags and footwear. As one walked into the store, one saw a glass staircase leading to the second floor, and toward the back the more casual lines of the brand.

Modern chairs lined the tiny corridor on the second floor, a space that clearly defined the elegant and somewhat sporty values of the brand.

“To me, there is grandeur and elegance to Paris and so we did a different take,” said Kors. “There are Louis XIV-inspired sofas but made with silver rubber, there are crystal lamps—little things that change the way the store feels but still connected to other stores around the world.”

The kitschy mix-and-match included zebra-print rugs and a linear marble table topped by giant leaves; lights of round glass clusters and ’60s-inspired chairs underneath.

In the Philippines, one can find items from the line Michael Michael Kors. In other countries, one will find the Michael Kors collection, the line that is seen on the runway, or merchandise from Kors Michael Kors.

“The Paris store is the only one in the world that contains a mix of everything that I do, all the collections, all the different prices,” said Kors, who was clad in a dark-gray ensemble.

“Our lifestyle concept store is like the one we have in the Philippines. But here in Paris, architecturally, we have this space, we have skylights,” said Kors.

The evening saw the brand’s 30th anniversary celebration at the residence of the US Ambassador to France, where several actresses, socialites and models including Vanessa Getty, Jennifer Hudson and Isabeli Fontana were dressed in Kors.

“The walk from Hermès to Colette,” said Kors, “is the ultimate fashion walk. Hermès is the bastion of fashion elegance, and Colette is the trendiest spot in Paris, and Michael Kors, well, it’s perfect for us to be in the middle, because I’m not the trendiest and I’m not the most classic. I’m a blend of the two things.”

Kors mentioned that he was coming to the Philippines, “but it’s not an official arrival. I’ll be there for the holidays.”