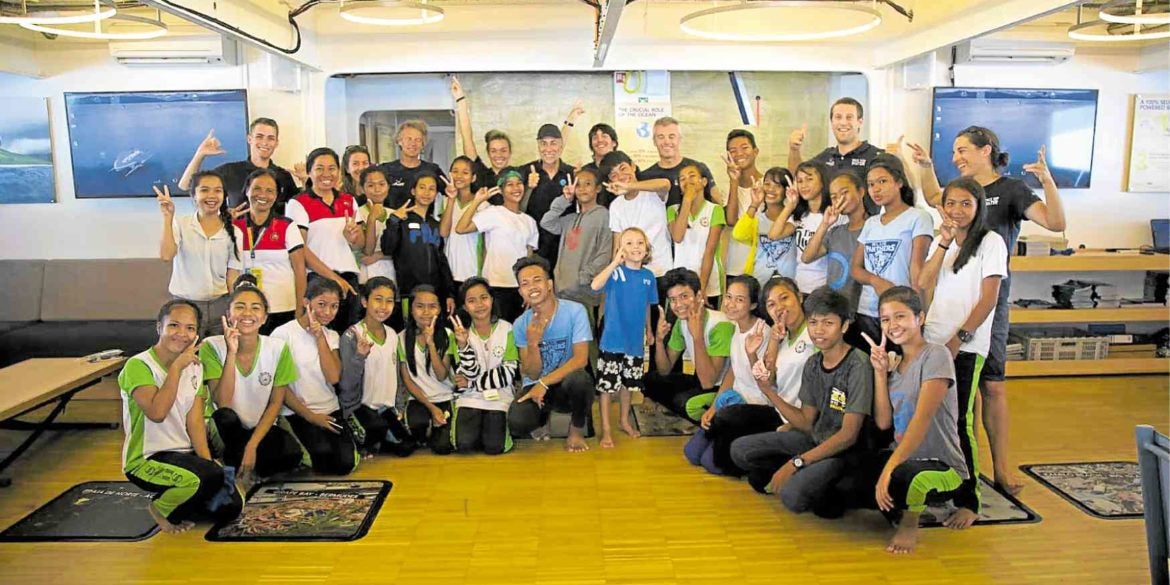 Crusaders against plastic pollution spread the word in Palawan

=‘The islands of Palawan are pure beauty, but also very much threatened by pollution’

Race for Water expedition, the world’s largest solar-powered vessel, just ended a two-week stopover in Palawan. The expedition’s goal is a crusade against plastic pollution in the ocean.

After 10 days in Puerto Princesa spent meeting officials and students, the expedition traveled north toward Pangatalan Island to meet high school students and raise their awareness on plastic pollution.

The story began in 2017 when a crew of French seafarers, engineers, technicians and advocates set out on what would be a five-year journey around the world on the boat, Race for Water.

This ship is a unique prototype as it runs on a mix of renewable energies: solar panels, hydrogen tanks to store energy using water from the sea and a 150-meter-high kite to help the boat’s propulsion.

“Our model is applied to a boat but it can be replicated on land. We produce enough electricity to power a nine-story building,” said Basile Prime, the team’s engineer.

In 2015, after finishing a first expedition to study how plastic trash is polluting the ocean, the team came back with an important message: plastics are found everywhere and the seas cannot be cleaned. The only option is to stop polluting.

As most of the plastic in the sea comes from land, the expedition decided to travel around the world and meet people to foster change.

When stopping in different cities, the crew welcomes politicians, students, industrialists and the curious onboard where they present their “five Rs rule”: refuse, reduce, reuse, repair, recycle.

They expect to meet a total of 50,000 people in the duration of the expedition.

Race for Water was at first invited by the Sulubaaï Environmental Foundation to a stopover in Palawan and help spread their message.

This second foundation, based in Pangatalan Island, works to protect and restore coral reefs with the help of and to benefit local communities.

“We are two foundations pursuing similar goals: to make oceans healthier and resilient for both people and nature,” said Sulubaaï Foundation president Frédéric Tardieu. “The islands of Palawan are pure beauty, but also very much threatened by pollution.”

By visiting the headquarters of Sulubaaï Foundation and meeting high school students, the team carried an important message: Large-scale solutions must also meet local needs. While one travels the world to meet thousands of people and inspire change, there must be focus also on the restoration of a livable nature in a more restricted area.

After the expedition left, Sulubaaï Foundation and the Sandoval National High School organized a cleanup event last Oct. 10. A total of 300 students picked up trash in the whole barangay.

As Dhayan, a grade 12 student, put it, “Plastic pollution is a big problem here. We must all become aware of the situation to change our habits.”