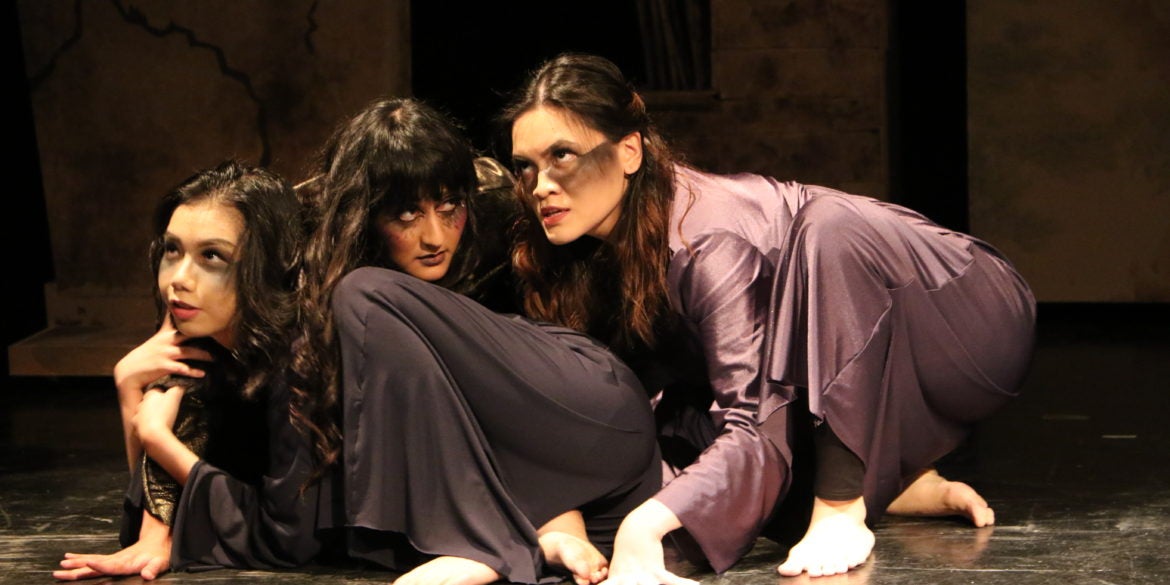 There is often a temptation to stage Shakespeare with all the elegance that centuries of history have infused into the Bard’s works. Even “Macbeth,” one of Shakespeare’s more violent tragedies, has received its fair share of pretty and graceful treatments.

What Theatre Titas attempts to do is the opposite: to strip down this story of kings and prophecies into something brutal and almost unsightly—and that tries maybe too hard to command our attention.

Nothing in this production of “Macbeth” is meant to look desirable, its barren stage (set design by Angelica Lorenzo) and DIY punk outfits (costumes by Jorge Lafradez) rendering the titular general’s lust for power a bad idea from the very start.

Its aesthetic isn’t exactly subtle, though: black leather, fishnets and red accents pointing toward no specific idea, just broad strokes of what madness and violence might look like. So those who like their Shakespeare with visual nuance might be left wanting, but those who are satisfied with chilling blankets of red light (technical direction by Irene Romero) should get their money’s worth.

Director Carlos S. Cariño seems to have taken the same approach with his cast, which pays off the deeper the play gets into savagery. Cariño makes the king’s court come off more like a gang of hoodlums, and the group of witches more like street preachers rather than mystical beings.

Tarek El Tayech’s Macbeth becomes more compelling when he plays the character small, drunken and paranoid, while Issa Litton’s Lady Macbeth gets to be as venomous as the part allows.

And yet much of the play’s second act belongs to Miguel Vasquez, whose Macduff perfectly captures the vengeance of a father wronged.

However, a lack of subtlety also worms its way into some of the performances. Litton’s scenery chewing during Lady Macbeth’s key soliloquies can be excessive, and El Tayech doesn’t hold onto Macbeth’s cowardice and fear as much as he should.

Meanwhile, several members of the ensemble occasionally trip over Shakespeare’s language, while some of the women who stalk the edges of the stage as the witches play insanity on one and only one frequency.

It is through the witches where one can find the core of this production’s issues: by having these women make noise, interact with the audience or linger in the background, “Macbeth” begins to call undue attention to itself—constantly reminding us of the tragedy about to unfold and not putting enough trust in the audience’s own understanding of the text.

“Macbeth” actively tries to disturb the audience (something that Theatre Titas’ own “Ang Paglilitis ni Mang Serapio” did to much greater effect), but just ends up distracting the viewer from what’s really important.

What winds up being “Macbeth’s” greatest strength, however, is its sense of unbridled chaos with which it stages action. Miguel Vasquez’s fight choreography is genuinely thrilling and possibly dangerous for the actors and people sitting in the front row. There is virtually no pantomiming going on here: people swing their makeshift weapons in close proximity with full force, crashing into each other and into empty audience seats, as if inviting the kind of injuries that uttering the Scottish play’s title ought to bring about.

It’s this deliberate scrappiness that ultimately provides so much more insight into Macbeth’s violent mind and “Macbeth’s” violent world.

“Macbeth’s” stubborn opposition to the hallmarks of a traditional Shakespeare production grows more charming as the play goes on. It tends to overplay its hand and doesn’t deliver the exact kind of towering performances one might expect from such a classic tragedy, but there’s still much to enjoy for those who can accept its style.

And if nothing else, this version goes a long way to demystify the text, showing us that tyrants in power are really little more than drunkards in a bar fight, waving their crowns around like jesters.