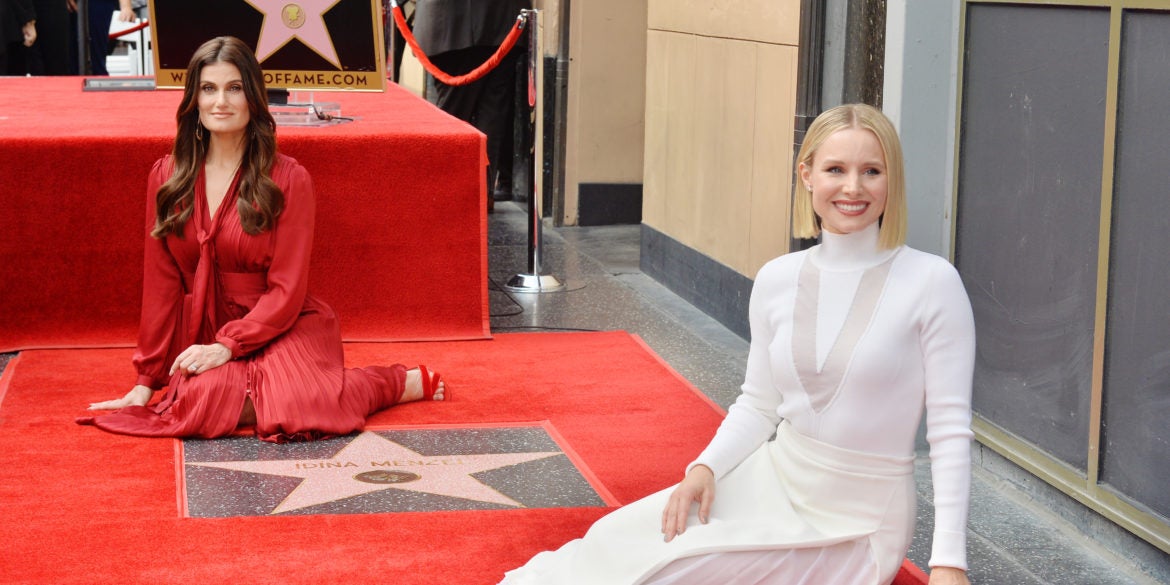 HOLLYWOOD, CALIFORNIA - NOVEMBER 19: Kristen Bell and Idina Menzel are honored with Stars on The Hollywood Walk of Fame on November 19, 2019 in Hollywood, California. Jerod Harris/Getty Images/AFP

“Frozen” actress Kristen Bell was honored Tuesday with a star on Hollywood’s Walk of Fame, joking that a mugger would soon demand a woman’s purse on the same spot with the words “Let it go!”

The pair reprise their roles as Anna and Elsa in “Frozen 2,” the sequel to Disney’s animated smash hit out this Friday.

“I am so grateful to be accepting this honor today on these hallowed streets where ‘Pretty Woman’ sold her body for money — it’s really a dream,” joked Bell.

The ceremony took place toward the eastern end of the Walk of Fame on Hollywood Boulevard.

“The Good Place” creator Michael Schur described the location as “the most glamorous location in all of show business — the semi-abandoned Starline Tours branch office.”

“As wonderful as this recognition feels in the moment, I know that it’s only temporary,” said Bell.

She added: “This star will really only know its true value when inevitably, someone is mugged in that very spot, and as they clutch their purse, the assailant screams, ‘Let it go!'”

“And the victim will look up and say, ‘That’s not even her song, you son of a bitch.'”

“Let It Go,” the Oscar-winning showstopper of the first “Frozen” movie, was sung by Menzel.

Bell also paid tribute to Menzel, who has an enlarged role in the sequel.

“I’m not going to say it’s better than the first because all the music is good,” she told AFP. “But I will tell you they did the smartest thing with the second movie because they decided, rightfully so, to double down on Idina.

“‘Let It Go’ was such a hit, and the geniuses at Disney were like ‘What if we just gave her two songs? Wouldn’t that be like twice as good?’ And guess what — it is,” Bell added.

Cover image: Kristen Bell and Idina Menzel are honored with Stars on The Hollywood Walk of Fame on November 19, 2019 in Hollywood, California. Jerod Harris/Getty Images/AFP