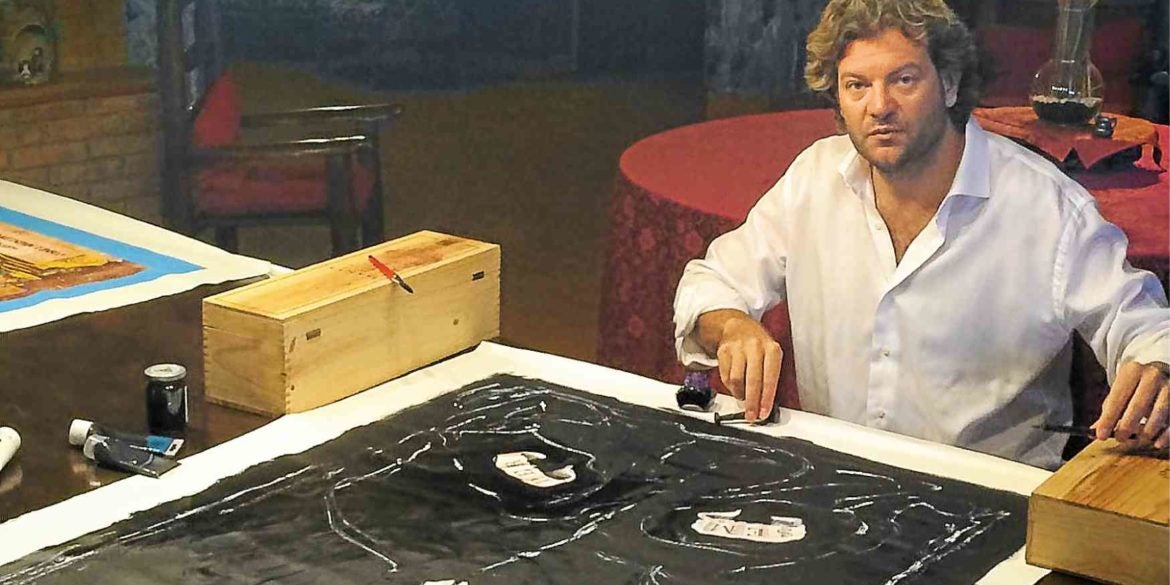 Prince Lorenzo de Medici is a direct descendant of the historic clan that underwrote the Renaissance and pioneered modern banking. He is making the family name relevant again in the 21st century through his art, which he has labeled “Renaissance Pop.”

The 44-year-old prince has joined 70 exhibits in Europe and America, exhibiting the Renaissance Pop portraits of his ancestors who ruled Florence and what would be Italy from the 14th to the 16th centuries. They were inspired by his personal collection of Medici portraits that he has copied and reoriented using more current media, including acrylic paint, fabric and jewelry.

An homage to his namesake Lorenzo the Magnificent, who funded Christopher Columbus’ expedition to the Americas, now has the Stars and Stripes as backdrop.

Based on a piece his late father owned, Prince Lorenzo painted Eleanora di Toledo, who set the stage for present-day first ladies when she was appointed regent by her husband Cosimo I de Medici, Duke of Florence.

“I embellished her portrait with fabric and real jewelry that I designed,” he said.

The Renaissance Pop portrait of Catherine de Medici, Queen of France (from 1547-1559, by marriage to Henry II), depicts her wearing panels of Chanel’s signature houndstooth patterns.

“To France, Caterina brought haute cuisine, perfume and table etiquette—for example, how to use the fork,” Prince Lorenzo said. “She was a progressive woman who protected gay people. These are the stories that I want to tell the new generation through my art.”

Although he is formally tasked with managing the family assets and established the new Medici Bank in Puerto Rico, the prince’s heart is unmistakably in his art. “I am keeping the memory of my ancestors alive by thanking them in a way that nobody has done.”

Taking note of the booming Asian economy, Prince Lorenzo is laying the groundwork for exhibits across the region next year. He has proposed an exhibit in Manila to Silvana Diaz, Italian owner of Galleria Duemila.

He recently spent five days in Boracay’s Under the Stars luxury apartments creating a triptych of portraits, one of them a painting of Arnold Schwarzenegger wearing a yin-yang amulet around his neck.

Before he left Manila, the 6’3” fashionable royal met up with Lifestyle at the Makati Shangri-La for this interview. He said everything he had on was Italian-made—tailored rust-colored blazer and matching scarf, white shirt, light blue slacks and loafers.

He recounted the political and cultural decline in Florence, which started in the early 18th century.

When the last Medici grand duke, Gian Gastone, died without a male heir in 1737, other European countries proceeded to wrest control of its capital city, Tuscany. The power shift scattered the Medici families across Italy and Europe.

Prince Lorenzo’s ancestors migrated to Martirano, a commune in southern Italy, where they became involved in olive oil and wine production, and dyeing silks from the Orient.

Today Medici palazzos and the Uffizi Gallery in Florence, originally the offices of Cosimo I, belong to the state.

His late father Alessandro, an engineer and businessman, built hotels and condominiums in Calabria and constructed an airport and a hospital for the people there.

There’s a bohemian side to Prince Lorenzo that might explain why he tends to maintain a high profile. His mother Krystyna, a painter, is descended from Polish aristocrats. Even as a child, he would paint to express himself.

Heeding his entrepreneurial spirit, he earned postgraduate degrees in finance, international political science, and fashion and luxury goods at the University of Bologna.

He pointed out: “The Italian government collects high taxes. Owing to its big profit margins, luxury is the only sector that can survive. I pursued those degrees because the name Medici represents luxury—better yet, my family invented modern luxury!”

The prince is proud to say he does “a lot of charity” through his art. He produced the Medici Trike, which he dubbed “Art in Motion.” There are only six of these luxury motorcycles in the world, each priced at $150,000.

Coming soon: a Medici hyper car to be manufactured by Piccio Racing Cars. Only eight units will be made, at $2 million each.

Prince Lorenzo shuttles between Rome, his home base, and Los Angeles, where he paints, and from where he conducts business. He would like to spend more time in Texas where his ex-wife Rosemary, a real estate broker, and their 4-year-old daughter, Alessandra, reside.

His marriage to the former Rosemary Johnson was an accidental Cinderella romance. He was one of the royals signed by TLC cable channel to appear in a reality TV series, “Secret Princes.” It was about princes disguised as plebeians in search of true love. His family was against it.

He explained, “The family is low-key. But my mother is Polish so I’m not 100-percent Italian—my mind works differently. I didn’t find anything wrong with having fun.”

He wouldn’t do it again, though. When it was produced in 2012, the Italian economy had collapsed and he felt it was “a perfect time to do something different.”

But the show was unscripted and the princes assumed fake names, wore tacky, secondhand clothing and met women in unusual places. He encountered the Korean-American Rosemary outside a restaurant.

“It started out as a game but soon enough, everything had become real. My life changed,” he said. They met in 2013 and were divorced last July after five years of marriage. “I’m the only divorced member of the Medici family since the 1700s. I fell in love and I’m still in love. It was her decision. She was just different from me.”

The Medicis established a family ethos of using wealth to finance scientific and cultural undertakings. In another magazine interview, the scion said that being a Medici meant not only being progressive; one also needed to consider how to make business prosper to such an extent that it benefits others.

To that end, Prince Lorenzo is the general prior for Cavalieri de San Martino del Monte della Beautitudini, a lay organization that does charity work and espouses values. The members meet periodically at the historic San Silvestro al Quirinale church in Rome.

Last Nov. 17, the prince spent his birthday doing charity work alongside Pope Francis. The birthday coincides with the third commemoration of World Day of the Poor. The implication does not escape him. “I could throw a party in Las Vegas,” he said. “But I’m perfectly happy to be with the Pope, feeding the hungry.”