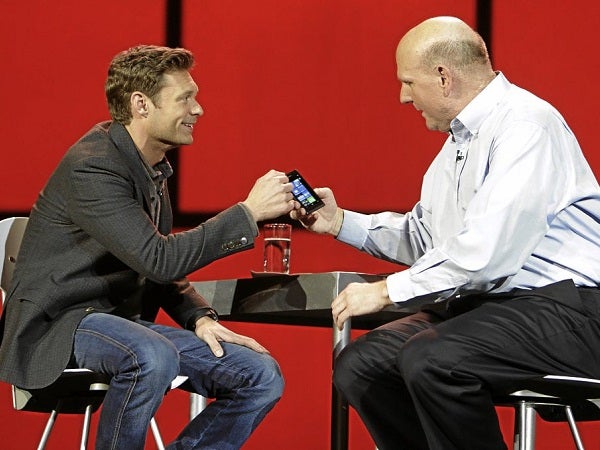 Windows to the future

LAS VEGAS—“Hit the face of Bill Gates,” motioned a suspiciously tanned Ryan Seacrest to the bald man seated beside him.

The bald man was the Silicon Valley billionaire Steve Ballmer, better known as the chief executive officer of Microsoft.

Clasped in Ballmer’s left hand was a touchscreen phone, where a profile photo of Gates was boxed within one of the graphic “live tiles” of the gadget’s homescreen.

“It says I missed a call from Bill!” Ballmer told the “American Idol” host as his right finger rested on the bespectacled face of his golf buddy and former boss. “What time did he call? 6:07 p.m.”

In a darkened ballroom of The Venetian hotel, Ballmer—with the help of Seacrest—was demonstrating Microsoft’s latest innovation, the Windows 8 smartphone, to a crowd of thousands.

This was, he announced earlier, his last keynote speech at the annual Consumer Electronics Show (CES) in Las Vegas, where some 3,000 companies showcase more than 20,000 products to an estimated 150,000 visitors from around the world.

For techies that make the yearly pilgrimage to the Nevada desert city that never sleeps, CES—the birthplace of the VCR (1970), CD (1981), Nintendo (1985), and Tetris (1988)—is like a strip club of the latest electronics.

Microsoft, a top exhibitor since Bill Gates first took the stage in 1995 to unveil his company’s public face, will not be returning to CES in January 2013.

But its swan song at the world’s largest gadget show and technology trade fair did reaffirm its place at the top of the electronics food chain.

The software giant’s impressive line of products—Windows Phone, Metro, Windows 8, Xbox 360, Kinect, Skype and Sync—may have done all the talking at the 2012 CES. Ballmer, however, is the ultimate silver-tongued salesman, and one famous for his powers of persuasion.

In these exclusive excerpts from his 90-minute forum with tech geeks of all shapes and stripes, Ballmer gives the world good reason to believe that the future is not a million light years away—it’s already happening right this minute.

On the Windows Phone

“Phones these days are [all about] a sea of icons, a sea of applications. That’s your view of the world. But the Windows Phone puts people first—those who are important to you. We tweet, post, email, and text. But what’s really essential is what’s going on with your brother, sister, co-worker, your Twitter feed. [With the Windows Phone] these get consolidated down to where, at a glance, I can really see what’s going on with them. We have apps. We have a great browser. [That’s why] the New York Times called the it ‘gorgeous, classy, satisfying, fast and coherent.’”

On the Metro interface

“The new Metro style user interface is a celebration all of the relationships in your life. We have one place where that all comes together—the People Hub, which the brings together all of your favorite people across all of your favorite social networks. These Live Tiles are constantly lit up, not just when they link to that application, but the content that’s actually behind it. We make it really easy to mirror the relationships you have in real life on your phone.”

“Xbox represents the best part of our DNA. We make these big, bold bets. We invest for the long-term. And we make exciting things happen. And 10 years later, we’re the world’s sales leader for consoles, which is exciting as heck. Today we have over 66 million Xbox users.”

“The ability of a computer to see you, recognize you, and hear you really sparked the imagination. Kinect revolutionized entertainment, and we’ll see it revolutionize other industries, from education to health care. I’m thrilled to announce that Kinect is coming to Windows in February. We’re already working with more than 200 companies—Toyota, Telefonica, Mattel, American Express, and more—on unique Kinect applications. The breadth of what they’re doing is mind-blowing!”

On Skype and Sync

“Sync [Microsoft’s voice-controlled in-vehicle communication system] is now powering intelligent experiences in over 4 million Ford vehicles. And I think we’ll reach 9 million additional cars in the next three years. We also acquired Skype last year. It’s amazing and we’re focused on making it even better for the 200 million people who use 300 billion minutes of Skype voice and video annually.”

“We have a chance in the year ahead to really raise our game to the next level—across phones, PCs, tablets, TV, the Xbox. The heart and soul of that will be our new Metro user interface. We pioneered it over the last few years — it’s fast, fluid, and dynamic, and really helping people to connect directly to the people, information, music, and friends that are most important to them. So, what’s next in 2012? Metro, Metro, Metro. It will drive the new magic across all of our user experiences.”

From interactive whiteboards to innovative smartphones, here are coolest Microsoft Windows-based gadgets that were unveiled at the 2012 CES in Las Vegas

Available in cyan and matte black, this user-friendly Nokia model features a 4.3- inch AMOLED ClearBlack display that provides a superior touch-screen experience on a device that still fits easily in your hand.

The latest smartphone from HTC Corp. boasts the largest display among Windows phones globally; an advanced 16-megapixel digital camera; and access to the lightning speeds of 4G LTE.

The world’s slimmest and most flexible 27-inch, all-in-one media device. It combines a frameless display (supporting 10-point multi-touch for greater accuracy) with a widely adjustable screen angle (from -5 to 90 degrees).

A half-inch thin and weighing less than 2.5 pounds, this premium ultramobile Windows laptop was crafted to turn heads with its aluminum unibody design and polished edges.

The all-new Z Series, with Windows 7, introduces the next evolution in ultraportable laptops: second-generation Intel Core processors (up to 2.70 GHz) and a fully powered dock with AMD graphics.