‘The King’: Interesting but not memorable | Lifestyle.INQ ❮ ❯ 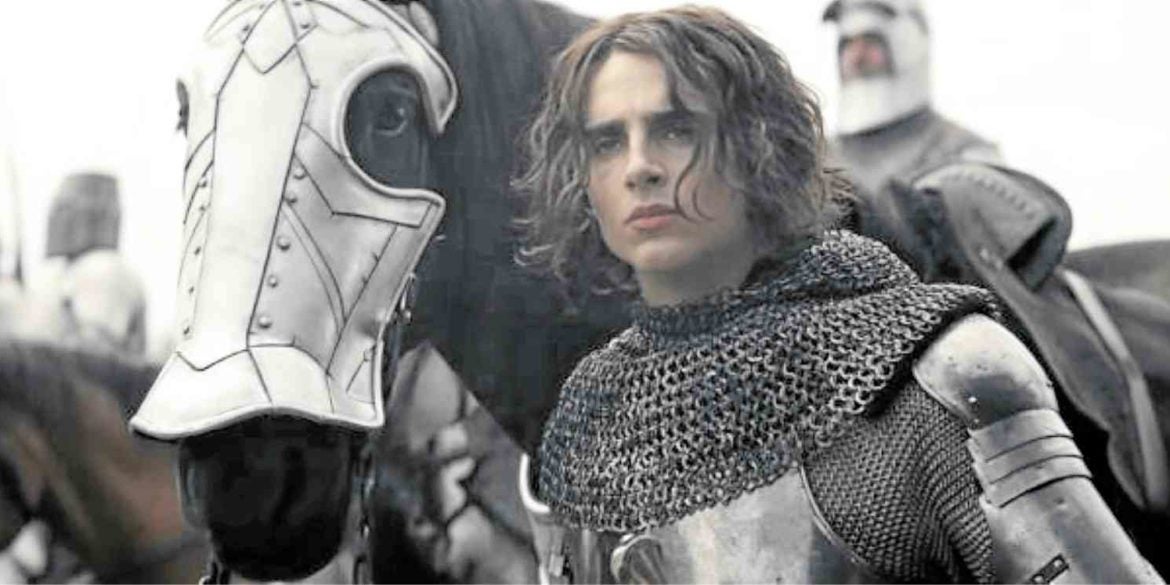 ‘The King’: Interesting but not memorable

“The King” is a Netflix film adapted from Shakespeare’s “Henriad.” It chronicles King Henry V’s (played by Timothée Chalamet) reluctant acceptance of the crown, and the wars and political machinations he has to deal with to rectify his father’s (Ben Mendelsohn) debauched rule as king.

What’s evident throughout is that director David Michôd is attempting to stage a Shakespearean epic through a film that acts as an abridged “Game of Thrones” season.

Michôd explores the corruptive self-interest of power and the savagery of war—the first shot is literally of a soldier walking past muddied corpses on a desolate battlefield described as having happened in 15th-century Europe.

But it’s also depicted in the film’s main narrative of the boy king, who is actively against unnecessary bloodshed, being politically forced into a war.

The Shakespearean elements are present all throughout the film, but it’s also unavoidable to bring up the “Game of Thrones” comparison.

The film has an extensive cast (with “Thrones” Tommen Baratheon actor Dean-Charles Chapman playing Prince Thomas), characters of different moral values talking of politics and schemes over small council meetings and garden walks, and a large-scale battle (influenced by “Thrones”’ “Battle of the Bastards”) that is neither glorious nor the finale of the movie, which only serves to undermine the epic moments.

The political and familial drama in the film’s first act establishes a good sense of character and sets up a gripping internal conflict.

The director is also aware that while the battles are bloody and soulless, there’s still some humor to be found in that they’re essentially petty schoolyard brawls between aggressive boys.

The film earns those laughs and lets the ridiculing of these wars manifest through the point of view of its best character, a drunk knight (Joel Edgerton) who respects the intrinsic value of human beings and their feats, but isn’t deluded by the “glory” that comes by the making of one’s own values.

That said, the film doesn’t attempt at any commentary further than the depiction of war as dirty violence and purely a result of vanity and self-interest. The film could’ve gone to greater lengths to explore those ideas in new and interesting ways.

As it stands, the film feels restrained to tell a straightforward historical drama. Hal’s struggles as king are presented more as a burden to retain righteousness while making decisions where there don’t seem to be any right answers.

It’s a tough conflict, to be sure, but the film arguably would’ve been more compelling had Hal struggled to keep his sanity amid the temptations of indulgence and bloodlust.

On that front, “The King” is also subdued. Key deaths are cut away from or just alluded to off-screen. It’s difficult to be sold on the idea of the bloody savagery of war when blood is spilled off-screen most of the time.

The film could’ve indulged more in its more outlandish elements, most notably the antagonist of the Dauphin (Robert Pattinson). Pattinson’s character and wacky accent are merely thrown into the mix of political conflict really just to stir the pot, but he’s an interesting character.

His role as the foil, but not ideological antithesis to the King, is rightfully restrained, but Pattinson’s off-putting delivery of an insecure prince begs that the film explore his character more, instead of focusing more on the characters reacting to him or talking about how to deal with him.

It felt like the narrative was still reeling from his character when the last 20 minutes of the film decided to quickly wrap up with an entirely different, but still foreshadowed, conflict.

This emerging conflict could’ve been given more time to becoming pressing within the narrative, because it fails as a curtain reveal.

Additionally, the third party that complicates the matter could’ve been developed more, by literally being in more than one scene. The last 20 minutes could’ve been the third act on its own, had it not rushed toward the finish line.

“The King” is weighed down because of this kind of adherence to a familiar model. The film’s depiction of war is interesting, but it won’t be that memorable, given how it essentially does the same thing as all the other bleak medieval war films before it.