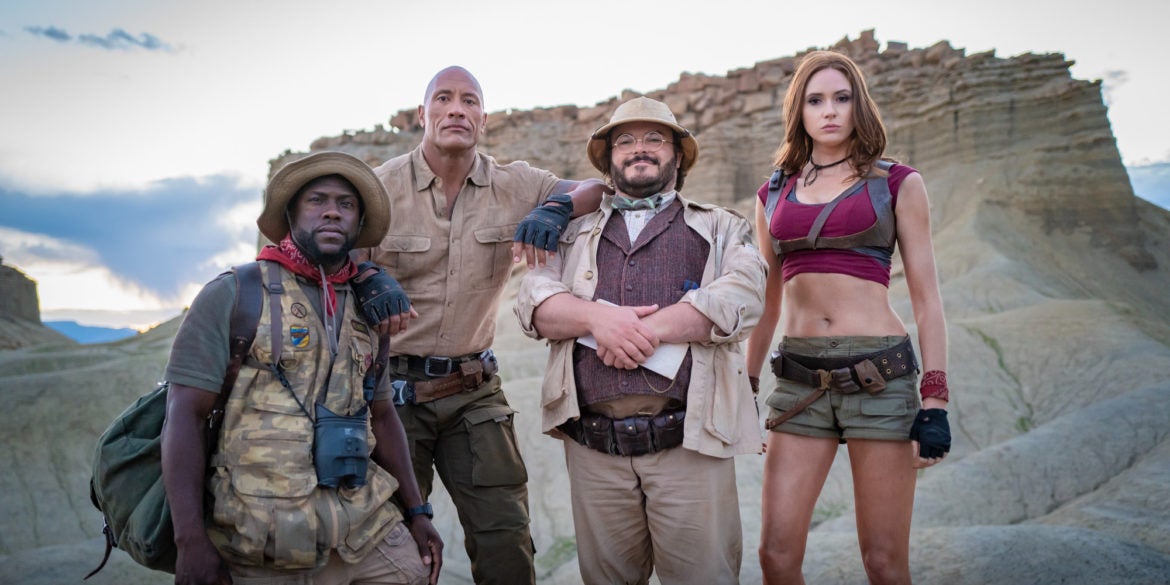 A surprise bit of quality entertainment, the reboot that was “Jumanji: Welcome to the Jungle” two years ago was a necessary injection of fun and adventure in a Hollywood landscape usually focus-grouped to boring death. The new sequel, “Jumanji: The Next Level,” is able to keep that spirit of fun while injecting new elements and twists to keep things interesting and fresh.

The four kids from the first film are now out of high school and in their first year of college. Coming home for break, they’re excited to see each other, though Spencer (Alex Wolff) seems to be hiding some of the problems he’s been going through as a freshman in New York. When he misses an appointed get-together, the rest visit his home, are unable to find him, but do encounter his uncle Eddie (Danny DeVito) and Eddie’s former business partner Milo Walker (Danny Glover). Then they find evidence in the basement that somehow, and for whatever reason, Spencer has gone back to the world of Jumanji. Naturally, a rescue attempt is undertaken. But there’s some flies in the ointment, as the console they broke apart at the end of the last film is haphazardly repaired and malfunctions. Instead of taking Bethany (Madison Iseman), Uncle Eddie and Milo are sucked in with them, and they must find Spencer while on a new mission to thwart their new baddie, played by “Game of Thrones”’ Rory McCann.

This new installment allows itself some growth. Things continue to be grounded by real-world issues that the kids are dealing with; in this case, Spencer’s troubles adjusting to post-high school life. He thought it would be amazing in New York but things haven’t quite turned out the way he anticipated, and his relationship with Martha hit the skids. There’s a slight nod to the dangers of escapism in his story, and that, coupled with Eddie and Milo’s broken friendship lends a darker edge to the proceedings, as issues of mortality and change get some time in the narrative.

The cast elevates the material, and the caveat of new “players” at the helm of the avatars played by Dwayne Johnson and Kevin Hart actually results in the best acting of their careers. It demands that they stretch their talents for things to work, and they do so with gusto. Seeing Johnson do DeVito and Hart do Glover doesn’t get old, but the filmmakers don’t give it the chance to, either. Jack Black and Karen Gillan also get in on the fun with some body-swap hijinks, and Awkwafina makes for a great addition to the gang, surprisingly moving when she has to do some of the heavy lifting in the drama department.

The movie is still loyal to its video game roots, having fun with root menus and other tropes that keep it funny and meta while still being a good excuse for solid adventure scenarios. This gets more mileage when you introduce two senior citizens who aren’t familiar with video game tropes at all, and the laughs continue. Turns out, Jumanji has some new tricks up its sleeve, and it looks like they’re not resting on their laurels.