Holiday guide: Tagaytay, beyond the city, on to new destinations and eats | Inquirer Lifestyle ❮ ❯ 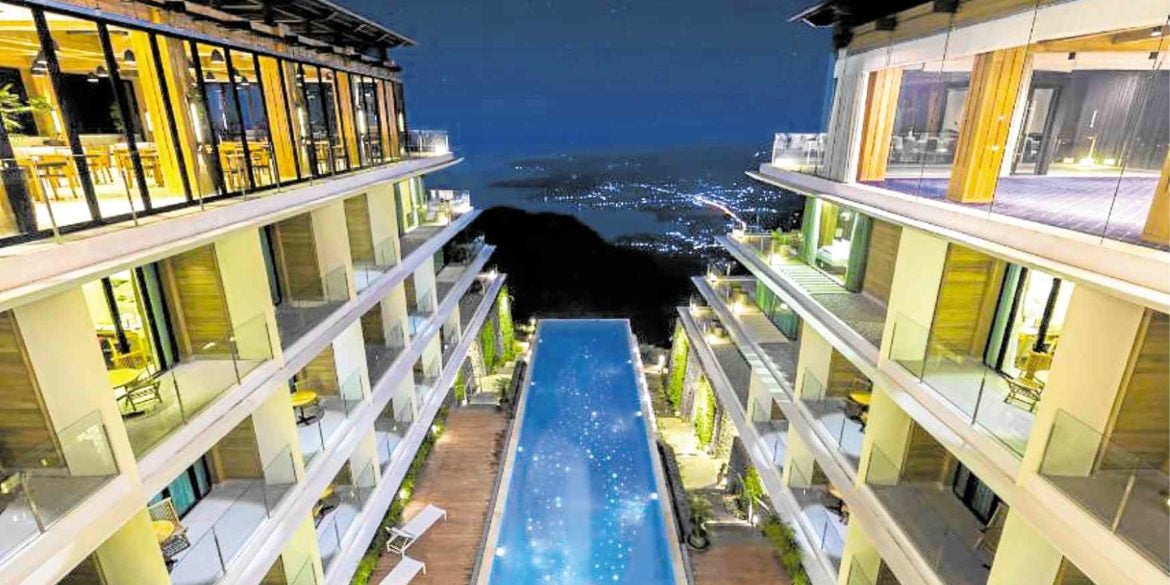 Holiday guide: Tagaytay, beyond the city, on to new destinations and eats

Tucked in bucolic Alfonso, Cavite, is an upcoming nature resort, Maka, which means “where good spirits reside” in ancient Tagalog.

Green building construction uses quarried materials that tend to destroy the earth. With the construction boom, Yumang foresees a shortage of gravel and sand.

“At Maka, we coexist with the wildlife. We don’t discipline the habitat,” says Yumang. “If you take out the topsoil, you remove the microorganisms. Life is displaced. That’s why there is dengue. But the dragonflies here eat a hundred mosquitoes daily.”

Maka is a rustic bed-and-breakfast which serves dishes using ingredients from its forest, like sinisig ng puso ng saging and catmon soup.

The architect tapped the tactile quality of organic materials such as wood and stone, and combined them with the expressiveness of construction elements such as raw concrete and metal.

Elements of nature such as wood-patterned ceilings, bamboo poles and rocks link the guest room interior space with the outdoors.

Yumang repurposes corsten steel, from a job site, into a lavatory. The bathrooms feel luxurious, with a hardwood shower deck rimmed with pebbles.

The activities invite you to reflection. Earthing is a walking meditation on bare feet to feel your balance with nature. Forest bathing is hugging and talking to trees to absorb their energies.

Maka can also arrange thematic tours. The eco tours take guests to under-the-radar destinations such as the historical trail Mt. Buntis in Maragondon and Saluysoy Falls in Alfonso.

Spiritual seekers can find solace in the Daughters of Charity and SVD convents.

Heritage tours include the Bonifacio Trial House in Maragondon and ancestral homes in Taal, Batangas. The culture tours include fire dancing in Alfonso and fiestas in Cavite.

The planned 18 villas will be built with ancient materials such as cross-laminated timber-engineered wood from a renewable resource and compressed earth blocks.

Theme landscapes such as the Cosmic for meditation and Moonlight Garden for night blooms will enhance the experience.

Yumang’s ultimate vision is to build a subdivision based on the principles of regenerative architecture.

It’s not unusual to see Bentleys and Lamborghinis parked outside this hotel, which is in the lower ground partly concealed from the road, with only the lobby and second floor in view.

In the lobby, the large structural columns are pushed to the side so that guests are immediately drawn to the view of Taal Lake and Volcano. “Once you step inside, you don’t feel the architecture, you experience the scenery,” says Lopez.

The reception makes a statement with its suspended metal counter.

The hotel’s tiered floors follow the contour of the slope. The guest room floors are tiered beneath the lobby. Yet the rooms are bright and airy as the windows capture the views of water and clouds. The building hugs the terrain—a safety feature against earthquakes.

The luxurious feeling is conveyed by voluminous space, the sheen of aluminum powder-coated metal with back lighting for depth, mahogany for warmth and local marble for texture.

As a dash of humor, the 25-meter lap pool is shaped like a tawilis, the freshwater sardine found in Taal Lake.

The hotel commissioned local artists to create art that will give the hotel a sense of place. Alfonso-based Jinggoy Buensuceso created two metal plates interpreting the earth and the moon. Reg Yuson of Tagaytay will sculpt a modern impression of a volcano.

“I wanted something modern but with a resort feel. People can wear suits and won’t feel out of place. That’s why many weddings and receptions have been held here,” says Lopez.

Escala specializes in bespoke experiences. Guests can express their preferences of room setup or special events celebration, or request for food not on the menu.

Families can get discounted tickets at Sky Ranch through the hotel’s tie-up. Yoga practitioners can meditate and do their sun salutations on the rooftop deck.

This family hotel has a menu that is kid-friendly, such as the signature Escala pizza of beef, bacon, cheese, mushroom and pineapples, mini burger sliders, nachos with beef jalapeño and milk shakes.

The range of desserts is wider—tres leches cake shaped like a tower, tablea cake, strawberry cake, tiramisu with chocolate truffles and blueberry cheesecake. The ingredients are locally sourced, and the hotel makes its own bread and tofu.

Although this restaurant has been in Alfonso for a decade, husband-and-wife chefs Orvin and Sigrid Sayos always up the ante.

Recently, it put up a large, colorful tent for garden receptions and a country-style store for kitchen and dining accessories.

The garden is aromatic, from the scents of Thai basil, edible florals such as the blue pea flowers and cosmoses.

Customers are drawn to the fragrance of the cooking, the creamy curries, the complex flavors of the viands and the healthy desserts.

Although the chefs have mastered the art of balancing Thai flavors with the freshness, Orvin says there is something Filipino about the dishes. Local ingredients and the chef’s mood for the day temper the robust flavors.

Orvin created the salted egg fried chicken, glazed and crispy outside but tender inside.

“It’s got the right amount of kick from the kaffir and fresh curry leaves from the garden,” he says.

Unlike the Thai fried chicken street food which uses rice flour for a crisp coating, the chicken breast is dredged in bread crumbs until it is crisp. Yet the marinade flavors seep deep into the meat.

The shrimp paste rice uses bagoong from Cavite instead of the import from Thailand. Aside from the shrimp paste, rice is topped with shallots, egg, raw long beans, sweet pork, green mangoes and dried shrimps.

“You need to innovate or be resourceful. We don’t claim to be an authentic Thai restaurant,” says Orvin.

The tofu dishes are simple but flavorful. Orvin says it’s the freshness and firmness that make the tofu special. It is sourced from a hole-in-the wall store in Sta. Rosa, Laguna.

Six years ago, it started as a tiny deli specializing in European-style breads, dried meats and weekend special menus.

Today, Deli de San Honoré is more than a deli. It has expanded its lanai to accommodate wedding receptions.

Chef Jeremy Joson studied at the French Culinary Institute in New York. On weekdays, he’s in Manila doing corporate catering. He opens the deli from Fridays to Sundays to cater to Tagaytay’s weekend market.

Joson’s innovation, the gouda cheesecake, was an accident. His brother bought cheeses in bulk from a sale in Hong Kong, thinking they were parmesan that normally topped the cheesecake. When the chef opened the package, he discovered it was gouda.

While parmesan is sharp, gritty and savory, gouda is sweet and fruity. Joson suffused the cheesecake with gouda and it turned out to be a hit.

The deli’s bestsellers are the aged sausages and local meats like wild boar that has been salted and aged in a controlled environment. As in the ham in French delis, the jambon blanc is poached overnight in flavorful broth, then cooled in ice.

Joson incorporates local ingredients in the recipes. The wood-fired pizza crust, the ciabatta and pan de sal are made from sourdough using Tagaytay pineapple enzymes as a starter.

The sourness is subtle without overpowering.

Antique Rep. Loren Legarda has been a loyal customer, especially for the dense and flavorful pan de sal.

The duck egg brazo de Mercedes uses the egg from the little duckling. Instead of blueberry, the classic cheesecake is topped with roselle jam.

This rustic restaurant in Silang is special not only for its authentic Caviteño cuisine, but also for the bonhomie owner. Third-generation restaurateur Manuel “Sonny” Lua named the restaurant Asiong after his father, Ignacio, a barber.

Lua likes to retell its origins. In 1959, a fire razed downtown Cavite. The fire did not destroy the Lua home, but the water cannons did.

Since Caviteños had no place for leisure or dining, Lua’s grandmother, Jacinta Nocon, set up a stand on the sidewalk and started cooking heritage dishes such as sinigang na bayabas, escabeche and bopis (called gopes in Chabacano), made of pork innards, with vinegar and annatto.

One day, a bank employee, was drawn to the smell of Lola Jacinta’s cooking and requested a sample. He immediately asked for a second helping. He brought an officemate in the succeeding days.

Asiong, being a cook himself, decided to set up an eatery even if the fire left the city with no electricity. Asiong and his mother started with vinegar-based foods. Lua’s mother, Jacinta, complemented the viands with her native desserts.

In 1960, the eatery evolved into Asiong’s Carinderia and Café. In 2016, the restaurant moved to Silang.

The country-style ambiance is made romantic by Lua’s landscape of bamboo groves, indigenous plants, herbs and vegetables.

The restaurant is patronized for its crispy pusit or fried calamari, and local dishes, such as pansit pusitor rice noodles with squid ink and crunchy toppings; guisadong bagoong na itlog sa isda, a rice dish enriched by crab fat and complemented by fish eggs; blue marlin and chilli; and the classic kare-kare, whose sauce is made from roasted ground peanuts.

One of the specialties is morcon, the meat roll made from pork, raised in Indang and fed with pineapple, not commercial feeds. “It’s my way of helping the farmers,” he says.

The merienda is a diet buster. Asiong offers the classics such as puto made from jasmine or dinorado-based rice flour and coconut milk. The pan de trozo, the log-shaped bread that originated in Rosario, is paired with homemade quesillo, infused with rosemary and garlic. This cheese follows his grandmother’s recipe using fermented carabao milk with vinegar and salt.

“The old-fashioned way does not use rennet,” says Lua.

Unlike other vendors who use food coloring for sapin-sapin, Asiong combines layers of the rice base with ube halaya, and coconut meat with pink hues.

Instead of clear broth, the bulalo uses rice wash for stock.

Lua has modernized the cuisine while retaining the classic flavors. The bibingka galapong cheesecake is prepared like a classic baked rice cake but infused with cream cheese. Instead of using a modern oven, it is cooked the rustic way, with charcoal under the oven.

As an homage to Cavite specialties, he substituted the classic Graham cracker crust with Jacobina biscuits from Mendez City. The dark layer is flavored with kapeng pahinis from Amadeo, the cream cheese made from carabao milk from General Trias. It is topped with chocnut from Imus.

These desserts go well with fresh roselle juice or roasted rice coffee with kaping pahinis, which has a full body without the acidity.