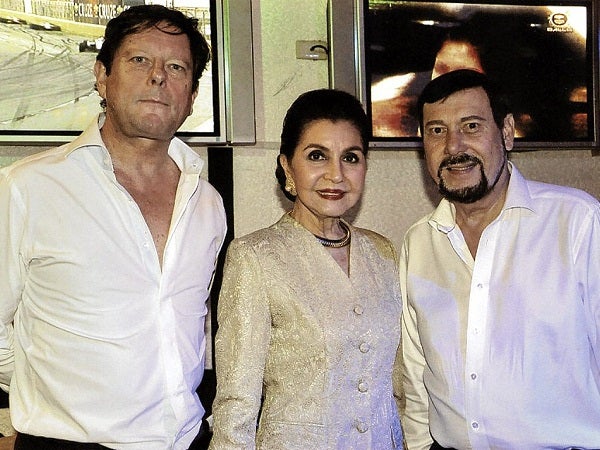 It was an “asalto” for Michel Lhuillier on his birthday at the family-owned Gustavian restaurant in Banilad. Loving wife Amparito Llamas Lhuillier, who is the helm of the place, made sure the menu and service were special.

Well-wishers were led by their son Michael Lhuillier, who is now based in California, and Michel’s lovely sisters—Marguerite Lhuillier and Angie L. Mathieu with her son Mickey Paulson who was here on holiday.

Cocktails and pica-pica were served at the Tap Room, where a surprise performance took place. Marco Polo Plaza Hotel general manager Hans Hauri and his wife Bo couldn’t come, and so they sent birthday greetings by way of a musical group from the hotel.

Led by resident manager Julie Najar, food and beverage director Stefan Wieprich and executive chef Luke Gagnon, they danced into the hall singing “The Shadow of Your Smile,” followed by “Besame Mucho” in spirited Spanish. They presented a cake whose candles Michel blew off, and they exited swaying as they sang “Quizas, Quizas, Quizas.”

Next event at the Gustavian had Michel Lhuillier in his role as Honorary Consul of France, hosting with Amparito a farewell party for French Ambassador Thierry Borja de Mozota. He will soon conclude his tour of duty in the Philippines, a posting he has enjoyed immensely.

Ambassador Borja de Mozota has made 10 visits to Cebu, each of them a memorable occasion. “Thank you so much for your hospitality,” he told Michel and Amparito, adding that he has tried to visit as many provinces as he could.

In response, Michel also thanked the ambassador for all the cooperation, especially in establishing Alliance Française de Cebu. “You are the best Ambassador of France we ever had,” said Michel, raising his glass. “And you are the best Consul of France Cebu ever had,” someone said as a rejoinder.

It was quite a lively party, with numerous guests. Pre-dinner cocktails were served at the Tap Room, with everyone giving superlatives to the home-made pate de foie gras and terrines, the array of cheeses, and the marinated salmon.

Dinner followed at the main area, with a carving station for the prime rib eye. “Are you lining up for seconds of it?” someone asked me. “Yes, for the spinach,” I answered. “It’s all about how it has been buttered and sprinkled with garlic,” said Myrna Rodriguez, wisely.

Next evening, Michel and Amparito hosted an intimate dinner for Ambassador Borja de Mozota at La Vista, their hilltop residence in Maria Luisa Estate Park. Casual chic, said the invitations, and that can be elegance of the first water when the occasion is hosted by the Lhuilliers.

Chilled Dom Perignon from magnums was served the moment one stepped into the gazebo, which commands a scenic view of Cebu and nearby isles. The ambassador was one of the first to arrive, with Cecile Boulies, followed by Louis and Honeylet Thevenin, Marguerite Lhuillier and Charles Lhuillier, Michel and Amparito’s eldest son.

The champagne flutes merrily clinked upon the arrival of Cebu Gov. Gwendolyn Garcia, accompanied by Carlos and Mariquita Yeung.

Dinner was served in the formal dining room. Michel and Amparito were complimented for the excellent menu, impeccably served, and the table’s décor. There were small vases holding fragrant white lilies and blue hortensias, interspersed with Lalique crystal swans which reflected myriad flames from candles that flickered in the cool evening breeze.

Everyone greeted Honeylet Thevenin a very happy birthday at the stroke of midnight. “Let’s celebrate,” said Margie Lhuillier, giving a list of possible places where to continue the party.