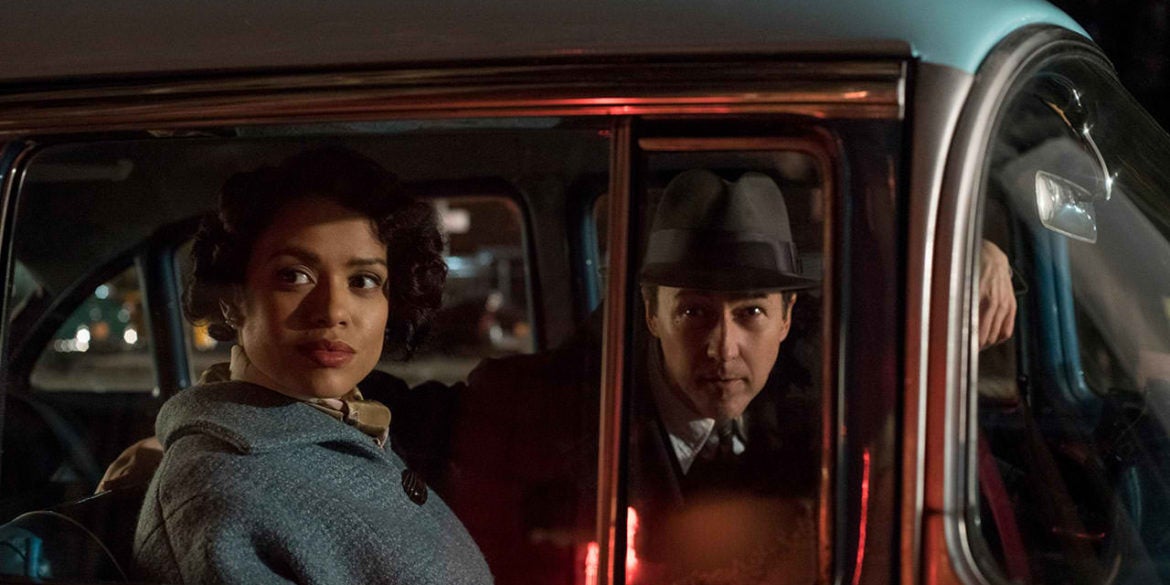 Actor Ed Norton steps behind the camera and back into the director’s chair for the first time since 2000‘s “Keeping the Faith” to helm this passion project he’s been developing for years, an adaptation of the Jonathan Lethem novel, whose script Norton wrote himself.

In “Motherless Brooklyn,” Ed Norton plays Lionel Essrog, a private investigator with Tourette’s working for Frank Minna (Bruce Willis). An orphan, Essrog was “rescued” in a way by being taken under the wing of Minna, who taught him the business. Along with three other fellow boys from the orphanage, they became “Minna’s Men.” When a case they’re assisting on goes terribly awry, Essrog takes it upon himself to figure out what happened, and why. Along the way he meets charcters like Laura (Gugu Mbatha-Raw), who works for Gabby Horowitz (Cherry Jones); the both of them trying to raise awareness against the city’s unfair efforts to squeeze out poorer families (especially minorities) from neighborhoods they want to redevelop. These efforts are led by Moses Randolph (Alec Baldwin), and somehow an engineer named Paul (Willem Dafoe) figures in the mystery.

Norton clearly has a love of the material, as he falls in love with the world so much he allows it to crawl to a length of over two hours, but it’s easy to see why he’s so indulgent. The film is very much a tip of the hat to the classic gumshoe/private dick movies of Old Hollywood; not exactly a noir but not overromanticized, either. It likes to stay in the gray areas; revealing aspects of characters that make you question whether we should be rooting for them in the first place. Norton even changed the time period of the story closer to that classic era, and so the trappings of that genre fit right in.

Norton says he called in all the favors he had to get the film made, and that likely included casting, because he’s assembled a fine one, and gets great performances from Mbatha-Raw and Bobby Cannavale, who plays one of his colleagues. Dafoe is also excellent, but that’s to be expected; he’s had an exemplary year, what with “The Lighthouse” and this. Daniel Pemberton’s score is also a highlight, it’s no surprise he was just nominated for a Golden Globe for it.

It’s enjoyable to watch good performers working things out, and that’s the bulk of the movie as the plot slowly unfolds, but Norton isn’t afraid to stop the movie at a dime and drop a sequence where a song plays out from beginning to end as two characters share a dance. Things happen plot-wise in the background and if you’ve been paying attention to the voice-over narration there’s also a gestural payoff but otherwise it’s just a lovely visual with accompanying lovely music. It’s these moments that stand out, even if the parts don’t make for a completely satisfying whole. The ending could’ve landed with more impact, and aspects of the mystery remain baffling even when the revelations end, but if you’re invested in the characters through the talented actors’ performances, then “Motherless Brooklyn” takes it home; it just takes its time getting there.