Something happened on the way to U2 | Lifestyle.INQ ❮ ❯ 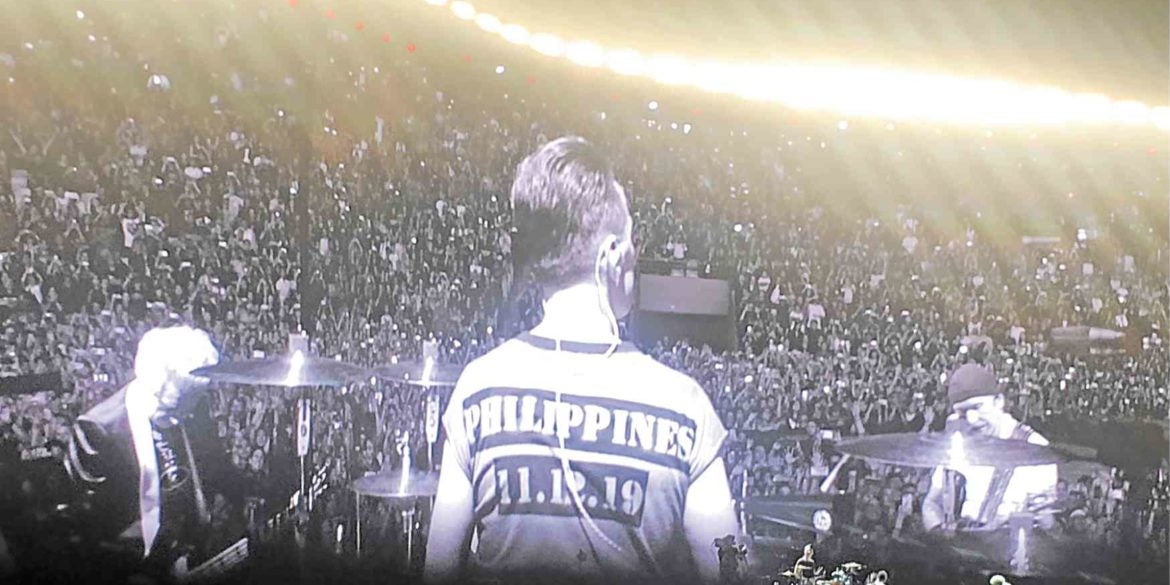 Something happened on the way to U2

On Dec. 10, the night before the U2 concert, I was in the office winding up work when a friend, Jing Garcia, messaged me to get down fast to Agimat, a bar in Poblacion, Makati: “Andito sila.”

“Sila” meant U2. In no time I was at Agimat, and Jing pointed to the table where U2 guitarist The Edge was, with a group that included chef Margarita Fores, her sister Bledes, and American chef Mario Batali. The Edge was drinking Joe’s Brew, a local craft beer.

The day before, in her Grace Park restaurant at Rockwell, Makati, Fores prepared dinner for U2 frontman Bono, Edge and three companions, including Batali.

At Agimat, people looked relaxed, content to steal glances at Edge, though probably all of them were just waiting for their chance for a selfie with the Irish musician whose guitar-playing style defines the U2 sound.

I managed to take phone camera shots of Edge who was about 10 feet away.

In a casual manner, Agimat business partner Jun Sabayton approached Edge to introduce himself. When I saw Jun leading Edge toward Jing and me, that was the cue to meet the rock star.

He was friendly, had an easy smile and a warm handshake.

Filmmaker Quark Henares had a few precious moments talking shop with Edge. “He asked for my card!” Quark would later post on Facebook.

Ok, let’s do the photos, Edge said, and suddenly there was a line of fans holding, aside from phone cameras, their own U2 vinyl records for autograph.

I fished out my U2 concert ticket, had him sign it, and took a selfie with him.

In the crowd were writer Erwin Romulo, filmmaker Lyle Sacris, and The Dawn guitarist Sancho Sanchez, who also brought some of his U2 LPs.

The minutes seemed to drag on as more fans surrounded the Edge for selfies.

“You look fit, man!” I hollered amid the noise and commotion. He nodded and broke into a smile.

Shortly after he left, the Agimat speakers blasted out U2 songs as the crowd cheered, raised their glasses, and processed what just happened.

On concert day, many people left Manila in the morning to get to Bocaue early, even if it meant hanging out for eight hours in the vicinity before showtime.

Others endured two hours of slow-moving traffic to get to the venue. Parking was difficult for those who arrived in the evening.

The lines at food stalls were long, and friends said some of the choices, like laksa, were a bit off for a rock concert.

But the mood was festive— common folk as well as celebrities and other famous figures greeting friends and acquaintances with excitement. Curiously, the audience comprised a varied demographic that included twentysomethings—kids of U2’s middle-aged fans.

On the super-wide video screen atop the stage, poetry lines rolled up. I caught a piece by US-based Eric Gamalinda, who later posted on Facebook that he was surprised to be informed by his sister about it.

Another surprise: Neil Young’s 1979 punk homage “My My, Hey Hey (Into the Black)” playing as house music.

And still another surprise: U2 drummer Larry Mullen Jr.’s T-shirt with “Philippines: 11-12-19” splashed on its back, as he flashed the peace sign while looking at the video camera that faced the crowd.

Getting out of the venue after the show took hours given the sheer volume of vehicles.

Nevertheless, the concert was, to quote a U2 album, an “unforgettable fire” that lit up the air similar to a spiritual and a psychedelic experience. The political stance was expected from a socially conscious band.

With the crowd estimated at 45,000, it was, by far, the biggest concert by a foreign artist in the country since The Beatles at the Rizal Memorial Stadium in 1966.