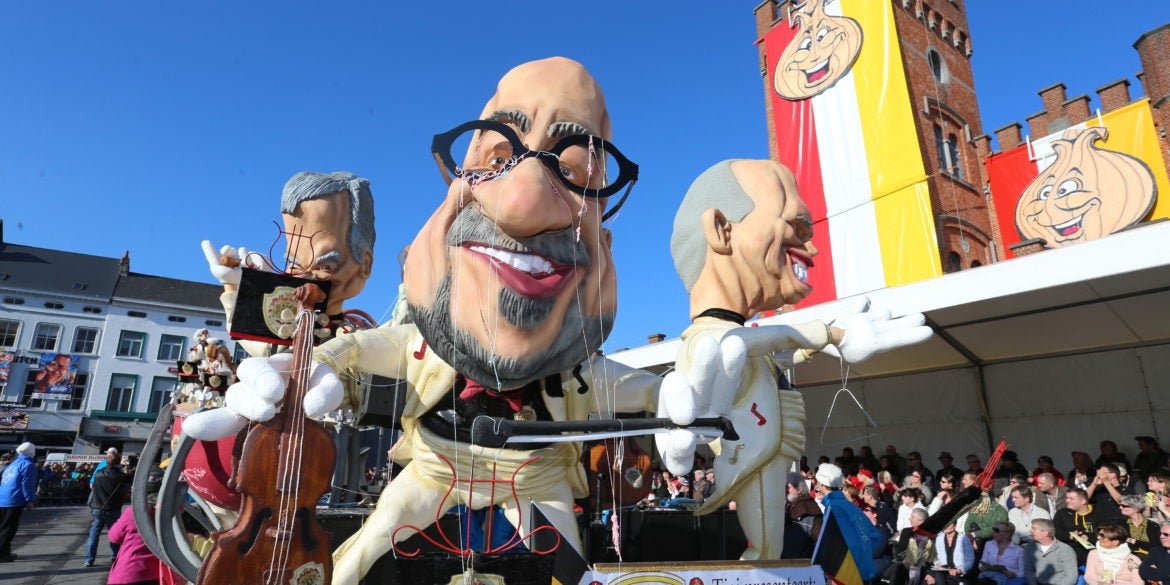 (FILES) In this file photo taken on February 15, 2015 a carnival float carrying a giant caricature of Belgian Prime Minister Charles Michel passes by the audience during the 87th edition of the carnival parade in the streets of Aalst. - The Belgian city of Aalst near the capital Brussels has pulled its annual carnival from the UNESCO world heritage list, after an uproar from Jewish groups and the EU, the mayor said on on December 1, 2019. The row erupted in March after Mayor Christoph D'Haese defended a deliberately anti-Semitic carnival float depicting puppets of hook-nosed Orthodox Jews with rats sitting on money bags. The carnival attracts tens of thousands of people over the three days leading to the Catholic holiday of Ash Wednesday and the start of Lent. It takes pride in its no-holds barred sense of humour and provocation. (Photo by NICOLAS MAETERLINCK / BELGA / AFP)

He also urged the Belgian government to clamp down on the Aalst carnival in the country’s Flemish-speaking region, which in March included a float caricaturing Orthodox Jews with hooked noses sitting on bags of gold.

“I welcome the moral and principled decision to remove the Aalst Carnival from UNESCO’s List of the Intangible Cultural Heritage of Humanity,” Katz said in an English-language statement.

“In the 21st century, during a time when anti-semitism is once again rearing its ugly head, there cannot be any tolerance for this ugly phenomenon,” he wrote.

“We expect the Belgian government to come out clearly and concisely against the inclusion of antisemitic displays in the carnival.”

The carnival was added to the UN cultural body’s heritage list in 2010 but was removed Friday at a UNESCO meeting in the Colombian capital Bogota.

“UNESCO is faithful to its founding principles of dignity, equality and mutual respect among peoples and condemns all forms of racism, anti-Semitism and xenophobia,” it said in a statement announcing the decision.

Cover image: In this file photo taken on February 15, 2015 a carnival float carrying a giant caricature of Belgian Prime Minister Charles Michel passes by the audience during the 87th edition of the carnival parade in the streets of Aalst. (Photo by Nicolas Maeterlinck/ BELGA / AFP)