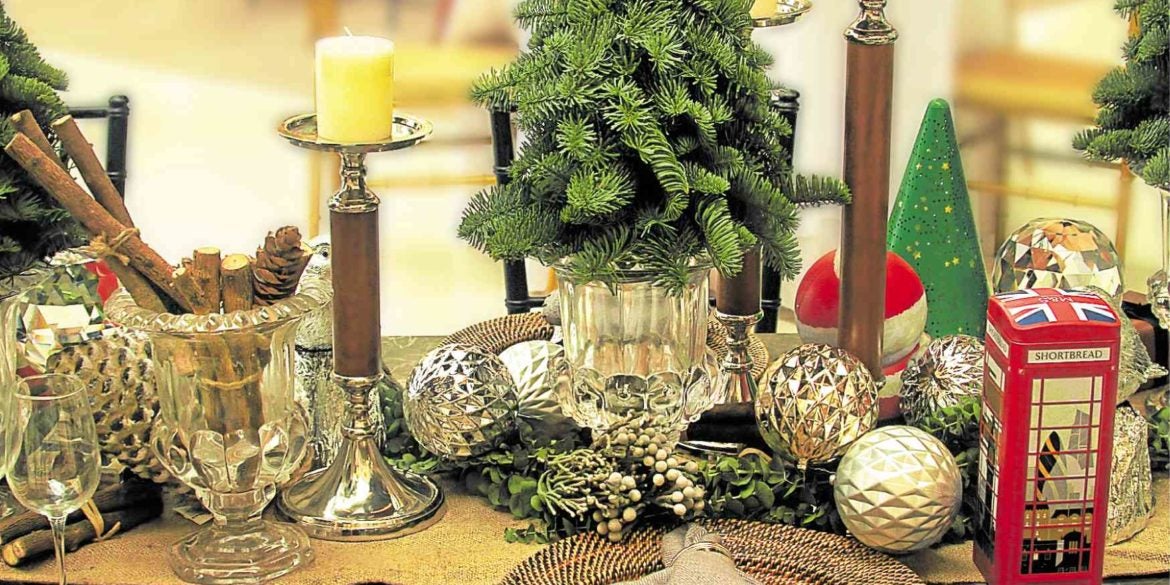 Christmas for the glitterati is about family traditions, good taste and Filipiniana.

Arts patroness Sofia Zobel Elizalde loves the local things that she has grown up with.

The Noche Buena table is elegant with heirloom piña tablecloth from her mother. Vases in various styles filled with her favorite flowers, candles, little sweets and chocolates line the table.

Colorful Christmas crackers recall the days when her father, Jaime Zobel de Ayala, was Ambassador to the Court of St. James in London. Capiz stars and balls in soft hues adorn the garden.

Actor Derek Ramsay, 43, said he still believes in Santa Claus. Every Christmas Eve at his parents’ home in Tagaytay, they leave milk and cookies for Santa by the tree. The Ramsay siblings open their gifts from Santa, aside from the gifts from their parents.

Dec. 25 is the only day of the year when rice is taboo. Ramsay’s British father cooks a typical Christmas English lunch— lamb, turkey, ham, a variety of potatoes and pudding.

Dr. Aivee Teo, president and medical director of The Aivee Group chain of aesthetic clinics, said her clan meets at the home of her mother, Las Piñas Mayor Imelda Aguilar, to celebrate a Filipino Christmas.

But Teo prefers to present various Christmas themes in her clinics and homes, not necessarily Philippine-inspired. While her Makati home boasts metallic hues, her Singapore residence has a white Christmas. “We change the theme every year, so the kids have something to look forward to,” said Teo.

The traditions and sentiments of these celebrities are interpreted in “Stylescapes,” a series of exhibits of holiday table settings in Ayala Malls.

“We invited designers and personalities to inspire everyone in how to set up their Christmas table, how to decorate the home and make use of materials which they can buy and put together,” said Jennylle Tupaz, president of Ayala Malls Inc., during the launch at the newly renovated Glorietta Activity Center.

Elizalde said that every year, her protégés from Steps Dance Studio—of which she is founder and managing director—make the rounds of Ayala Malls during the Christmas season to showcase Filipino artistry.

The mall-wide tradition was initiated by her father, who created “Bravo Filipino,” a series of performances that showcases Filipino excellence for free.

This year, Steps’ touring concert, titled “Halu-Halong Pasko,” is a medley of Filipino traditional songs given a pop-ethnic treatment by singer-songwriter Joey Ayala and choreographed by James Laforteza.

When Ayala Malls asked Elizalde to collaborate with stylist Zenas Pineda for the Christmas showcase, she decided that the treatment of main table setting and vignettes should be “Filipino with a modern twist,” as in “Halu-Halong Pasko.”

An independent artist, Pineda is a former interior designer, visual merchandiser at Rustan’s and floral designer and events stylist at Rustan’s Flower Shop.

The Christmas tree displays the colors of the native “halo-halo dessert—red from the kaong, green from the agar-agar, golden yellow hues from the leche flan, and blue from the ube.”

Elizalde’s table reflects her family’s appreciation for local artisan products. As a nod to Steps’ first mall show, a Filipino version of “The Nutcracker,” varicolored pabalat, the intricately cut pastillas wrappers from Bulacan, adorn the plates lined with colored mother-of-pearl chargers. The spirited tropical patterns of a mango chocolate box add to the visual impact.

At Glorietta, the Ramsay-inspired vignette reveals the actor’s roots. Nobilis pine trees, eucalyptus, pine cones and cinnamon barks on glasses echo the atmosphere of his parents’ home in Tagaytay. The silver birds represent the birds that chirp from his mother’s garden.

The nature décor is contrasted by the British elements—shortbread in boxes with the Union Jack design and a black leather tray with a matching shaker, flask and ice bucket.

“There should be grapes here because we believe that the more grapes you eat, the more success in the following year,” said Ramsay with a grin.

Pineda also interpreted Ayala Cebu’s Spanish colonial theme by using capiz balls and piña runners and napkins whose patterns matched the Lennox plates. The color theme of beige and crème is based on piña. Since a neutral story can be flat, Pineda intersperses gold accents for sparkle.

The “Alice in Wonderland” theme of Ayala TriNoma highlights mismatched prints on napkins, teacups and pretty boxes that serve as risers.

Pineda’s interpretation of the forthcoming Greenbelt exhibit, which highlights the 2020 design forecast, focuses on nature forms. A wreath of pine branches and blue hydrangeas is the focal point. A vine cascades down to the floor for drama.

Although Pineda’s vignettes are multilayered for a mall exhibit, her personal style is classic.

“My philosophy is to keep things simple by focusing on one element,” she said. “I highlight greenery and combine them with silver or metallics. Timeless décor for me is the use of fresh foliage, flowers, basic colors and inserting a surprise element, like mixing a woven tikog (local rush) plate with silver.”

At her home, Pineda’s signature plant-infused table settings are composed of pine sprays, native berries, achuete flowers, podocarpus leaves and flowers from the garden. She also likes to play with elements in varying heights for a striking design.

In contrast, stylist Gideon Hermosa has been famous for his maximalist style. Working with Teo for ATC, he was tasked to inject a winter mood to the “Alice in Wonderland” theme.

“Because Christmas is for kids, I wanted something magical and whimsical,” said Teo.

Of his aesthetics, Hermosa explained that despite the paraphernalia overload, he pulls them together by sticking to three colors. The dramatic transformation of the venue is another Hermosa signature.

At TriNoma, the floor resembles the giant chessboard in Alice’s “Through the Looking Glass” world. For drama in scale, a white tree with canopied branches glowing with lights hovers over the space.

Giant mushrooms and flowers inspired by the movie “Alice in Wonderland” are made of Styrofoam. Mall-goers can sit in giant resin teacups from the “Mad Tea Party” or pose inside the humongous picture frames. The focal point is the table setting with different types of teacups and teapots in white with gold or silver rims.

“Since we are both interior designers, we will be doing setups for the home,” said Fernandez.

“Since Tessa loves life, we will be playing with print on print,” said Fernandez, “colors and tactile textures such as bouclé and velvet, the forecast for 2020. We both love to entertain so the table setting will be eclectic but glamorous.”