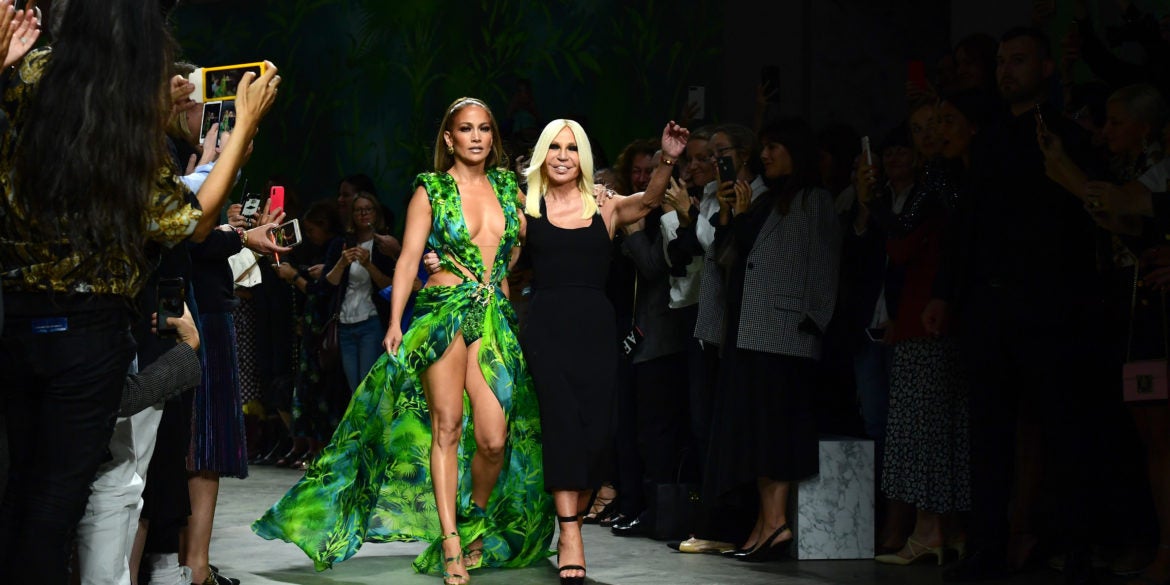 We continue to count down the days to 2020 with ’20 Before 2020′: a series of stories and listicles in celebration of 2019 and in anticipation of 2020. We take a look back at trends we loved, the moments that made us click “Share” and the other newsmakers that kept our group chats buzzing.

Roundups wouldn’t be complete without some of our favorite fashion moments — from the best red carpet looks to surprising runway moments. Keep scrolling for a visual treat!

Leave it to Lady Gaga to make quite an entrance at the annual Met Gala — with four live outfit changes, no less! The singer and Met Gala co-host started with a huge hot pink Brandon Maxwell gown and ended her red carpet moment in her bra, fishnets, and underwear while pulling a hot pink wagon full of rosé.

For her latest movie Fast 9 (from the Fast and Furios series), Charlize Theron surprised everyone with a chic bowl haircut, reminding everyone just how much of a badass she is. The edgy hairdo created by hairstylist Adir Abergel caused quite a stir, inspiring many to follow suit.

Dame Helen Mirren’s entrance at the Catherine the Great premiere

Dame Helen Mirren certainly raised the bar as epic entrances go when she arrived in a litter vehicle at the UK première of her HBO series Catherine the Great.

Dressed in a Ralph & Russo Couture frock, actress Selma Blair bravely made her first public appearance after announcing her MS diagnosis. In an Instagram post from that evening, she said, “There are moments that define us. This is one of those indelibly watermarked in my heart.”

In a sleek suit adorned with safety pins, 17-year-old model Damian Hurley paid homage to his mother Elizabeth Hurley‘s famous Versace pin dress at the launch of PatMcGrath Labs at Selfridges in London. Kaia Gerber also channeled her supermodel mom’s look during her 18th birthday when she wore a bustier dress similar to Cindy Crawford’s iconic Versace dress at the MTV Video Music Awards in 1992.

Katie Holmes is back in the fashion spotlight thanks to her chic street style looks. One of which is her effortless ensemble of an oatmeal-colored knit bra under a matching sweater from Khaite. The look has since been dubbed the “bradigan.”

Jennifer Lopez in her iconic dress at Versace

Jennifer Lopez surprised everyone at Milan Fashion Week when she walked for Versace in none other than her iconic skin-baring tropical-print green Versace gown from the 2000s Grammys.

Actress Penelope Cruz made her Chanel runway debut in honor of the late designer Karl Lagerfeld. Along with Lagerfeld’s other muses, Cruz walked the runway down the snow-covered set at the Grand Palais for Chanel’s Fall 2019 show.

At Paris Fashion Week, Zendaya debuted her Tommy Hilfiger collection with ’70s-inspired pieces modeled by the likes of iconic model and singer Grace Jones, Pat Cleveland, and other women rocking the hairstyles of the era. In a gold bodysuit and metallic jacket, Jones (at 70 years old!), danced her way down the stage — clearly, she stole the show!

Three months Karl Lagerfeld’s death, his spirit continues to live on at Chanel as the renowned fashion house transformed the Grand Palais in Paris into a Belle Époque railway station for Virginia Viard’s first collection, marking a new era for Chanel.

Marc Jacobs closed New York Fashion Week on a high note with a dreamlike ode to fashion from different eras staged at the Park Avenue Armory. The show featured a dazzling variety of colors, styles, and sartorial references — you name it, Marc Jacobs probably had it. Jacobs also addressed the fact that the day was 9/11 saying,“This show, like that show is a celebration of life, joy, equality, individuality, optimism, happiness, indulgence, dreams, and a future unwritten as we continue to learn from the history of fashion.”

Rihanna’s highly-anticipated 2019 Savage X Fenty show, which also premiered on Amazon Prime Video come midnight, was clearly about what women want instead of what men want. Her collection was in celebration of women’s bodies and sexuality as there were women of all sizes, races, and ethnicities among others. The show also included supermodels like Gigi and Bella Hadid and Cara Delevingne, celebrities like Laverne Cox and Normani as well as performances by Rihanna herself, Halsey, Migos, Big Sean, and A$AP Ferg.

Barry Manilow made a surprise appearance at New York Fashion Week on Wednesday morning (Feb. 13), closing out Michael Kors’ Fall 2019 show with a glittering rendition of his hit “Copacabana.” The disco-themed show included the likes of Bella Hadid and’70s supermodel Patti Hansen, and looks that were reminiscent of Studio 54.

Guests watched in awe as models got dressed on the runway, with their frocks hovering above them at Issey Miyake’s Spring/Summer 2020 show. As models bounced their way across the show area, so did their colorful dresses. They danced and pranced around in parachute pieces, playful hats, and fringed bags that made a good case for movement and fluidity.

From his explosive ‘La Bomba’ collection in 2018 to the teeny tiny bags called “Le Mini Chiquito”that took the fashion world by storm (and launched a thousand memes) in 2019, Simon Porte Jacquemus is clearly on a roll.

Makeup artist Pat McGrath is known for creating some of the most covetable and fantastical looks. For Valentino’s Spring 2019 Couture show, she created larger-than-life eyelash accessories that daintily fluttered as models walked down the runway in equally captivating gowns. The show was so beautiful that Pierpaolo Piccioli’s collection — which also had Naomi Campbell to close it — brought guests (even Celine Dion) to tears.