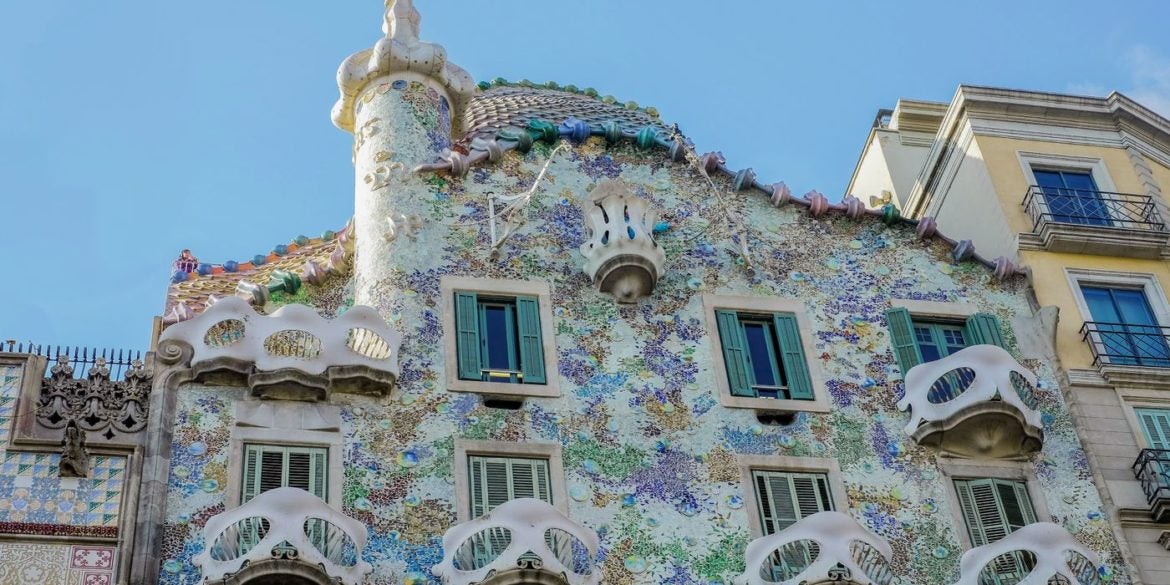 It is impossible to think about Barcelona’s cityscape without thinking about Antoni Gaudi. One of the Catalan region’s most famed sons, his creative eye and architectural prowess earned him an enduring legacy that is most widely felt across the city of Barcelona. When looking at one of his buildings, you can feel his passion not only for architecture but also for the beauty of nature and his staunch Roman Catholic faith.

Between 1984 and 2005, seven of his greatest buildings were collectively declared a UNESCO World Heritage Site called the Work of Antoni Gaudi. Today’s article will take you on a historical journey through these places, allowing you to understand their beauty and cultural significance

Casa Vicens has the distinction of being the very first house that Gaudi ever designed, commissioned straight after his time in school at the Barcelona Higher School of Architecture. In its architecture, we can already see his desire to break from the norms of the time, through the heavy Mudejar or Moorish influence and neo-modernist construction. The cheerful color palette and liberal use of checkered patterns make it stand out from its more traditional neighbors, with its interior being liberally decorated with natural figures, sculptures, and paintings as is typical of a Gaudi home. Today it exists as a museum, open for all visitors to understand Gaudi’s origins and influence.

The Palau or Palacio Guell is the second of Gaudi’s most significantly designed homes. Far more ostentatious than the Casa Vicens, it was designed with the intent of catering to high society with its ornately decorated receiving room and faux-starlit interior for parties. It is in this place we can see Gaudi’s turn towards innovation and ingenuity, which paved the way towards his truly unique architectural style. Palau Guell is now also a museum, inviting guests to marvel at Gaudi’s interplay of space and light within its palatial wall.

The Park Guell is a sprawling ode to nature and modern creativity that was originally a failed housing site, inspired by English garden cities. When Gaudi first began work on the housing site, he and Count Guell wanted to create high-quality and technological homes surrounded by the beauty of nature, formed in the style of the Greek Temple of Apollo at Delphi. This is carried across in the Park’s numerous spires and columns reinterpreted through a modern lens into softer shapes, as well as extensive use of mosaic tiling and the signature sprawling staircases. It is open to all visitors as a municipal garden, so they can wander through a slice of nature’s beauty.

Colloquially nicknamed the Casa Del Ossos (House of Bones) for its skeletal structure and organic qualities, the Casa Batllo is considered one of Gaudi’s finest masterpieces. It is adorned with colorful structures, like a dragon’s scales, making further use of Gaudi’s now-signature mosaic tiling to bring even more vibrancy to the house. The overall architecture encompasses the strongest signature techniques of Gaudi’s style including Moorish influence and non-Euclidean shapes. Casa Batllo is now a Modernist museum, much like the other buildings on this list.

Casa Mila is more popularly known as La Pedrera, or The Stone Quarry, for its rough-hewn appearance. Eschewing the conventions of typical structure with its stone facade that cascades from the house in ripples, it was actually quite controversial during its time, more so than any other Gaudi building. Even so, it stands testament as one of Gaudi’s most unique words, bearing a rooftop lined with fully functional chimneys of glass and broken marble as well as patios that also served to bear the weight of the rest of the building. Currently, it is the headquarters of the Fundacio Catalunya La Pedrera, who organize events and exhibitions related to Gaudi.

The Church of Colonia Guell is one of Gaudi’s two most famous unfinished works, with the only portion complete within the church being its crypt. Another project of Count Guell, this was commissioned as a place of worship, with its unfinished chapel echoing what would eventually be the interior of the Sagrada Familia. The crypt itself boasts curvature so unique at the time that they were the origin of new architectural vocabulary, specifically that of hyperboloids. You can visit the Colonia Guell by heading thirty minutes outside of Barcelona, where it is open to the public.

Talking about Gaudi is impossible without mentioning the Sagrada Familia. Famously still under construction up until today, Gaudi first took over as its architect in 1883 with the intent of creating what would be one of, if not the most, the greatest cathedrals in the world. Its original plan involved eighteen spires to invoke eighteen important figures within the New Testament, as well as three grand facades to invoke the Nativity, Passion of Christ, and the Glory of the Lord. While Gaudi himself rests in the crypts beneath the building, his legacy has been handed over to a series of architects carefully chosen to bring his designs to life. However, even without the man around to oversee its completion, the visionary’s presence lingers throughout the building in his signature hyperboloids, myriad influences and near organic structures. As a statue of Saint George watches over the Sagrada Familia from his perch inside the cathedral, it is as if it carries the hopes and dreams of the people of Catalan to see this great structure finally completed.