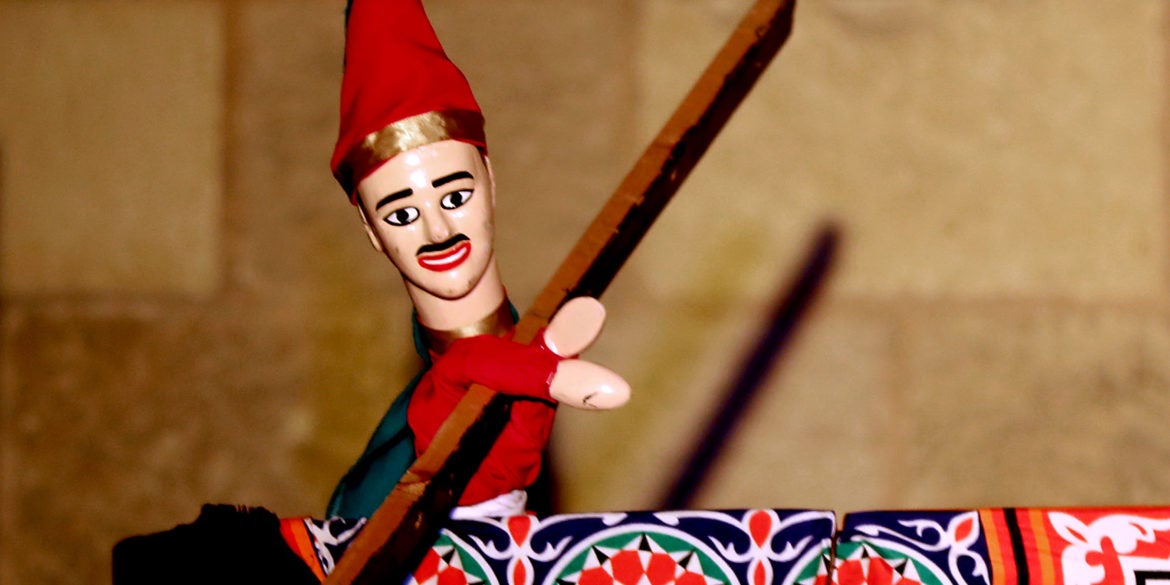 A wooden puppet from Egypt's Aragoz puppets show performs in Beit al-Sehemi, in Cairo's Gamaliya district, on November 15, 2019. - At a historic Islamic Cairo complex, a swarm of spectators scurried for seats to watch Egypt's Aragoz puppet show played by Wamda troupe, the only group striving to save the traditional folk theatre. "Come out, Aragoz," the audience shouted in unison as they impatiently waited for the adored satirical hero, recognised last year as an intangible cultural heritage by the UNESCO, to appear. (Photo by Mohamed el-Shahed / AFP)

In an era of on-screen entertainment,a simple glove puppet named Aragoz still lures Egyptian audiences with comic sketches showing how wits and skill can defeat the thuggish and corrupt.

Recounting stories with a thought-provoking moral in their tale, puppeteers evoke peels of laughter from spectators, mainly children, as they enact Aragoz’s exploits, some of which date back centuries to Ottoman times.

“I fell in love with Aragoz as I grew up. Everyone loves it actually,” said Sabry Metawly, one of a diminishing band of veteran puppeteers still putting on performances of Egypt’s most adored folk figure.

“It has clicked with the people because it represents them. It succeeds where they cannot by challenging and winning against rivals.”

The squeaky-voiced puppet, with a wooden head, red conical hat, thin painted moustache and a bright red cloth cloak, was recognised by UNESCO in 2018 as part of the planet’s intangible cultural heritage.

“Aragoz humorously criticises the actions of the powerful and resists the corrupt during the plays,” said Nabil Bahgat, founder of the Wamda troupe, of which Metawly is also a member.

“But it does not target specific figures of current politics or leaders.”

Outspoken, mocking, stubborn and often vulgar, the Aragoz character has long been viewed as a reflection of popular Egyptian society.

The troupe — which comprises only six members — has been drawing weekly audiences for more than a decade at the Ottoman-era Beit al-Sehimi building in Cairo.

But it has not faced any censorship despite the ongoing crackdown on freedom of expression since President Abdel Fattah al-Sisi took power in 2014.

Tales as old as time

Like his father before him, Metawly performs from behind a portable box-like booth moving two puppets, one on each hand.

He has been working as a puppeteer for more than 50 years, following in his father’s footsteps.

He learned the stories — which are passed down orally — by watching his father perform in the streets and at rural festivals and Muslim celebrations.

By 2003 when Bahgat formed Wamda he had managed to collect 19 plays orally and commit them to paper.

All the Aragoz sketches, still performed today, are part of the country’s cultural heritage, passed down from one generation of performers to the next, without being properly documented, he said.

“All plays are authorless,” Bahgat added.

“Practitioners were in the habit of learning them by heart from their predecessors and passing them on to the new generations,” he said.

None of the plays can be traced to a certain time or specific person, said troupe member Mahmoud Sayed.

In them, Aragoz is often pitted against other puppets resembling an Ottoman-era policeman, a sheikh or a bully, and gets into comical verbal sparring matches sprinkled with clever puns.

In one sketch, Aragoz argues with a bully dubbed the fetewa, a term used to describe powerful men who ran local neighbourhoods outside the law.

“What do you want?” Aragoz asks after a long banter, with the bully immediately replying he wants a fight to see who is the most powerful.

“Whoever wins gets the support of this audience,” says the fetewa.

Aragoz immediately pounces on the bully dealing him a flurry of blows. He wins the scuffle after three rounds, and kicks his opponent off the box.

“Get out!” shouts Aragoz, to huge cheers and applause.

Metawly always feared the art form would disappear, as veteran puppeteers dwindled in numbers and digital advancement took over entertainment.

Some trace it back to the Fatimid dynasty from the 10th to 12th centuries, and others say it particularly flourished when the Ottomans took over Egypt from the 16th century.

The origins of the name Aragoz is also a subject of debate.

Some argue that it was inspired by the Ottoman-era shadow theatre form known as Karagoz. Others say it dates back to the Pharaohs, said Sayed.

But practitioners have preserved its intrinsic features, including the puppet’s unique squeaky high-pitched voice created by a swazzle the puppeteers hold in their mouths.

Over the decades, Aragoz has also become a more general insult for a clown.

Pro-government media often use the term to refer to supporters of the outlawed Muslim Brotherhood group.

And it was used to denounce popular Egyptian satirist and talk show host Bassem Youssef, who shot to fame for poking fun at government figures during his late night political satire show, following the popular 2011 uprising.

“People nowadays diminish the term Aragoz to whatever they deem as silly or generally bad,” said Bahgat. “This just shows how little respect we have for our own culture.”

In October, Egypt’s most famous veteran puppeteer Mostafa Othman died at the age of 80.

“We have pushed for a long time to preserve this heritage,” said Bahgat. “We have done our part. It is now time for people to step up and preserve their culture.”