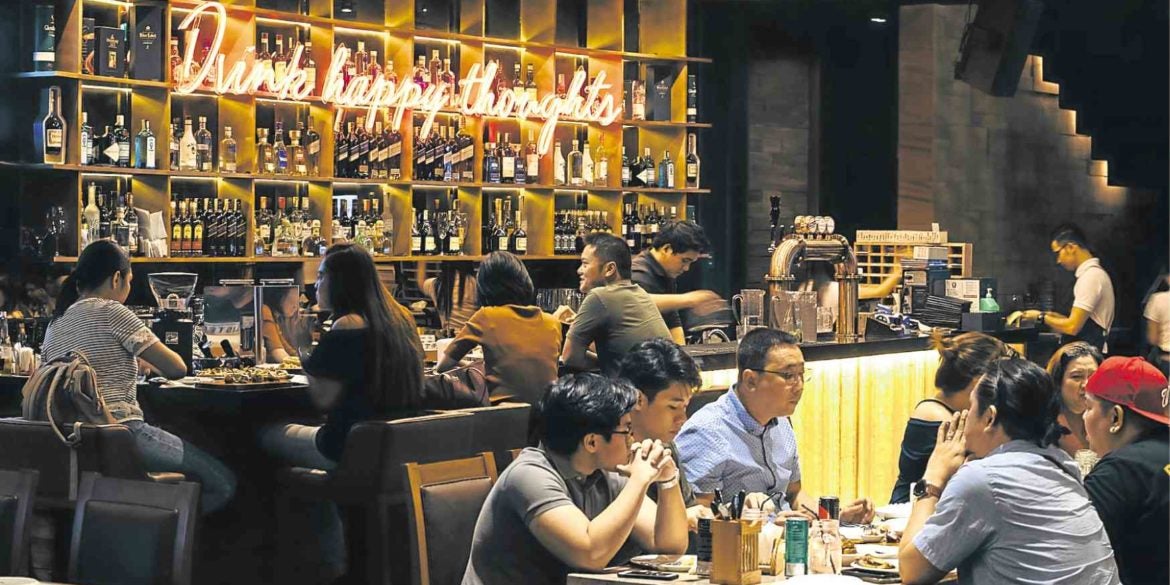 It’s very tricky to listen to everyone. You can’t please everyone,” said chef Rainier Barbers about running the kitchen of gastropub Tipsy Pig for five years now—and counting.

His guarded reserve was a stark contrast to the pulsating ambience of Tipsy Pig’s third and newest branch along Timog Avenue in Quezon City. His display of modesty was a tad ironic. After all, had not Tipsy Pig generally “pleased everyone,” from the time it opened its first branch in Kapitolyo in 2013?

Over the years, Tipsy Pig has not only carved for itself a niche in the industry; it has somehow led the local gastropub movement. With its slew of rich, flavorful dinner-to-bar chow specialties as well as extensive drinks menu, Tipsy Pig keeps its guests glued to their tables well after midnight.

In fact, a colleague from Singapore went straight to Tipsy Pig upon arriving in Manila without anyone telling him to. Great reviews, a convenient location and salted caramel beer lured him to place, he said. And of course, he added that Tipsy Pig’s food did not disappoint.

How bestsellers are made

“I think the strength of Tipsy Pig, why we were able to establish identity, is because our food is good for sharing,” Barbers said. “It’s known not only as a bar. Its food items are bestsellers too.”

The chef explained the achievement was made through several menu revisions—eight over the course of five years, to be exact. And in figuring out which menu changes had to be made, Barbers always turned to numbers.

“The numbers will speak for themselves,” Barbers said.

He added he tends to pay more attention to what doesn’t sell because these are the food items they need to tweak or remove from the menu altogether. Naturally, menu entries that are easily sold out garner a much-coveted spot on the mainstay list.

This process of deciding which offerings stay and which go might have resulted in booting out a few outliers that catered to acquired taste. Ultimately democracy is perhaps, where the success of Tipsy Pig lies—all these years, it listens to the discerning tastes of loyal customers.

In return, Tipsy Pig remained steadfast in its vision, which was to change the notion of going out.

“I believe that food doesn’t have to be complicated,” Barbers noted. This, coming from a chef who interned years ago in no less than 58 Tour Eiffel, the beloved restaurant that lets you dine atop Paris’ Eiffel Tower.

And so Barbers and his partners made sure that like their food, Tipsy Pig stood as a beacon to everyone looking for somewhere to hang out, to dine, to grab a few drinks any day of the week. They made sure that through Tipsy Pig, people felt going out didn’t have to be complicated either. It’s a place to be with friends and family.

One thing you should know about the new branch in Timog is that at night, it gets really packed and pumping. While the interiors still bring to mind its predecessors in Pasig and Taguig, this Tipsy Pig underwent a facelift reminiscent of those hip neon-lit pubs in Makati. It is, most likely, the space’s most Instagrammable spot: a neon sign above the bar that reminds guests to “Drink happy thoughts.”

As for the menu, guests can still count on fail-safe favorites: sisig tacos, crispy pata and sweet beer. But one of the new items on the menu (a sure must-try!) is the Pampano with Patis Butter and Mustasa Salad. There is much to be said about this dish. The use of local ingredients is laudable—its flavors and textures a testament to the kind of Filipino cooking we all love. The meat melts in your mouth and is accompanied by the crunch of crispy fish skin. Drizzled with the butter-and-patis sawsawan, it has a warm saltiness that settles nicely on the palate. The Mustasa side salad comes in handy every time the savory flavor becomes overwhelming.

Even the backstory of this dish is hinged on family, as chef Rain recounted with a chuckle, “My mom asked my why we never served a fish dish whole, eh ang sarap ng ulo.”

Other specialties that you should order on your first visit to the Timog branch are the Kesong Puti Pasta and the Seafood Kare-kare. Again, we see odes to Filipino cuisine, but there are other options that are just as delectable—from Hoisin Pizza to Squid Aglio Olio and Seoul Pork Belly.

Barbers and his partners remain unassuming.

“I face the reality that if you have 100 people eating, there are 20 who will say sakto lang.” But the minds behind Tipsy Pig take this in stride, because it is through a dependable menu and drinks list that they have made lasted, in or out of season.