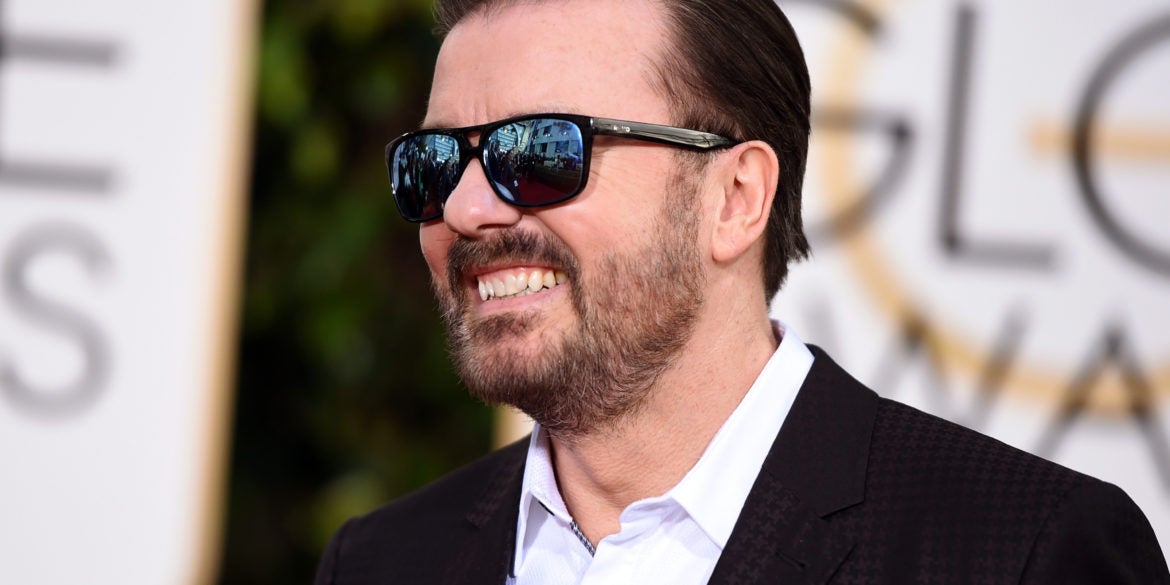 (FILES) In this file photo taken on January 10, 2016, host Ricky Gervais attends the 73rd Annual Golden Globe Awards in Beverly Hills, California. - "Shut up, you disgusting, pill-popping deviant scum!" Those were the words Gervais used to open the star-studded Golden Globes in 2016 -- the last time he hosted Hollywood's most free-wheeling award show. So A-listers in the audience will be on their guard Sunday, when the provocative British comic returns to oversee the boozy prize-giving gala for "the very last time." Gervais' no-holds-barred humor has drawn praise and criticism in previous years, with everyone from Caitlyn Jenner to Roman Polanski considered fair targets for his sharp barbs. (Photo by Jason Merritt / GETTY IMAGES NORTH AMERICA / AFP)

“You’ll be pleased to know this is the last time I’m hosting these awards, so I don’t care anymore.”

That was how Ricky Gervais, comedian and one-half of Seona Dancing, began what is probably the most scathing opening monologue to any awards show ever hosted. It was enough to make the Hollywood elite seated at the Beverly Hilton Hotel brace themselves. Sure enough, the magnitude of his lack of cares given was evident with every line. He riffed on as many major and minor grievances against the acting community as he possibly could, ranging from DiCaprio’s young girlfriends to the box office failure of Cats and even Felicity Huffman’s part in the college admissions scandal.

Most damning of all, however, were his criticisms towards that community as a whole. In his speech, he condemned Hollywood for supporting major corporations such as Apple and Amazon with notoriously bad workplaces, as well as making reference to the MeToo movement coming for most people in the room. However, Gervais’ most critical statement was directed at those actors who would use their win as a platform to discuss issues of political importance, since as he puts it award winners are “in no position to lecture about anything. You know nothing about the real world…so just “come up, accept your little award, thank your agent and your God, then f*** off, okay?” The fact that a not-present Russell Crowe’s speech then talked about the need for home viewers to assist in fighting Australia’s forest fires was more perfect comic timing than anyone could have scripted.

These are big words coming from Gervais, especially since he is not only quite vocal on Twitter but was also quite vocal on the podium. It also isn’t lost on this writer that he was quite hypocritical by discussing the politically inflammatory Jeffrey Epstein, Ronan Farrow, and even making his own plea on behalf of the Australian people to help stop the bushfires. Still, that disregard for his own rules marks him out as belonging to one of England’s oldest and most famous schools, one that has challenged traditional concepts of education and the limits of free speech. In short, he’s a UCL lad, through and through.

University College London, or UCL as it is now known, was first founded partially in protest of Oxford and Cambridge and partially inspired by philosopher Jeremy Bentham, who advocated for education for all. Those two schools allowed only white Anglican men to apply for further education, to which its founders replied by creating a school where any man regardless of race or creed could study. A school separated from religion and in fact entirely secular, with not a single religious minister on its council, it earned the moniker of “that Godless institution on Gower Street”.

With an idol like Bentham, it’s not surprising that UCL’s founders and Ricky Gervais were inspired to act against the grain. As a student of philosophy Gervais would’ve had to learn about Jeremy “Bezza’s” core tenets (whose padded-up skeleton is displayed on campus for public viewing) of a world founded on rational analysis, freedom of speech, and the existence of sinister interest — the idea that the powerful conspire against the interests of the people. His influence can be seen in Gervais’ disrespect for authority, belief in animal rights, and overall distaste for religion.

Listening to Gervais speak is like listening to any number of UCL’s more politically and socially active students, or even to any number of the teaching staff. There is a certain level of cynicism and anger that often seems to manifest at the school, but that in itself isn’t a bad thing. Strike action by students, faculty and outsourced workers in 2018 and 2019 saw these groups come together to protest worker outsourcing, teaching pensions, and generally poor labour conditions. UCL has produced revolutionaries in politics, medicine, the sciences and the arts. The common thread? People unhappy with a current system, and wanted to see it change.

Let’s be honest, Ricky Gervais is not perfect. Far from it. He’s often incredibly politically incorrect, challenging  authority in a way that is crass, bad-tempered, and has earned him many enemies. He’s often rude and aggressive, both online and throughout his body of work, with how much of that is celebrity persona and how much is his real nature unclear. When you ask about UCL’s alumni, most students would rather name Gandhi, Chris Martin or Christopher Nolan than Gervais. Nevertheless, he comes back again and again because terrible as he is, he finds ways to make us laugh.

At the end of the day like UCL itself, Ricky isn’t perfect but he is an institution (in comedy). Both UCL and Ricky are aging and sometimes hypocritical in the way they present themselves and the way they address those around them. Both have found themselves caught out for controversies, issues, and problematic associations. Ultimately, however, both are, one for its educational value and the other for his contributions to comedy. So let’s pour one out for Ricky Gervais, one of the godless apes from Gower Street.

Kyle Tinga is a transport planner, writer, and graduate of UCL. She earned a BSc in Urban Studies and MSc in Transport and City Planning, and is still a Catholic despite the school’s best efforts. You can find her on Twitter at @kyle_tinga, or on IG at kyletinga.