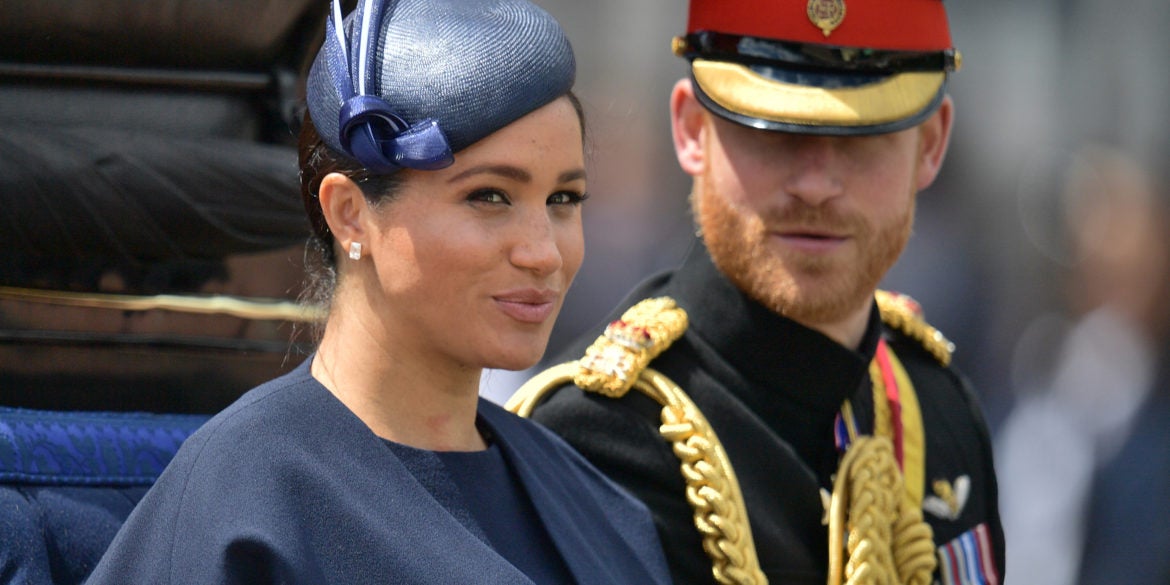 (FILES) In this file photo taken on June 08, 2019 Britain's Meghan, Duchess of Sussex (L) and Britain's Prince Harry, Duke of Sussex (R) return to Buckingham Palace after the Queen's Birthday Parade, 'Trooping the Colour', in London. - Britain's Queen Elizabeth II on January 13, 2020, said Prince Harry and his wife Meghan would be allowed to split their time between Britain and Canada while their future is finalised. The couple said last week they wanted to step back from the royal frontline, catching the family off guard and forcing the monarch to convene crisis talks about the pair's future roles. (Photo by Daniel LEAL-OLIVAS / AFP)

The Canadian government has yet to decide whether it will assume the security costs associated with Prince Harry and Meghan Markle’s decision to split their time between Canada and Britain, Prime Minister Justin Trudeau said Monday.

“I think that is part of the reflection that… needs to be had, and there are discussions going on,” Trudeau said in an interview with Canadian television channel Global.

“We’re not entirely sure what the final decisions will be, where the dispositions are and those are decisions for them,” he said.

Harry and Meghan caught the world off guard last week when they announced their intention to step back from frontline royal duties.

According to Trudeau, Canadians are “very supportive” of having the royal couple live in Canada, but there are still “lots of discussions to have.”

“We haven’t spent any time thinking about this issue,” said Canadian finance minister Bill Morneau, who was interviewed earlier Monday about British press reports that Trudeau had assured Queen Elizabeth II that Canada would cover security costs for Harry and Meghan.

“We obviously are always looking to make sure, as a member of the Commonwealth, we play a role,” Morneau said.

Canadian media have estimated that protecting the couple and their baby son Archie would cost about $1.3 million (Can$1.7 million) per year.

Canadian taxpayers have traditionally contributed towards security costs when members of the Royal Family visit the country.

Prince Harry and Meghan, formally known as the Duke and Duchess of Sussex, have said their official plan is to continue to “fully support” the queen and honour their duties to the Commonwealth and their patronages.

But they want to make 2020 a transition year to carve out their new role and launch their new Sussex Royal charitable entity and seek to raise their own sources of income.

On Monday, Queen Elizabeth II allowed her grandson Harry and Meghan to split their time between Canada and Britain.

But she frankly admitted that the couple’s decision was not welcome news.