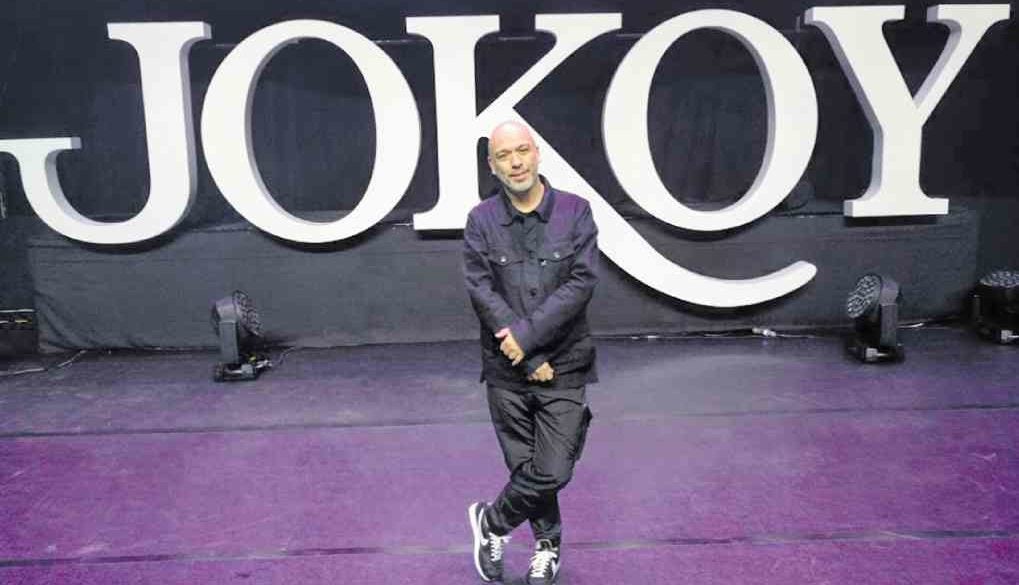 “Your life is about goals. When you reach your goals, you reach for another goal, you don’t just stop at one goal,” says Jo Koy.

The Fil-Am comedian, hailed by the New York Times, is a rock star in standup—filling MOA Arena to capacity

“I could never be alone. I don’t like to be in my house by myself. It’s either I get out or do something that makes my mind… It’s constantly thinking. I gotta do something, I gotta interact. I gotta let that energy come out,” the Filipino-American comedy star tells Lifestyle backstage, a few hours before doing his rollicking act to a full house at Mall of Asia (MOA) Arena Jan. 15.

The show, part of his Just Kidding World Tour, opened with a group of stand-up comedians and dancers with Filipino lineage.

Jokoy was so thrilled at the sight of almost 10,000 people in constant laughter that he kept the show running for almost two hours.

Tickets to the show were sold out within the day of the preselling, says Rhiza Pascua, CEO of MMI Live, the show’s promoter.

“It’s crazy, right?” Jo Koy says of the phenomenon—a standup comedian filling up a stadium and going on a world tour.

The New York Times cited Jo Koy’s 2019 Netflix special, “Comin’ in Hot,” as one of the “most interesting.”

“I always told myself I was gonna play big venues,” he says. “Your life is all about goals. When you reach your goals, you reach for another goal, you don’t just stop at one goal… I said (in an interview years ago) that I appreciate people who set high goals. If Kevin Hart can play arenas, then I can play arenas. There’s a lot of pressure, but here we are.”

Born Joseph Glenn Herbert on June 2, 1971 to an American father and Filipino mother in Tacoma, Washington—the nickname is a twist on how his aunt called him, “Jo ko” (“My Joe”)—Jo Koy recalls dreaming of becoming a standup comedian at age 11.

“I knew I was always funny, even when I was younger, at 8 years old,” he recounts. “And then I saw Eddie Murphy on TV. I knew what that world was, I fell in love with it. I couldn’t stop watching stand-up comedy. I shouldn’t have graduated in high school, I was bad, I was a class clown.”

In the early years, he performed in bars, coffeehouses, nightclubs (“Before they opened up to dancing, you told jokes on the dance floor”), colleges and restaurants.

The youngest of four siblings, he admits being inclined to R&amp;B music—his singing voice quite impressive in a segment during the MOA Arena show.

“My (eldest) sister Rowena was a singer, a professional lounge singer for 20 years until she got lupus,” he says.

Another sister, Gemma, works as his manager.

You’re now like a rock star of comedy, we tell him.

“Isn’t it crazy?,” he quips. “It’s fun! I love it, I have that connection with my audience now. And they’re coming three, four times. Now I have this responsibility to change it (my routine) up, cause I know, in the audience, even if there are 9,000 people tonight, I know there’s gonna be a couple of hundred who have seen me four times. So I play for them more than the others. I feel like I owe them. I gotta give them something new—or I lose them and they don’t come back.”

The mention of another Fil-Am comic, Rex Navarette, puts a smile on his face.

“Of course I’m aware of him,” says Jo Koy. “I didn’t know Rex until I got to LA. He was then making a name for himself. But those are two different roads—he has a certain road, and I have a certain path. My path is, I want to speak to the masses, not just to a specific group. I don’t want to be just targeting Filipinos.

“Even though I do a lot of stories about being Filipino, I do it in a way where you don’t have to be Filipino to get it. That was always my goal when I started doing comedy in 1989.”

He says he did “black comedy shows, Def Jam on the road, Latino shows, everything but Filipino. It was strategic, I guess, cause I felt like I could always play to a Filipino audience. To me, it was always easy to talk to Filipinos and make them laugh. But is it easy to make black people laugh? Can I tell them my story? I figured that out, so I put myself in that kind of environment just so I could get to where I’m at now.”

Is it true that comedians are moody people?

“I don’t think so. I think people are just moody people. I don’t know why we have that stereotype (of a comedian). I just know I’m crazy. I’m just out there,” he says, laughing.

He admits having difficulty sleeping early: “I stay up late. I’m always thinking. I try to find something funny. Even though I’m in a conversation with you, for some reason there’s a joke that forms, always, no matter what environment or situation I’m in. My brain always wants to think funny. It’s weird.”

How do you chill, we ask, like, do you drink?

“I don’t like to drink, I don’t crave for it,” he says. “But when I was recording myself doing stand-up, I was drinking all the time. I used to have a couple of beers onstage. Then I saw myself slurring. That was the last time I did it. I didn’t like the way I saw myself. So I don’t want people in the audience to look at me that way, like a drunk onstage. Cause what we are—it’s magic, what we’re doing.”

For downtime, he says he like to hang out with family: “I’m always around my son, my nieces and nephews—that’s my way of relaxing.”

You love Filipino food, as your mother Josie showed on YouTube, we tell him.

A lot of good things, in fact, are happening to Jo Koy.

He’s shot another special for Netflix. He says it’s a coming-home special featuring Filipino comedians from America coming home to the Philippines for the first time and performing before a Filipino audience with an all-Filipino crew recording it.

“I want to showcase their craft—and let the world see it,” he says. “The world is gonna see the Philippines on a different level. The world will see us laugh, sing, dance—how Filipinos are such a fun group of people.”

He adds that he’s working on a couple of movies.

Toward the end of the MOA Arena show, he called his teenage son, Joe, onstage. “I wanted him to see Manila, unfortunately we can’t. Taal Volcano went off. But I’ll make sure to bring Joe back to see how beautiful this country is.”

Speaking of Taal, Jo Koy says he plans to to bring awareness about the situation: “It needs help, so we’ll make sure I help people in this disaster.”