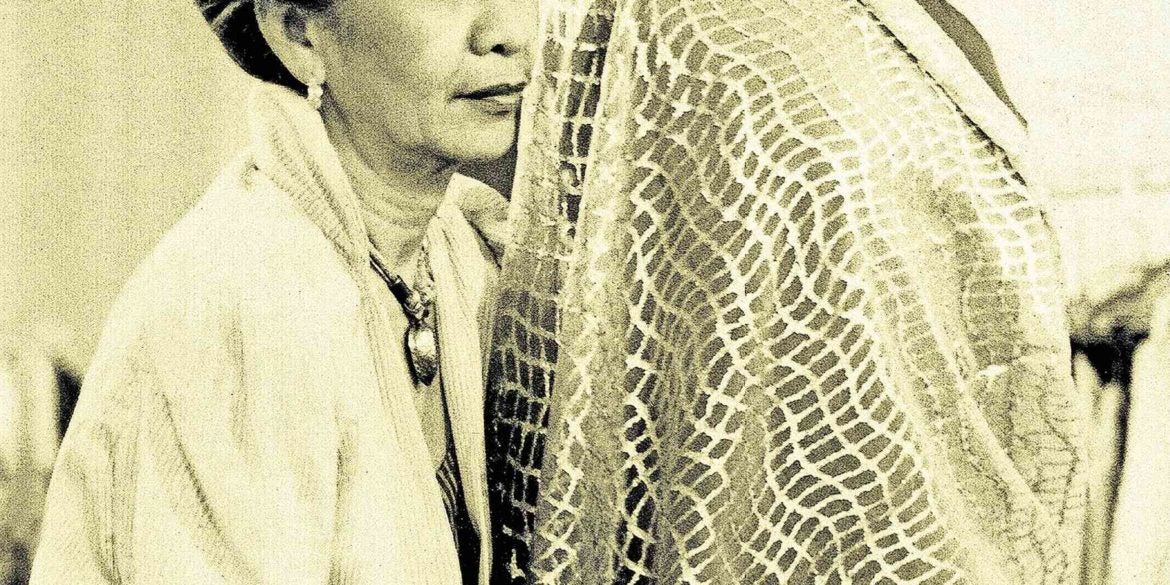 Her terno is now the national standard of design, and the school she founded is a major institution that’s produced top designers

It’s difficult to put Salvacion Lim Higgins’ body of work in a box.

In fashion, she’s known by her trade name, Slim, an acronym of her name, which is synonymous with Slim’s—the atelier she established in 1947 which eventually became a fashion institute.

To call her designs “contemporary” today, or even when they were first brought to light in the early years, one can’t simply say the works are relevant to the present, as their “today-ness” cuts across decades.

Nor can they be referred to as “modern,” as the designs are ahead even in the present.

Perhaps they can be referred to as “classics,” in the sense that Slim’s designs have an outstanding quality, but in a style that is typical of her unique workmanship. Call it “avant garde,” if you may. But to this day, her designs set no inclusive dates in that they are timeless.

Complexity and comfort were hallmarks of a design by Slim, whether featuring an asymmetrical pattern, helix cuts (intertwined spirals of fabric), geometry, or with a three-dimensional perspective.

But one thing was constant in her creations—the wearer could sit and stand without getting cramps.

Fashion design, in Slim’s glossary, was not all about assembling a pretty, wearable, crowd-pleasing frock, but rather, involving ingenious techniques and use of material that brought forth a dramatic vision, flattering to women, yet likewise comfortable.

On the second year of Ternocon, a national convention that heightens the awareness of one of the Philippines’ national costumes, the event pays tribute to the remarkable genius and artistic tenacity of Salvacion Lim Higgins, as it celebrates her centenary birth year.

Some ternos that she designed will be on exhibit Jan. 26 at Ternocon at the Cultural Center of the Philippines.

Born Jan. 28, 1920, she first entered the fashion scene through her atelier in 1947, armed with Fine Arts studies, mentored by Carlos “Botong” Francisco, with a natural eye for unusual color palettes, and a curious impetus for experimentation.

Altogether, it was a self-imposed liberal arts sense that proved to be her driving force.

The first 10 years of her career, 1947-1957, was the same decade that Christian Dior opened his own atelier and launched his “New Look,” a time fashion historians now refer to as the “Golden Age of Haute Couture.”

In a similar vein, Higgins’ work of that decade reflected the “golden age” of fashion in the Philippines—her extravagant silhouettes and the aesthetics of her designs elevating the terno to an haute couture garment.

In 1956, she created a complex, asymmetrical terno with an origami-like side pleat and crinkled draping, all held together by just one seam.

To quote Helena Benitez in 2008, Higgins “transformed the national costume into a work of art.”

The dress, which adorns the cover of the coffee-table book dedicated to her life’s work, is now part of the fashion collection of the Victoria and Albert Museum in London.

Another gown is also archived at the Smithsonian Institute in Washington DC— making her the only Filipino designer whose work is in two of the world’s most prestigious museums.

Since her untimely passing in 1990, it is a wonder that the same sensibility is present in the work on exhibit by students at the Slim’s Fashion and Arts School every school year.

The derring-do quality is present in the fearless experimentation with material and technique—painstaking loops of fabric that complete an ensemble, or the funky use of X-ray plates upcycled and patched together as vertebrae adorning the wearer’s back.

Every fashion era has sought to make the country’s fashion industry world-class. The contribution of Slim to realizing this goal was to work meticulously on institutionalizing a syllabus when she, with her sister, Purificacion, opened Slim’s Fashion and Art school in 1960.

The school’s syllabus, through the years (with a more recent update by Slim’s children, Mark and Sandra), has remained consistent in preserving the hallmarks of Slim’s process of design and execution.

Over 30,000 students, some of whose names resonate in the international fashion world, have kept alive her knowledge, experience and technical expertise embodied at Slim’s Fashion and Arts School, now the oldest fashion school in the country.

Thus, Higgins has left behind perhaps the greatest imprint in Philippine fashion. Through the school that bears her name, she has mentored generations of Filipino designers, and its vibrant, creative output will certainly continue beyond today.