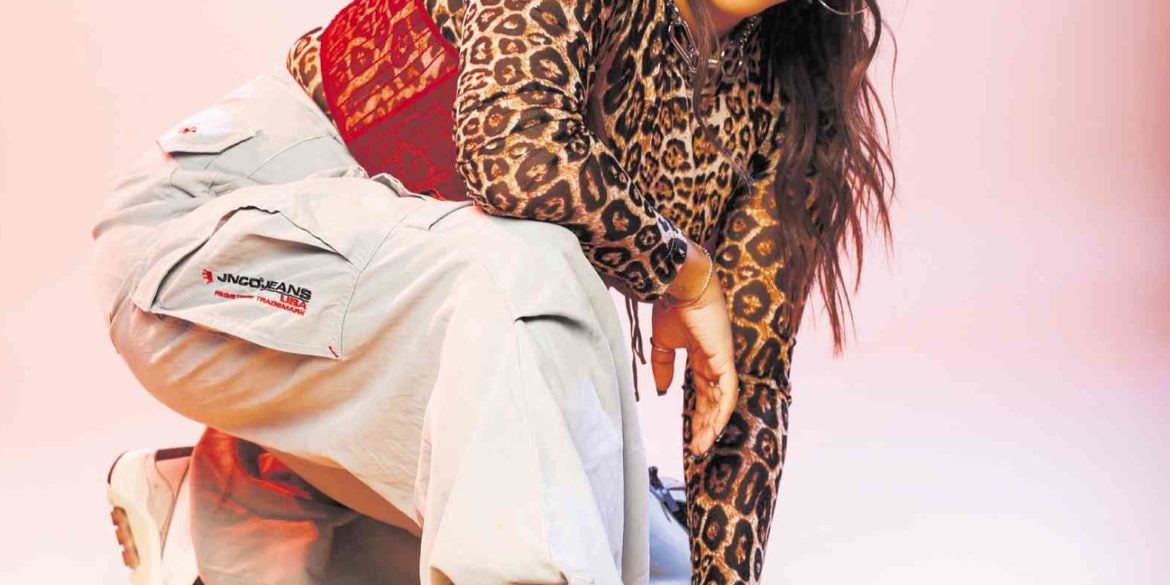 Her debut single and music video “Just My Type” depicts her obsession with the new boy in school, a football player. Kocher’s character stalks him at his practice with Fil-Am comedian Rob Schneider in a cameo role as the football coach. Just then, a tall water boy passes by the field and gets hit by a football.

Comedian Marlon Wayans appears as the music teacher. In the music practice, the football player suspects that Kocher has been eyeing him.

During the prom, the boys point Kocher’s crush to her character. Suddenly, the towering water boy, looking dapper in a pink blazer and white pants, asks the petite Kocher out. The couple leaves the prom riding in a DMC DeLorean, a fancy sports car with seagull wings.

“U Tried It” is a song about a girl receiving a text message from her infatuation only to find out that it was misdirected. “That’s when I realized he was a s#%*!” She gives the boy a dressing down for messing up her life. It’s the series of the familiar iPhone 6 SMS alert tone at the beginning of the song that catches listeners’ attention.

Kocher, by the way, claims she has only had one boyfriend and is focused on building up her music career.

The 21-year-old artist describes her style as a contemporary R&amp;B. To the unversed, it’s rooted in rhythm and blues, injected with dance beats, hip-hop and synthesizers. Her strong, smooth soprano voice stands out against the synthetic soundscapes while she’s rapping and dancing hip-hop.

Growing up in the Philippines, Kocher was made to take up ballet and join music camps.

At 16, she decided to be more serious in her craft by studying at Cambridge School of Visual and Performing Arts in the UK. The education gave her a solid foundation for her career, she says. In Los Angeles, she continues to take dance and acting classes.

In 2018, a family friend sent Kocher’s demo tape to a music producer in Los Angeles.

“The people whom I aspired to work with were all based in Los Angeles. It made sense for me to move there,” says Kocher.

Kocher then made her first live performance as a solo artist at the Hollywood Music in Media Awards, an organization that acknowledges original music in multimedia.

Last year, she became the front act of The Soirée during the pre-Grammy Awards night at The Roxy Theatre.

She was also the opening act for the concert of American rapper, songwriter, producer and music video director A$AP Rocky (Rakim Mayers) at the XYLO in Los Angeles.

“Swing Batter,” her second single, came out in the Ciroc commercial in the movie “What Men Want.”

In this era of collaboration, she has teamed up with American rapper Sage the Gemini (a.k.a. Dominic Woods) and girl group TLC. Kocher’s upcoming single, “Por Tiempo,” features Puerto Rican singer Javid Alvarez, a proponent of reggaeton, Latin music infused with hip-hop.

Kocher explains that her creative process is simple. “I write about how I feel. When I write, I usually sing a melody over the beat. The producer and I choose the parts we want to use and write over the melody.”

Kocher’s inclination toward rapping is reflected in her signature fashion style—loose and loud tops, a jacket that pops out with color or shine, pants or short skirts, round sunglasses, bold eye shadow and lipstick. The bright colors make her look taller than 5’2”.

“It’s very street but still a little girly. I never want to be uncomfortable because people can tell,” she says.

The artist is hands-on in putting together her wardrobe for music videos and photo shoots. “I think of a color palette first. Then I just walk into any mall or store and start from there.” In Los Angeles, she scrounges for clothes at Urban Outfitters, Fairfax Avenue and thrift shops.

This year, she plans to create more music and make more appearances around the US. “I am excited to share my music with the world and expand to performing in Philippines and beyond!” she exclaims.