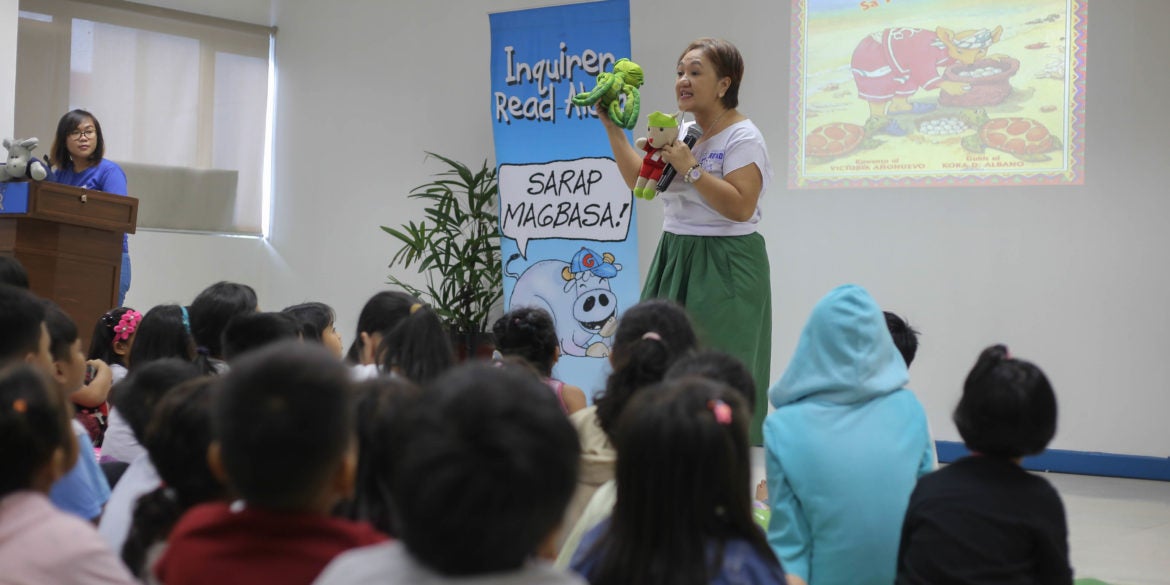 SHADES OF GREEN Storyteller Dyali Justo of Adarna House raises the children’s awareness in protecting the planet during Saturday’s Read-Along session at the Inquirer Building in Makati City. —EARVIN PERIAS

Read-Along: Kids learn to go green, save the planet

MANILA, Philippines —  Anyone – even children – can go green and help save the environment.

This was the important takeaway from the Inquirer Read-Along session held at the Inquirer office on Saturday for a hundred children who were made to understand the value of caring for Mother Earth.

The book, which was launched during the same read-along session, tells the story of a pawikan (sea turtle) that gets swept away to a land of trash where it meets other sea animals in danger because of all the human garbage.

Gaba, a returning storyteller, emphasized the role of children in taking care of the environment.

“They are young and they have their own small ways. But of course, the most important thing to do is to empower them that their little contributions can have a big effect overall,” Gaba said.

Gaba added that it is urgent to seek help and spread awareness about the state of the environment.

“It has always been an issue ever since. Our world is all we have and now more than ever we shouldn’t stop spreading the message and asking for help to save the earth,” he said.

During the question and answer session, Rivera, also a scriptwriter, said the state of the environment he witnessed on his shows inspired him to write the book. He advised the children aspiring to become writers to keep on reading.

“If you want to be able to write a book in the future, you should read a lot of books today. Then you will know what makes a good book,” he said.

Describing the illustrations of the murky underwater in the book, Arteche said she wanted to emphasize how the sea can turn scary and unsafe when it turns dirty because of human trash.

Veteran storyteller Dyali Justo of Adarna House, for her part, read “Si Pilandok sa Pulo ng Pawikan,” written by Virgilio S. Almario and illustrated by Kora Dandan-Albano. It is about a hero, Pilandok, who battles a scheming datu who threatens the existence of pawikans.

Another read-along program was held in Marawi last Friday in time for the United Nations International Education Day. The book “Water Lilies for Marawi,” which was produced to inspire learners affected by the Marawi siege in 2017, was read during the session.

Written by Heidi Emily Eusebio-Abad, translated into Maranao by Jalillah Gampong-Alonto and illustrated by Shellette Gipa, the book tells the story of children who live and cope with war.