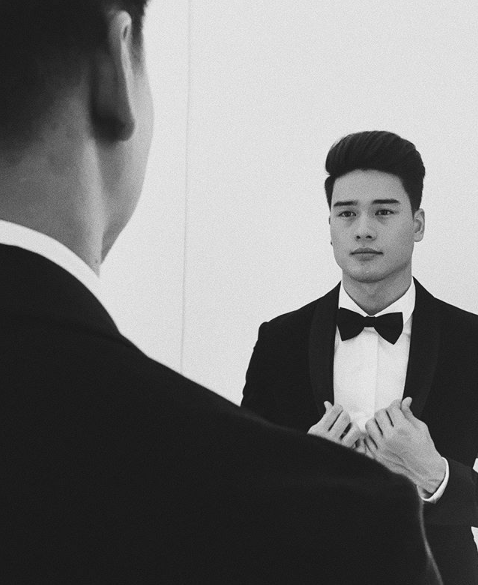 Now available to stream on Netflix is Just a Stranger, starring Anne Curtis and Marco Gumabao, about cheating lovebirds who meet in picturesque Portugal. This post, though, is not a review, but a little ode to Anne’s leading man, the always dapper Marco Gumabao.

We may not know where he’s going, but we know this: that Marco is dressed to the nines and it’s an undoubted ten.

Notice two classic elements in this sharp fit: The bow tie and that jacket’s shawl lapel, two things that may seem too smart for the style-bashful, but when worn with confidence can make you your own life’s leading man.

When shopping for a suit jacket with a shawl lapel, although seemingly counterintuitive, do consider getting one in velvet. Go black. Maybe even go an iridescent navy. When you’ve crossed the velveteen rubicon, the time you’d be ballsy enough to wear it with jeans may be sooner than you think. Ralph Lauren, as in the actual man Mr. Lauren, does it all the time. You can, too.

This was not the only time Marco pulled off serious-formal with leading man swagger.

Marco’s modern barong at the 2019 ABS CBN Ball was also a study in impeccably sharp styling. From the crisp collar to those unabashedly substantial cuffs and waist band, we’ve been seeing Marco cruise into the new decade without a loose button in sight. —JG