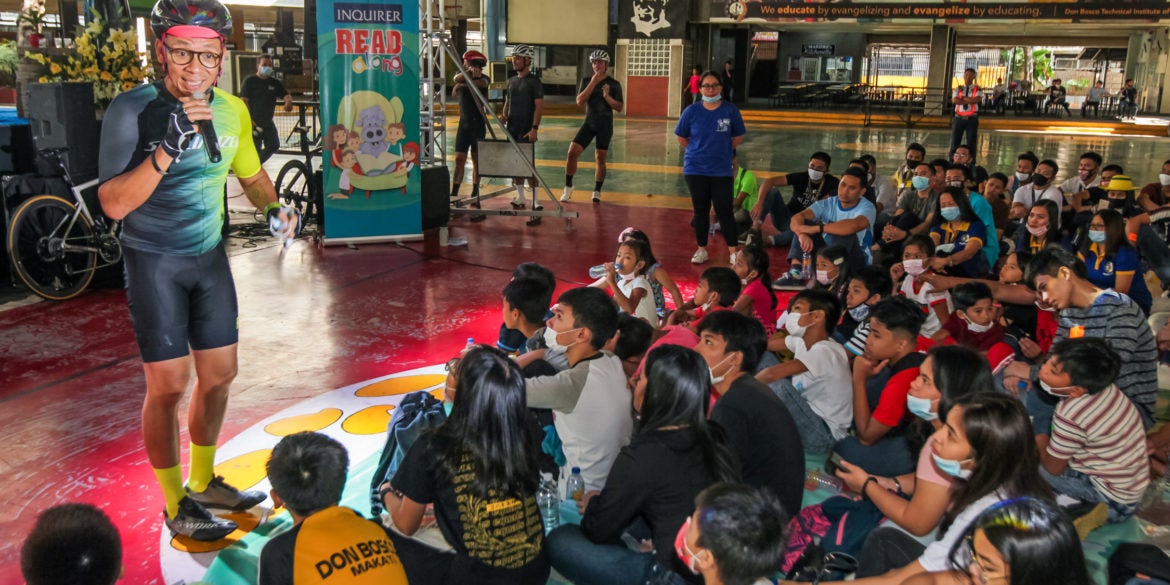 TV host teaches kids to protect themselves from coronavirus

MANILA, Philippines — TV host and Inquirer Read-Along ambassador Kim Atienza read to hundreds of children and taught them several ways to protect themselves and prevent the spread of virus amid the misinformation about the novel coronavirus (nCoV) infection.

Atienza, also a weather anchor and trivia master, showed the children the proper way of putting on a surgical mask to avoid being exposed to the virus and stop its transmission to more people during the read-along session held at Don Bosco Technical Institute (DBTI) in Makati on Saturday.

“Remember, many wrong information are circulating on social media. Many ‘experts’ say both sides of the mask can be worn, but there’s only one way to wear a surgical mask. The blue side should be on the outside,”he told the kids.

Atienza, who is also a triathlete, read “Ang Bisikleta ni Momon,” written by Rebecca Añonuevo and illustrated by Jo Ann Bereber-Gandoin, during the storytelling session, highlighting the health benefits of exercise like cycling. He brought with him fellow cyclists with their bicycles, introducing bicycle parts to the children.

Atienza, a Don Bosco alumnus, explained that nCoV is similar to having a flu and it does not automatically kill an infected individual, adding that the more vulnerable are individuals with weak immune system.

“nCoV is a flu, meaning the worst case scenario is you’re gonna get sick, but you won’t die. Not everyone is gonna die of nCoV. This is something you have to explain over and over again amid the spread of fake news,”he said.

The attendees — Don Bosco students and children from different parishes in Makati and Pasay — were given surgical masks and alcohol to sanitize their hands upon their registration to the program.

The event was hosted by Inquirer researcher Ana Roa and Don Bosco teacher Malou Sibayan, who was also in charge of the celebration’s programs.

This was the third session of the year held outside the Inquirer office. The first session, attended by a thousand children in Calvario Elementary School in Bulacan, was sponsored by Quorn. Another session was held in Marawi City last week.–ARIANNE SUAREZ, INQUIRER
RESEARCH INQ