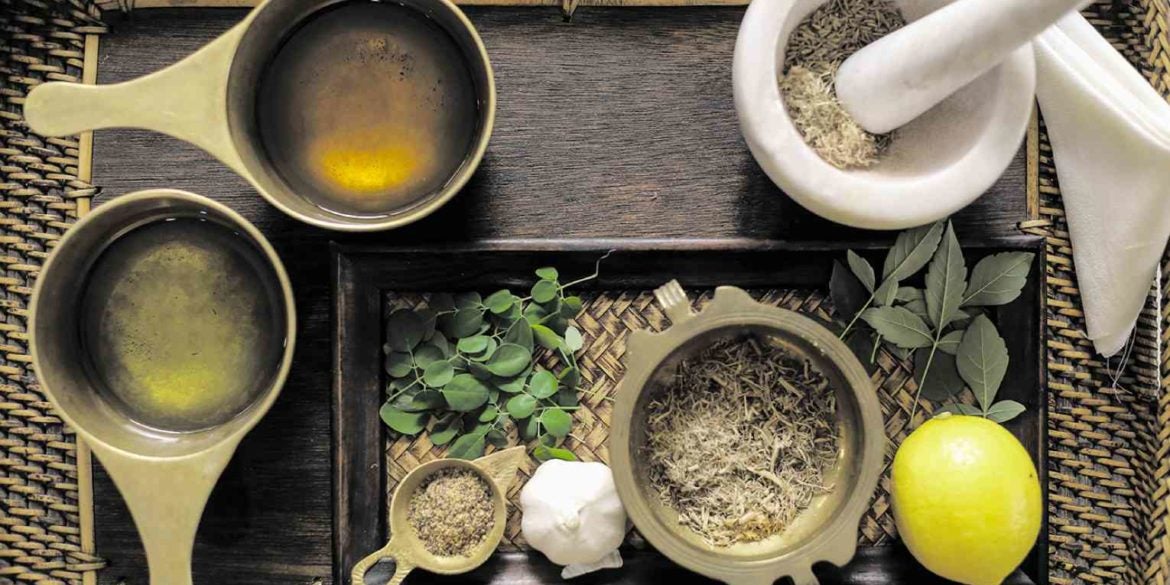 Herbs and oils are simmered for several hours to produce healing decoctions. –PHOTOS BY EARVIN PERIAS

'When people are glued to their gadgets, their posture slackens, which invariably affects the organs. This causes lifestyle diseases'

Ladda prescribed a series of therapeutic massages to remove the toxins and moisturize the skin, the pouring of herbal oil on the head for restful sleep, and a teaspoon of ghee followed by amla (Indian gooseberry) tea for the acid reflux that caused the heartburn.

Ayurveda (“the science of life” in Sanskrit) or traditional Indian medicine has been slowly attracting Filipino patients as a complement or alternative to conventional medicine, given its mind-body approach.

Its precept is that health depends on the harmony of the body and the soul, and the balance of the life forces, called dosha, which regulate the mental and physical functions.

Pitta dosha rules the digestion, metabolism and some hormonal activities.

“When one or two of the dosha are elevated, there is weakening ofthe system which could lead to diseases. Ayurveda aims to normalize them. We create balance by reducing the excesses,” explained Dr. Laddha.

A kapha imbalance is manifested by sluggishness, complacency, stubbornness, excessive mucous and excess weight. The center of the vata is in the gastrointestinaltract. The colon maintains the vata balance in the entire body. It is also associated with the nervous system. Too much vata results in sleep disorders, anxiety, dry skin, flatulence, constipation and irregular menstruation.

When pitta rages in the body, it is manifested by irritable bowel syndrome, fever, inflammation, body odor and bad temper.

On the initial consultation, the ayurvedic doctor makes a pulse reading of the patient’s condition to determine which dosha is imbalanced.

The basic treatment is the panchakarma, which means “five-step therapy.”

The foundation for the ayurvedic program, abhyanga, is a two-person coordinated massage that uses medicated oil and specific herbs formulated to address the patient’s conditions.

Nasya, the application of medicated oil in the nasal passage, clears the nose, sinuses and throat.

Vamana induces vomiting to clear blockages in the respiratory system. It alleviates throat and chest congestion and asthma.

Virechana or medicated purgation removes toxins from the liver and gall bladder and purifies the pitta dosha (stagnation). This therapy is recommended for constipation and skin diseases.

Geared toward the vata imbalance, basti is more than just colonic irrigation. Medicated ghee is inserted in the anus like an enema. Vata, manifested by cold and dryness, sluggish blood and nerve circulation, is said to be the cause of 50 percent of diseases.

The patient retains the decoction until the body absorbs the nutrients and flushes out the toxic residues.

Gas pains are addressed with the decoction enemas.

Rakta mokshan or bloodletting is the remedy for skin ailments, jaundice, gout and pitta dosha or excessive heat in the body.

Most of Dr. Laddha’s patients complain of muscle and skeletal disorders, particularly backaches.

“When people are glued to their gadgets, their posture slackens, which invariably affects the organs. This causes lifestyle diseases,” she said.

The kati basti is a pain reliever that consists of black lentil flour dough and medicated oil that is placed on the target areas. The treatment softens the hardened muscle tissue to facilitate massage therapy. Fomentation uses hot pouches with herbs for healing inflammation and improving blood circulation. The massage rejuvenates the energy and lowers the stress caused by the vatta.

Dr. Laddha also gets many cases of skin ailments such as eczema and psoriasis. She recommends a diet and seven days of cleansing through the enemas.

Insomnia, stress, vertigo, forgetfulness, lack of focus and nervous disorders — caused by excess vata — are treated with shirodhara. A mixture of herbal oil and cooling yogurt is continuously poured onto the center of the forehead, which is considered the seat of human consciousness.

Clients with weight problems undergo udvartana, a dry powder massage to regulate kapha or heaviness. The hand strokes reduce the cellulite and excess fat on the skin and also helps diabetic patients with insulin resistance.

The therapy includes a diet that pacifies the excess energies, natural remedies and lifestyle changes. Dr. Laddha cited a patient who complained of mobility issues due to joint paints. She prescribed ghee, clarified butter made from the milk of Indian cows. The patient took small doses on an empty stomach. In one week, the pains were gone.

Considered a superfood, ghee is one of the essential components of Ayurvedic medicine. Simmered in low heat and strained of the milk solids, it is left with the most important elements of butter without the irritants of casein and lactose proteins. A teaspoon before breakfast improves the digestive system, nourishes the brain and the nervous system, provides more essential nutrients, calms the mind and revitalizes the body.

Laddha noted that the medicinal ghee — unlike the commercial one — uses milk from pure-bred Indian cows. These produce a2 milk, whose protein structure is similar to human breast milk. Unlike a1 milk, commonly found in the market, which has a protein that causes food intolerance, a2 milk is easily absorbed in the body.

Laddha observed that the main causes of her patients’ ailments are poor, imbalanced diet, excessive sweating, stress and the sedentary lifestyle.

“Eat healthy and homecooked foods,” she recommended. “Everybody faces stress. We have to learn to adjust to the situation and move on.”