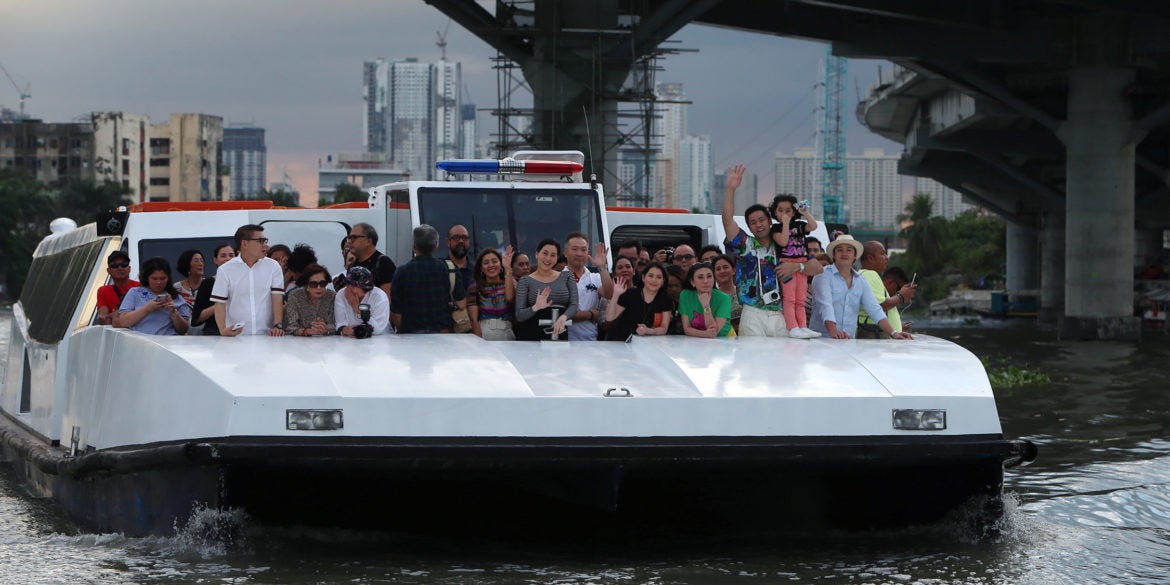 The next traffic buster? Cruising the Pasig River

Ordinarily, just the thought of driving from one destination to the other during Manila’s rush-hour gridlock is enough to make our head explode.

But a leisurely cruise up the Pasig River sounds like just the thing to decompress after a hard day’s work, while getting primed for the evening’s sanuk, as the Thais say.

Probably why Tourism Secretary Bernadette Romulo Puyat (whose genius idea it was in the first place) organized this exploratory river tour from the Guadalupe ferry station to the Escolta station, where we would be met by the man of the hour, Manila Mayor Isko “Yorme” Moreno, for an exclusive guided tour of Intramuros.

The arrival of dermatologist to the stars Vicki Belo with husband Hayden Kho and children Cristalle and Scarlet Snow at the embarkation, surrounded by a gaggle of bloggers, vloggers and blaggers, suggested the trip was intended to be highly Instagrammable, a photo-op for the social media multitudes.

The presence of Tatler, Esquire and other high-zoot glossies suggested the Department of Tourism (DOT) meant to entice the smart and snooty set to take the lead on this initiative—“mass follows class,” as Imelda used to say. (Maybe they could catch a glimpse of colorful riverside neighborhoods like Hulo or Bacood that they would otherwise not be caught dead in.)

Suitably fortified, our merry party weighed anchor just as Metro traffic was about to peak, and we were off in two of the Pasig River ferry service’s largest vessels, each seating 150 souls in air-conditioned comfort, complete with piped-in music and WiFi.

“This is a boat built by Filipinos,” our salty sea captain, PN Commodore Eduardo Bondad (ret.), proudly said. “It has two hulls, like an airplane, with twin Cummins engines, 355 horsepower each, so we have a total of 710 horsepower.”

The as-yet-unnamed Ferry 3, he revealed, was donated by Dito Telecommunications—the so-called “third telco” owned by businessman Dennis Uy and a Chinese state-run telecommunications company. The other two large boats were donated to the MMDA by Globe and Smart, respectively.

The boat, he added, uses a displacement hull design that smooths out the waves and is capable of up to 24 knots—about 42 km per hour—although our cruising speed was limited to less than half that, the better to enjoy the view.

The trip would only cost P75 on a normal day, he added. Factor in the traffic, crowds, chaos and aggravation of the usual land-based commute, and it was a bargain.

Having done this for 20 years, the 72-year-old Bondad knew every bend in the river, and was a veritable font of obscure trivia regarding the Pasig and the sights that lay along it.

Standing at the bow offered the best view. You could catch a surprisingly inoffensive whiff of the river water, unusual this close to summer, according to the commodore. Inquirer photographer Edwin Bacasmas opined this was thanks to the late Gina Lopez’s tireless efforts to revive the river when she was head of the Pasig River Rehabilitation Commission. 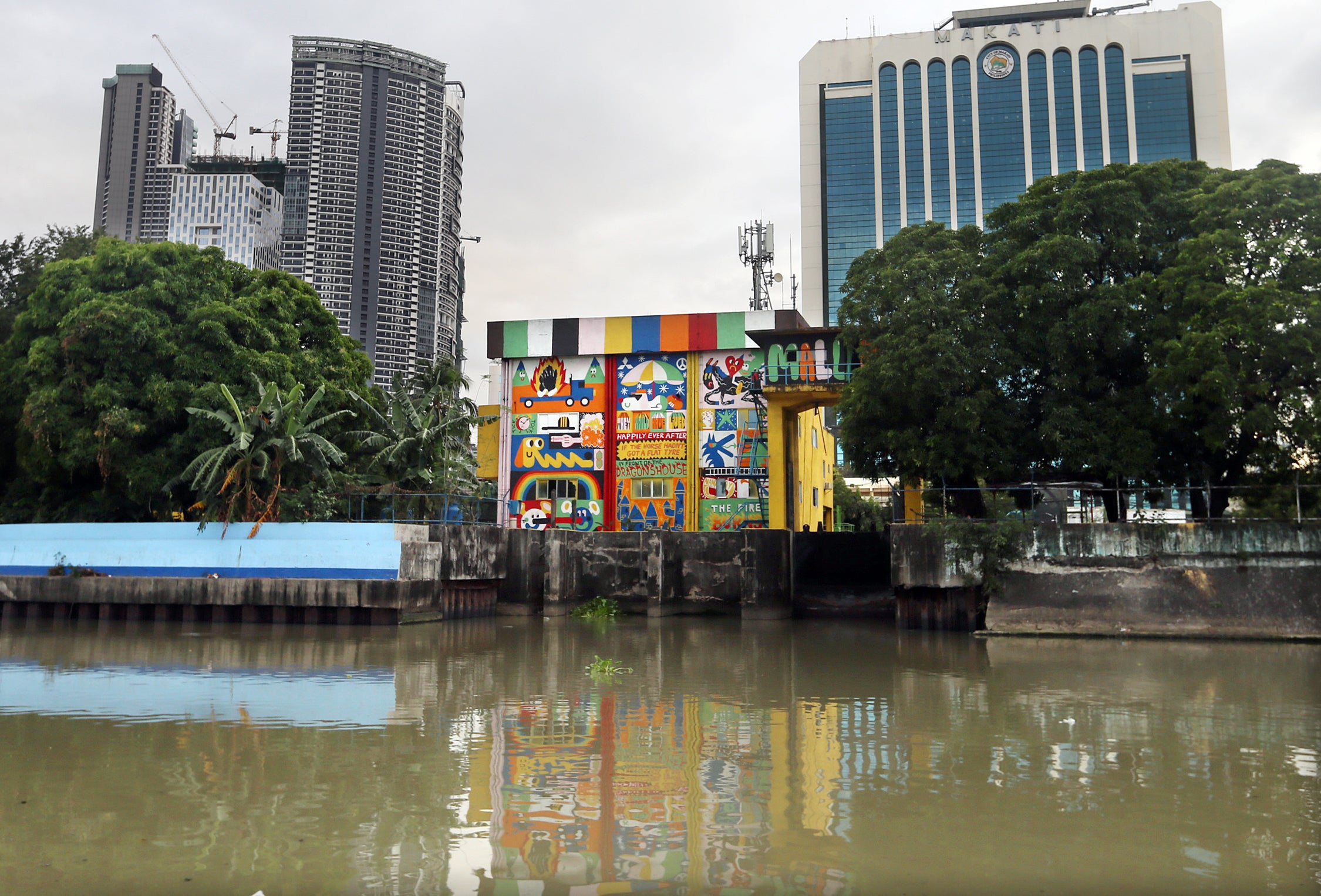 “I never saw the good side of the city/’Til I hitched a ride on a river boat queen.”The lines from the old Creedence song came to mind as we cruised along seeing the sights: people on the shore waving, children diving off a pontoon into the brown water, colorful murals painted under the Pasig River Art for Urban Change program of the MMDA.

Along the way were flocks of Chinese egrets on their annual migration (hopefully not carrying the avian flu; we have enough to worry about as it is).

The chaos of the city was well within view, but somehow we felt very far from it.

Every bridge we passed—the Makati-Mandaluyong bridge, Lambingan, Nagtahan—was choked with bumper-to-bumper traffic. The only traffic we had to worry about was the occasional string of barges carrying sand, or the rare private boat ferrying passengers from one bank to the other.

Bondad (no relation to the guy who let Catriona go, he said, but possibly related to Cat herself, on her mother’s side) would point out such oddities as the “Sin Village” (tenement housing built by the late Archbishop of Manila), the ancient heritage balete tree belonging to the Lichauco family, and just adjacent, the home of the late Fr. James Reuter, S.J. of “Radyo Bandido” fame.

Presently we arrived at the restricted stretch of the river that ran through the Malacañang compound, and he told the photographers to put away their cameras. (Apparently, this part of the river is closely monitored with high-resolution CCTV cameras, and for security reasons, photography was strictly verboten, as our Philippine Coast Guard escorts made plain.)

The commodore pointed starboard to the dock where, under cover of night, his story goes, former President Ferdinand Marcos would be spirited away by speedboat to the BRP Ang Pangulo, the presidential yacht anchored in Manila Bay, where the American actress Dovie Beams would be waiting.

The Ayala Bridge, designed by Gustave Eiffel, marked where the high-security section of the river ended.

We had made good time: It had only been 40 minutes since we set sail. Five minutes later, we finally arrived at the Escolta station, where Mayor Isko Moreno was waiting.

By this time, Scarlet Snow was all Instagrammed out and refused to board the “tranvia” (actually a repurposed Nayong Pilipino minibus) that would take the VIP contingent to Intramuros.

The little girl staged a sit-down strike on the steps leading up to the Binondo Friendship Bridge. Neither her parents, her sister, nor her yaya could persuade her to board the tranvia.

Finally, Yorme took matters into his own hands, flashed his best bedimpled smile, and taking her by the hand, coaxed little Scarlet back into the fold.

It was a demonstration of star power and personal charisma that would be repeated throughout the rest of the tour, as throngs of ordinary Manileños—most of them squealing school and office girls—besieged the mayor with requests for selfies, all of which he graciously accommodated.

As for Intramuros, nothing else need be written here, except that every Filipino should visit the Walled City at least once in their lifetime, to commune with our country’s rich history.Thus ended the tour.

Note: As of now, according to the Commodore, the ferry’s last trip leaves Intramuros station going to Pinagbuhatan terminal in Pasig City at 6 p.m. The DOT is still in talks with MMDA to possibly extend service hours. In the meantime, it’s probably best to try this tour in reverse: Take in Intramuros during the day, possibly include a side trip to the emerging Escolta hipster hub, and then take the ferry to Poblacion for an evening’s relaxation.