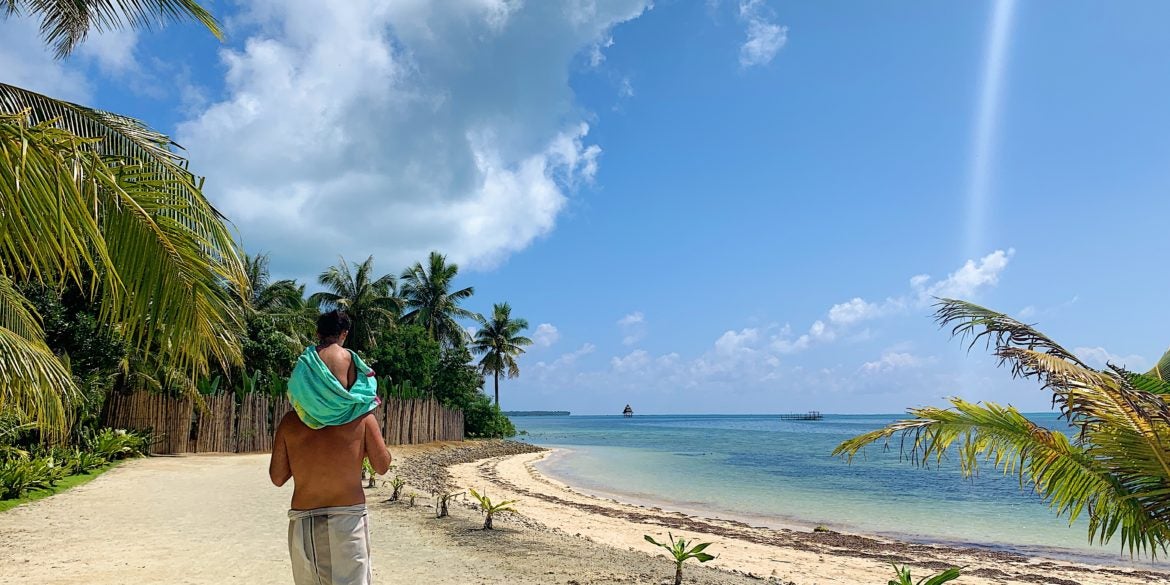 We were going at the wrong time—the rainy season. It was the warning we had received from friends on our way to Siargao, a teardrop-shaped island in Surigao del Norte, known as a global surf spot and home to the annual International Surfing Cup. It’s a two-and-a-half-hour direct flight from Manila to Sayak Airport.

Pelting rain greeted us when we arrived, the kind that fell thick on the ground and formed puddles of mud. Even the locals were surprised by the downpour; it was nothing like they’d seen in years.

But there was no turning back now. I was partially blaming myself for plotting this trip and bringing my little family here. But then again, we were lucky to have escaped the ashfall from Taal Volcano’s eruption.

Our Airbnb was a 40-minute ride from the airport. As we inched our way, the vegetation became heavier and denser, painted in an endless series of rugged evergreens. “Look, Mama, a mountain!” said my almost 3-year-old daughter, bewildered at the sight of the expansive mountain range, her eyes no longer glued to the small mobile screen but on the vastness of nature.

Throughout the circus act of parenting, there is always this want and need to raise a self-reliant child. We’ve been traveling with her since she was 5 months old, but on this particular trip, we were more conscious and deliberate to let her experience a “spartan” way of living—or at least a semblance to it. We wanted her to engage in a different kind of environment, far from the confines of her city-living routine.

It was difficult to calibrate our mindset. Immersion was difficult for us adults! We were the first ones to complain, more so since the island is still deeply provincial.

For instance, it lacks the basic stuff, like access to fresh drinking water and consistent power supply (there were bouts of brownouts on some parts of the island). It also lacks the convenience of a supermarket. Though the island makes efforts on waste segregation, disposing is relatively tricky since garbage isn’t collected regularly. I was told locals normally have to burn their own trash, except for glass, which is crushed in a recycling machine and turned back into sand. Modest but charming

Our home base was a modest but charming two-bedroom guest house, with close proximity to tourist spots in General Luna (a 10-minute walk from Cloud 9). It was like a ray of sunshine with its whitewashed walls and weathered blue Mediterranean-style shutters, a counterbalance to the rawness of its surroundings.

It was cozy, with soft bed linens and tasteful furniture sourced locally. And a bonus: it was near Harry’s Corner, where you can have wonderful healthy breakfast and the best burgers on the island. (See sidebar.)

We spent nights at home cooking dinners with local produce bought from roadside stalls. We slept without air-conditioning (although available) with the windows wide open, since the air was so fresh and the breeze crisp. You could hear the earth breathing, and insects buzzing. The smells of leaves and the wet ground were glorious. Our neighbors had three grown pigs who loved mud baths. A hen and its chick clucked the whole day. A rooster, the Nazi alarm clock, performed its daily duty and woke us up at dawn. We were now early risers! There were the lizards and frogs my daughter later called friends.

When the downpour had eased, we ventured out into the island. Our first stop was Cloud 9, known for its legendary barrel (tube) waves and its great view of the rolling Pacific Ocean. The sound of waves was soothing and watching it break on the shore was even more beautiful, therapeutic. It does wonders to your brain frequency and soul.

We spent the days mostly on foot (slippers optional); on other days, we rented a tricycle. It’s easy to navigate the island by motorbike—my 6’3” husband drove, while my daughter and I buckled up in the back seat. Never had I imagined us doing this! My daughter would spontaneously break into a song, her eyes sparkling with excitement. We took delight in the carefree pace. Though remote and unsullied by developments, there are surprisingly all kinds of activities to choose from in Siargao. From surfing lessons, kite boarding, horseback riding, yoga retreats to diving in cliff formations, snorkeling in lagoons with stingless jellyfish, kayaking in scenic mangroves, day-tripping to neighboring secret beaches (a must!), and relaxing in tide pools.

We explored nearby islands: Daku Island, Guyam Island, and the unmistakable Naked Island, with its white coral sands. There were mostly sun-bathers, but barely a handful. And the shades of blue from the skies to the sea were unimaginable!

Our ideal day, however, was spent basking on the beach, bathing in the rawness of it all, appreciating the slow rhythm of life unfolding.

Our daughter was more capable at adapting than we realized. I found her interacting with other kids and even making new friends with dogs. She converted almost instinctively into an island girl, comfortable wading by the shore all by herself.

Visitors were mostly from global capitals. We met foreign families trading city living for a quieter life on the island—their departure dates unknown.

We were almost halfway through our 10-day journey. What we didn’t quite expect was, we needed this trip more than our daughter did.

Most of our days were spent and absorbed in the “out of doors,” and we learned to appreciate and embrace the intangible, of life’s ebb and flow (like the waves), carrying indelible and important lessons with us back home. —CONTRIBUTED

Where to eat in Siargao

Deli Street: For morning baguettes, croissants, pan chocolate and cheese to take home or bring to the beach.

Lamari: It has flavorful Mediterranean-inspired dishes which you can enjoy by the pool.

Harry’s Corner: For the yummiest burgers and butifarra (Spanish sausages). They also have a lovely lounge area and reading nooks.

L’Osteria: Good authentic Italian pasta and pizza for lunch in a lush garden overlooking the beach.

Bulan: Come here for dinner to savor Italian Napolitana-stye pizza in a nipa hut setting. It has a good wine selection from Sicily.

Kalinaw Resort Restaurant: One of the oldest properties in the island facing the lagoon. Watch the sunset or have a romantic dinner while sampling the freshest catch of the day. —STEPHANIE C. ROTOLL