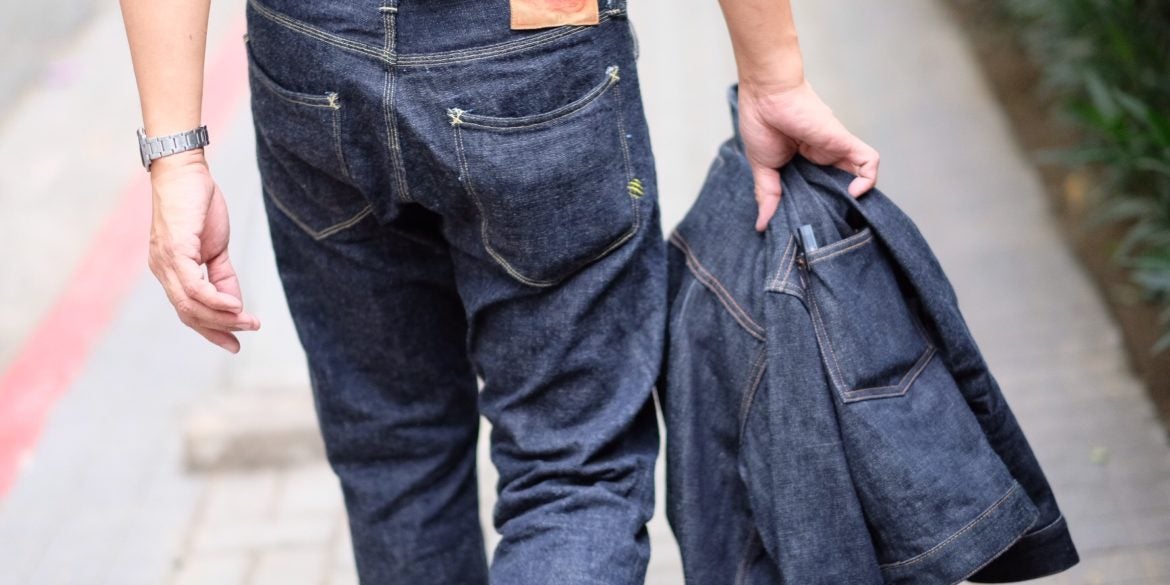 The fit of these jeans harks back to the ’50s.

He was probably wearing them that night, toward the end of the school year, when he and a couple of friends ran their car into the back of a flatbed truck

This happened the year before martial law was declared.

One morning, early in our junior year of high school, Pico showed up wearing a brand-new pair of Levi’s 501s.

This wouldn’t raise any eyebrows today, but back then, the only way you could get genuine 501s was at a PX store—a store selling imported, likely smuggled, items. A couple of us who had never heard of James Dean or Marlon Brando laughed at Pico’s jeans. Not only were his trousers straight-legged, they looked a couple of sizes too big for him. They were also board stiff, and a dark shade of indigo.

Remember, this was the early 1970s. Most of us favored bellbottoms, the wider the flare the better. They were tailor-made, and fit us like a glove. The materials du jour were soft brushed denim, corduroy or hopsack, available in several bright colors— except dark indigo. (Mercifully, double-knit polyester was still a few years away.)

Pico stuck out with his cowboy jeans, but he didn’t care. He just looked at us with a goofy grin while we made fun of his pants.

He wore them every day that school year, never seemed to wash them except that once: To shrink them, he soaked them in hot water and wore them while they were still damp, until they dried on him. After that, they weren’t too loose, or too long anymore. They actually started looking good. He wore them with a white T-shirt and his black school shoes most of the time. After lunch we all went to the back of the gym for a smoke. Pico would sit crosslegged on the grass, puffing on a Winston, wearing his eternal 501s and that goofy grin.

The school year wore on, and Pico’s Levi’s became a visible record of the passage of time.

No longer dark indigo, they had faded to a nice medium blue, more from wear than from washing, darker around the seams and lighter in the seat and the knees, criss-crossed with fade patterns behind the knees, around the crotch, at the bottom where they were still a bit too long and stacked on top of his shoes.

They were coming along nicely, developing character, and a lot of us began to rethink our allegiance to brightly colored bell-bottoms. We were all listening to Neil Young’s “After the Gold Rush.” The back cover of the album showed his rear encased in well-worn jeans, patched with a crazy quilt of calico and paisley rags.

Pico’s Levi’s still had a way to go to get to that state of utter, insouciant cool.

They would never get there. He was probably wearing them that night, toward the end of the school year, when he and a couple of friends ran their car into the back of a flatbed truck parked on a dark street in New Manila. They had been partying, probably got the munchies, and drove out for a bite.

Pico was in the shotgun seat, and took the brunt of the impact. He died on the way to the hospital. Knowing his ways, I like to think that he was feeling no pain when they hit.

At the wake, the coffin was half closed, and I don’t remember if they buried him in his Levi’s. I just remember thinking that he would have liked that.

What’s the point of all this “down memory lane” then?

Every so often I still think of Pico and his eternal jeans, frozen at 16 while the rest of us have moved on.

Today’s skinny, preworn jeans look ridiculous on my oldman ass, but I’m not quite ready for dad jeans yet.

Instead, I have just dropped a ridiculous amount of money on a new pair. They’re not Levi’s (though I gather they recently brought back the shrink-to-fit 501s). These are meticulously sewn on vintage machines by a small boutique outfit called Leon Denim, from 16-ounce raw selvedge denim, spun from premium cotton from Zimbabwe on an ancient loom by the Nihon Menpu Textile Co. in Okayama, Japan. (Since the last textile mill making selvedge denim in the US closed in 2018, the Japanese have totally cornered the market on this highly sought-after product.)

The generous, somewhat boxy fit harks back to the 1950s. A wardrobe person might have specced something like this for Clark Gable in “The Misfits.”

Right now, they’re stiff as a board, a deep, deep indigo, a couple of inches too loose and about four inches too long, necessitating wide cuffs—the better to show off the tell-tale selvedge.

At some point, I’ll probably do as Pico did and soak them in hot water and wear them while they’re still damp until they dry to a custom fit. Or maybe I’ll just wear them for six months first, to see if they’ll fade better that way.

I don’t know—there’s a wide divergence of opinion in the global raw denim community. I’ll have to check the forums again.

I’m not quite sure what Pico would have made of this denim fetishism.

He probably would have just said, “Whatever, man.” INQ