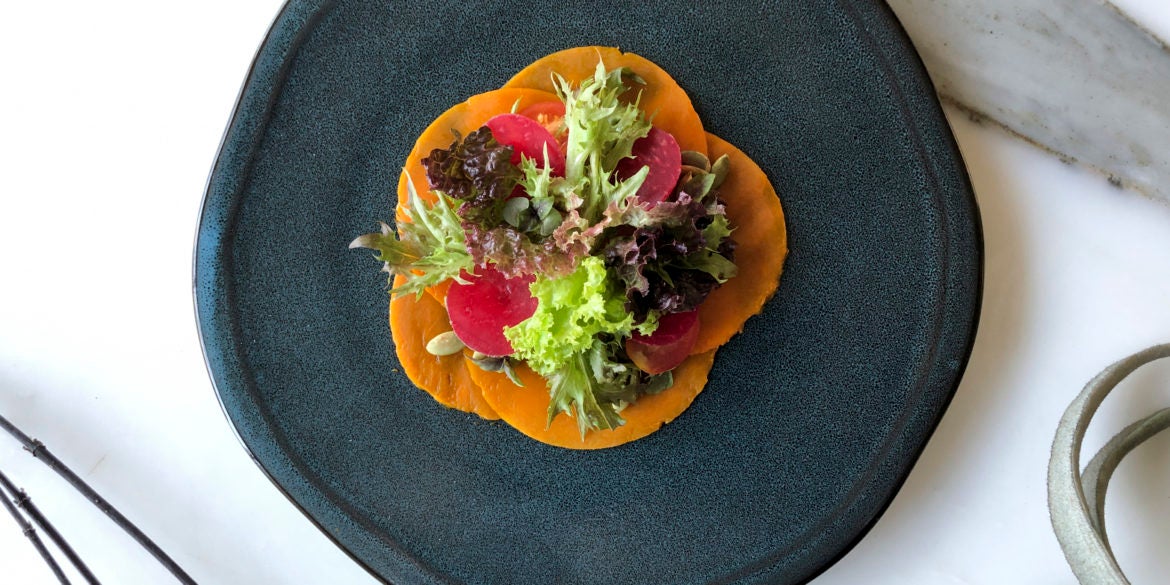 After going on a plant-based diet for over a year, Discovery Primea general manager David Pardo de Ayala not only lost 10 kg but also brought down his cholesterol and triglycerides to normal levels.

“My energy is higher. When you take in animal protein, you feel heavy and get hungry sooner between meals,” says the hotelier.

He adds that executive chef Luis Chikiamco has been spoiling him with experiments on vegan dishes.

Pardo de Ayala, a former chef himself, cooks at home and eggplant is one of his favorite ingredients. “When cooked right, it develops a custard-like texture that pairs well with other ingredients and sauces. Eggplant is also present in French, Italian, Greek, Middle Eastern and Japanese cuisines,” he says.

Catering to his boss’ discerning palate, Chikiamco whips up an appetizer—a simple eggplant with bread crumbs and katsu, a Japanese-style barbecue sauce. The taste is a cross between French fries and vegetable tempura. (It’s more of a lacto-ovo vegetarian dish since the binder is egg white.)

While some restaurants offer boring or tiresome choices of steamed vegetables, salads and fresh fruits for plant eaters, Discovery Primea has become one of the most vegan-friendly places. It has a vegan fine-dining experience at Flame, and flavor-focused, plant-based comfort foods at the salad room at Tapenade.

Vegans/vegetarians and meat eaters can happily coexist and be satisfied in the same room.

Flame Restaurant introduces the five-course vegan dinner menu, which is given the same attention to technique as in caviar, foie gras and wagyu beef, explains Pardo de Ayala. It’s called the Tasting Menu because the food is plated in small but satisfying portions.

Chikiamco applies techniques he learned at Culinary Arts and Hotel Management at L’Institut Paul Bocuse in Lyon, France. “We try not to make the usual dish of vegetables mixed with tomato sauce or pasta. We offer a multicourse menu which applies different techniques per element,” says the chef.

The meal starts with clean-tasting hijiki, wild Japanese seaweed that is braised either with soy sauce or coco aminos, a gluten-free substitute.

The salad course is pumpkin carpaccio with micro greens, tomatoes and pumpkin seeds for a little crunch and a kick of wasabi. Finely sliced pumpkins are roasted for depth of flavor.

The tomato soup, enriched with coconut, is followed by a protein dish of lentils.

The main course, cauliflower steak embellished with earthy porcini mushrooms, is the answer to the Filipino penchant for meat. It is meticulously prepared sous vide, cooked for two hours by vacuum sealing and encrusted with porcini powder for a meaty flavor.

The cauliflower is then sautéed with leeks in olive oil for a mild, onion-like flavor. It’s served on a bed of risotto.

The meal ends with a light mix of granola topped with fresh fruit and cooling coconut yogurt with calcium powder for a tarty taste. “It’s fermented to develop more flavor. We get the feel and taste of yogurt,” says Chikiamco.

“We make the dishes tasty without the dairy and eggs,” says Chikiamco. The stocks for Tapenade’s soups and paella are a medley of vegetables and mushrooms.

The burger dishes are packed with vegetable protein called Beyond Burger by the American company Beyond Meat. It is as chewy and juicy as ground beef. This plant-based burger is served on top of flat bread with hummus, arugula and drizzled with balsamic vinegar. The classic cheeseburger goes with vegan cheese made with soy.

Hot dog lovers can try Beyond Sausage on focaccia with lentils.

The eggplant lasagna is enriched with Beyond Sausage and vegan provolone which uses a plant milk to approximate the flavor of aged cheese.

Rice eaters will be happy with the paella with grilled artichokes and asparagus.

“People think that they are making a sacrifice if they don’t eat meat. They’ve embraced these plates because of the rich flavors,” says Pardo de Ayala.

Vegans and meat-eaters can reach a compromise at the salad room. Here, the greens are always fresh and varied ranging from baby arugulas to romaine hearts.

To Filipinos who equate salad to the Caesar, there’s a separate station for it.

Nonvegans will delight in the cold cuts of prosciutto, salami Milano and pastrami, paired with their favorite cheeses (brie, blue cheese and manchego), dried fruits and nuts. These can be tossed with the salad or used as toppings for the assortment of breads.

The tapas bar is laden with paprika mushrooms, chorizo, meatballs, rice croquettes with mozzarella and tomato sauce and three-cheese croquettes.

Then there’s a section for composed salads which are packed in little jars such as quinoa and cannelloni salads, and mini sandwiches such as barbecue chicken sliders, vegetable wraps, roast pork and cheddar cheese, and Thai spring rolls.

“You can make a meal out of the salad room. It’s the gateway to the rest of our menus,” says Pardo de Ayala.—CONTRIBUTED