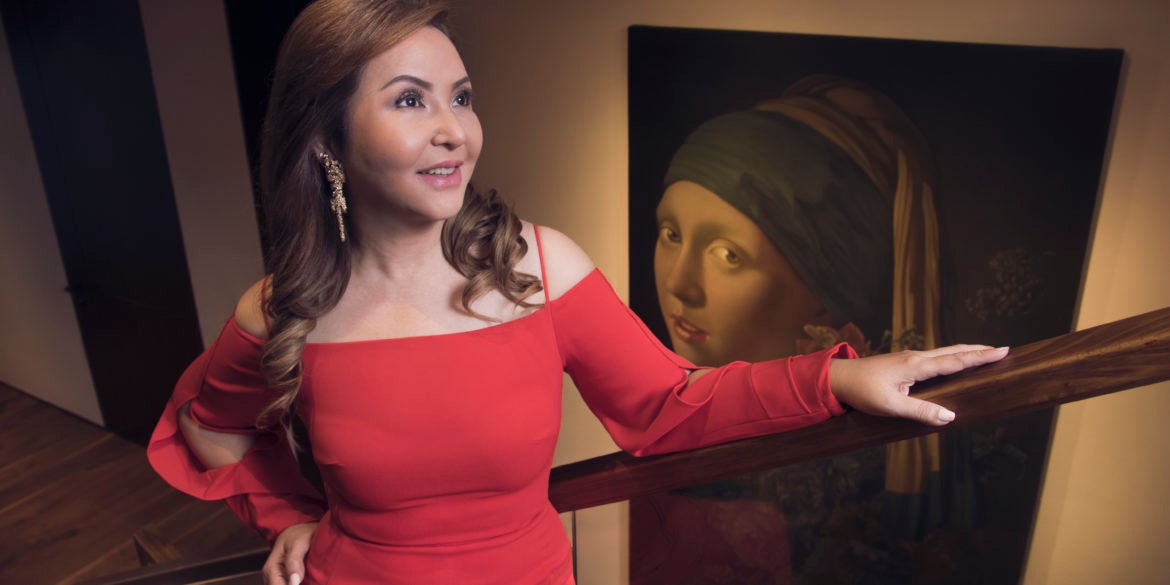 Why Small Laude has big YouTube following, and it’s getting bigger

Spoofing Vogue’s “73 Questions”—short and snappy celebrity interviews that have taken social media by storm—socialite and now social media star Melissa “Small” Laude channeled style icon Blake Lively as she flitted about in a white trumpet-sleeved top tucked into flared jeans with playful slits up to the knees.

The higher the heels, the closer to God.

How do you lose weight?

Do you have a dream job?

That doña’s affluent lifestyle is routinely lampooned in Laude’s YouTube channel, which has attracted 14,300 subscribers and advertisers in its first five months.

“It” girls Isabelle Daza-Semblat and Georgina Wilson-Burnand told her that they wanted to portray Small and her eldest sister Alice Eduardo, a construction magnate and philanthropist, in one of the vlogs.

The Inquirer asked what it was like to be her. Laude quipped, “You wear a designer outfit, put on a rock, carry a Birkin and get into a nice car.”

A regular at parties of Manila’s café society, she is famous as much for her exuberance as for her dazzling designer outfits, from such brands as Marchesa, Dior, Balmain and Celine. Her latest purchase at press time was a Balmain gown with tiny crystals.

During this interview in her new residence, designed by architect Eduardo Calma, Laude sported a Banana Republic linen shirtdress, her pambahay of preference and which she, therefore, had in many colors, and barely there Sam Edelman leather thongs. The look would pass for simple, except for the gold earrings and, on her wrist, a Cartier Ballon Bleu.

Laude’s description of her signature style is expectedly unapologetic: “Kikay (frou-frou) and bedazzled.” Fashion classics don’t stand a chance and are dismissed as “too boring.”

She gave us a tour of the six-level house whose structure, Calma explained in a phone interview, was dictated by the uneven terrain. The facade is unmistakably Calma. Instead of the typical box, the house is a play of overlapping volumes of levels or stories partially revealing the rooms. Each level has a deck used for outdoor entertaining or as conversation space, and is embellished with a mini garden by landscape artist Ponce Veridiano. There are two scenic elevators.

“Last May, we celebrated our 25th-and-a-half wedding anniversary on the roof deck,” Laude said.

And a half? “We were married in October 1993, but the house wasn’t finished last year.”

Laude went to Milan to select the furniture—all branded, echoing the way she puts together her fastidious wardrobe.

In the living room, cloud-shaped lighting fixtures by Hench make a powerful statement. There is a Minotti sofa, Rimadesio console, Fendi coffee table, Poltrona Frau stools at the bar.

Her personality is echoed in the theme rooms. She furnished the parlor with a first-grade salon-standard sink for washing her hair. All done in pink, the room is accentuated with fluffy white pillows and more cloud-shaped lighting.

She taps different hairdressers and makeup artists to do home service for every event.

In the master bedroom, her love for logos is evident in the Fendi bed frame; in the anteroom, she has Hermès throw pillows and a Fendi area rug.

We sat with her in what she said was her favorite space, the jungle-theme lounge enveloped in wild banana leaf prints. She confessed that it would have been too expensive to go all out with the wallpaper; hence, she had the ceiling painted with green stripes. The lounge brings in a view of one of Veridiano’s deck gardens.

“I can be calm and pray here, where I feel nature—the rays of the sun, the breeze,” she said.

The second of four siblings, Laude was business-minded even in her youth. In the 1980s, she and sister Alice set up a garments export company, Legala, which specialized in embroidered parts. They have closed the business, but the sisters remain close, talking every day on the phone.

Laude met future husband Philip Laude, scion of confectionery makers, through a common friend. For 26 years, they lived with his Chinese-Filipino parents. She easily adjusted to the conservative Chinese-Filipino lifestyle and has nothing but praise for her in-laws who, she said, pampered her four children—Christopher, Michael, Timothy and Allison.

“There was never any friction,” she said. “My in-laws are easy to be with. They let me be. Amah is hands-on with my kids.” She is going to miss their company, she said, even if their new house is only next door.

Philip has been always the strict parent. A natural-born entrepreneur, she heads Timson Printing, named after Timothy and Allison, which makes tarpaulins.

The couple also owns a brokerage firm, Timson Securities, where Laude is vice president and treasurer. For many years, she oversaw the staff and signed all transactions. But these documents were soon being accomplished online and she found herself with a lot of spare time. Broadcaster Karen Davila, a close friend, suggested that she start a vlog.

Last August, Small filmed her trip to Los Angeles and Beverly Hills, where the Laudes have a mansion. Beverly Hills happens to be her favorite shopping destination. “Unlike Paris, I find everything I want there—and all in my size!” she said. “The stores are also next to one another. The only downside is the stiff sales tax.”

Her debut vlog showed the neoclassical Laude mansion with a huge garden and a lap pool. It documented her shopping trips, even to the grocery stores, and her coming home from Target in a Lamborghini. Back in Manila, she sent the footage to a production team for editing. The vlog registered 41,000 views.

Her most popular vlog so far is a makeup tutorial with singer/actress Claudia Barretto, posted two months ago. Mimicking Valley Girl talk, the 52-year-old Small has been cracking up viewers—155,000 of them last year. For good measure, she dangled an incentive: 50 makeup boxes from Sephora that cost $45 each will be given randomly to vlog subscribers.

The cost almost made her faint, Small said, “So we have to check and double-check that the recipients are, in fact, subscribers.”

Broker friends gave her access to mansions for the vlog on “Celebrity House Hunting in Beverly Hills,” which shows the lavish Beverly Hills lifestyle and has been viewed 51,000 times. Her recent vlog, which featured Laude and actress Joy Ortega shopping for charity in Divisoria and visiting Manila Mayor Isko Moreno, garnered 50,000 views.

A famous brand asked her to promote its exotic leather bag in her vlog, each costing a few million pesos. Laude declined because she has been collecting another brand, Hermès, since the ’80s.

The vlog is fueled by Laude’s vivacity, infectious humor and lack of pretension. It generates encouraging comments. A cancer patient wrote that she laughed at one post and fell asleep with a smile on her face. “A few others had lost their jobs and were depressed,” Laude said, “but wrote that they got a kick from watching.”

Though she’s not a celebrity in the traditional sense, her Instagram account—with over 60,000 followers—has not gone unnoticed by advertisers. One offered her a deal to endorse a jet plane, but she declined, saying she “wasn’t ready.”

Beneath this joie de vivre and flash is her uncomplicated character, Laude insisted. She recalled a family trip to Spain where she was utterly in awe of the aqueduct of Segovia. Her companions were unimpressed, she recalled, “but I couldn’t take my eyes off it until it was too far away to see from our tour bus.”

And for all her fascination with Rodeo Drive, she swore that her most memorable holiday was one she had with family and friends, in Capri.

This last one should have made it to her 73 Questions:

Is there anything she can’t live without?

“My foldable religious art. I carry it wherever I travel. For protection.”